In a series of far-reaching competitions for university students, the FAA has opened the gates on innovation for new aircraft and airport infrastructure design.

Announcing the winners of its Design Competition for Universities, the FAA awarded three prizes in the Electric/Hybrid Electric Aircraft Competition.  In doing so, it acknowledged the pioneering work of the CAFE Foundation and NASA in promoting the original Green Flight Challenge, generously supported by sponsorship from Google.

To expand on the promise of the GFC, the FAA requested that competition entrants design, “…a regional size aircraft (25-50 seatclass) that uses electric or hybrid-electric propulsion with a cruise Mach of 0.72 – 0.8, 500 nm range and entry into service by 2025.”

Short-hop fliers are in for a treat if these designs reach production.  Georgia Institute of Technology and the University of Virginia tied for first place, showing unique approaches to the challenge, while Arizona State University took third place for its dualistic modes of propulsion.

The Georgia Tech team – tied in its category with the University of Virginia – is based in the Institute’s Aerospace Systems Design Laboratory.  Its hybrid-electric NXG-50 would carry up to 50 passengers on short- to medium-range regional routes.  It is projected to meet cruise and field length requirements while reducing life-cycle energy consumption 15 percent.  Lifetime emissions would be 15- to 20-percent lower than those for a CRJ (depending on whether energy used to recharge the cells was from clean or dirty sources).   Georgia Tech estimates a total life-cycle cost 4.2 percent lower than that for the Bombardier craft. 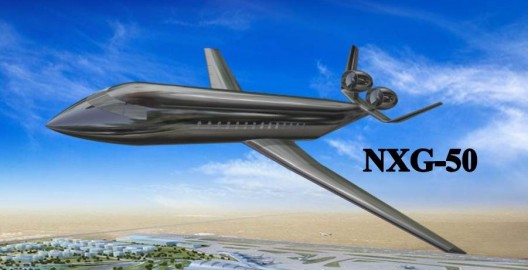 Based on the Bombardier CRJ200, the airplane’s two electric fans would be driven through a gearbox by a lightweight electric motor getting its motivation from an 8,200 shaft horsepower turboelectric generator and a further 1,100 shaft horsepower from lithium-ion batteries.  With the fans shielded by the U-shaped tail, noise would be an estimated 13 decibels lower than a CRJ.

The generators would also recharge the 13,800 pounds of batteries under the aircraft’s floor and provide power to all subsystems.  This would simplify the aircraft by eliminating hydraulic and engine bleed systems.

The University of Virginia’s Sustinere design uses a turboelectric distributed propulsion (TeDP) concept, with two 2,500shp turboshaft engines under the wing that would generate electrical power to drive six 30-inch, 3,300lb-thrust fans wrapped in an elongated duct on the upper fuselage.  The fans pull air over the fuselage boundary layer to reduce drag, and being tightly clustered, “minimize asymmetric thrust and increase rudder effectiveness.”

The design has no batteries as part of its hybrid propulsion system, the designers feeling that TeDP’s ability to reroute power between fans would safely accommodate loss of an engine or motor.

An extremely ambitious design, Sustinere has underwing turboshafts that drive cryogenically-cooled superconducting generators.   Other TeDP concepts use liquid hydrogen for fuel and cooling, although all of these are still hypothetical.

Sustinere burns jet fuel and carries hydrogen only for regenerative cooling, using liquid hydrogen circulated through the generators, motors and converters and a heat exchanger, with the small amount lost to evaporation being replaced between flights.

“Two options were feasible: a storage tank system in which the used LH2 is released into the atmosphere after one cycle or a circulatory system that uses a regenerative cycle to reuse the liquid hydrogen. The release method allows for the possibility of burning excess hydrogen as a fuel source while the regenerative cycle reduces the weight and storage space required.

“Additionally, liquid helium was briefly considered due to its safety benefits, but its manufacturing cost is significantly higher than that of liquid hydrogen, ranging from $3-10 [per liter] in comparison to LH2’s $0.40/L.”

The independent hub motors drive the six fans as needed for each flight phase, with fuel economy a major concern.  The University’s design team calculated a miserly fuel burn of 0.011 gallon per available seat mile, significantly better than an Embraer ERJ-145’s 0.025 per seat mile.

Arizona State University’s  Polytechnic multidisciplinary approach brought about an aircraft based on the Embraer ERJ-145 but powered by two different advanced power systems.

Their high temperature superconductivity (HTS) initial effort would be based on near-term technology, with two subsystems, the first having two 3,000 horsepower turbine generators that provide constant power to electric ducted fans.

The generators and a second pair of small turbines can be “nestled” in the fuselage, cooled with nitrogen, and provide power to the ducted fans as needed – both pairs generating power for takeoff and climb with the smaller pair used only for cruise and during descents.  Although the design team does not anticipate great fuel savings, the quietness of the systems should make the airplane a good airport neighbor.

An even more exotic solution – magnetohydrodynamic (MHD) propulsion – is a longer-term but much anticipated way of moving airplanes.  This would allow elimination of the turbines, replaced with a cooler-operating, quieter system, but again one which initially would offer little in the way of fuel savings.  The team developed a new type of ducted fan to take advantage of the technology.   Theoretically, the potential is there for improvement.

All of the collegiate groups deserve congratulations for exploring the possibilities of future commuter flight.