On Monday, while waiting for Bertrand Piccard to land Solar Impulse 2 in Chongqing, China, Andre’ Borschberg tweeted, “Congratulations to Yael Maguire’s team on their first test flight with #Aquila, taking Mark’s vision to a new level.” “Mark” refers to Mark Zuckerberg, Founder and CEO of Facebook, and Aquila refers to a 737-size, solar-powered drone that will be capable of months-long flights, bringing Internet access to billions who lack connectivity today. 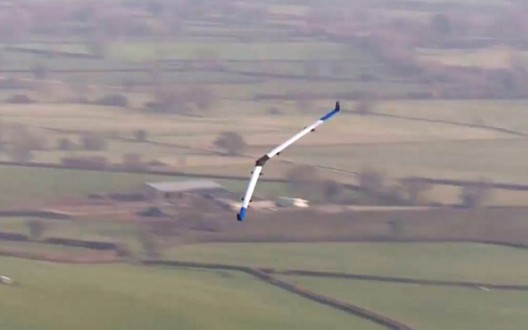 Test flights of Aquila are currently being held in England, although it’s hard to tell if this is a full-size prototype

According to the Christian Science Monitor, “At this week’s F8 developers conference, Facebook has highlighted exactly how far the company is looking to expand beyond its social-network roots. “On Thursday, the tech giant announced that it had completed the first test flights for its unmanned aerial vehicles (UAV), or drones, in the United Kingdom.” The New York Times reports that the Aquila weighs as much as a small car and has a wingspan of 95 feet, slightly larger than a Boeing 737.  Developers say it can maintain flight at 60,000 to 90,000 feet for three months at a time, beaming Internet connections via laser beams.

Juliette Garside, reporting last year on the Guardian web site, said “Facebook has bought a Somerset-based designer of solar-powered drones for $20m (£12m) as it goes head-to-head with Google in a high-altitude race to connect the world’s most remote locations to the internet. “Mark Zuckerberg, Facebook’s chief executive, has unveiled plans (Editor’s Note: Where else, but on his Facebook page?) to beam broadband connections from the skies, using satellites, lasers and unmanned high-altitude aircraft designed by the 51-year old British engineer Andrew Cox. “His Ascenta consultancy will become part of Facebook’s Internet.org not-for-profit venture, joining a team of scientists and engineers who formerly worked at Nasa and the US National Optical Astronomy Observatory.”

In a strange kind of competition with Google, which has been promoting its high-altitude Internet program, Project Loon, the two web giants use two very different technologies.  Google proposes using a network of stratospheric balloons to provide “an uninterrupted Internet signal around the 40th parallel of the Earth’s southern hemisphere,” according to the Guardian. Financial incentives abound to there “first with the most.”  Facebook serves 1.3 million existing Internet users.   Four million are not currently on the net, a sizable new client base that could potentially triple revenues for either Facebook or Google.

Yael Maguire, an Internet.org engineer and engineering director at Facebook, explains: “In suburban environments we are looking at a new type of plane (he prefers that phrase to “drone”) architecture that flies at 20,000 meters (65,800 feet), at the point where the winds are the lowest. It’s above commercial airlines, it’s even above the weather. They circle around and broadcast internet down but significantly closer than a satellite.” Invisible infrared laser beams, which can carry large amounts of information at high speeds across space using free-space optical communication technology (FSO), will connect the satellites to each other and to receivers on the surface of the Earth. A possible explanation for Google’s south-of-the equator strategy is that only 16-percent of Africa’s population used the internet last year, compared with 75-percent of Europeans.

Balloons and slow airplanes will also present a challenge for ground controllers, both in Google centers and national air control systems.  Either’s ascent or descent through other traffic will have to be monitored carefully, with pre-determined protocols probably necessary to prevent conflicts.  Existing FAA rules in this country require airplanes, because of their greater maneuverability, to give the right-of-way to balloons, and maintaining separation between slow-moving aerial vehicles at high altitude will certainly add a new level of need for some form of sequencing and separation.

The Internet giants at the core of these new technologies are stretching the limits of communication and our ability to make the World Wide Web a truly world-wide part of everyone’s life.