Facebook founder Mark Zuckerberg is intent on providing at least basic Internet services to everyone in the world, even if means creating his own air force to accomplish that lofty goal.

March 27, 2014, he shared his overall plan, including a large fleet of airplanes that would loiter in the stratosphere, beaming high-speed Internet connections to one and all.

Just a few days ago, Zuckerberg announced the completion of the first full-scale aircraft for this grand plan, the Aquila.  Aquila has the wingspan of a Boeing 737, but weighs in at around 400 kilograms (880 pounds).  Apparently built in England by his recently acquired team of aeronautical experts, Aquila will be able to stay in the air for months at a time, its solar-cell-clad wing powering its four motors – looking very interesting on the noses of their probable battery pods.  Like the Solar Impulse and Eric Raymond’s Sunseekers and Duo, solar energy collected beyond that needed to propel the airplane during the day will be stored in battery packs – most probably located in the motor pods.

The airplane comes from a small group of engineers, at least two of whom came from a Somerset, England-based company, Ascenta.  According the Financial Times, company records show that Ascenta was a five-person team including chief engineer Andrew Cox and his wife Helen.  Both were directors of the firm.

Cox had been involved with the QinetiQ’s Zephyr drone program, which eventually resulted in an airplane that flew more than 330 hours, just short of a fortnight, and more than double the previous drone endurance record.  He also worked on the SpaceX Dragon, the first private aircraft to travel to the International Space Station.

Until November 2013 Ascenta was called High Altitude Engineering.  Cox, at that time was a board member of, and did engineering work for, Black Sky Technologies, which according to the Financial Times, built prototype rockets and capsules for commercial space travel.  He is still on the board of Flying Pictures, a UK-based company which has worked on 14 James Bond films, all the Harry Potter movies and the opening ceremony of the London 2012 Olympic Games for the BBC.

Since all that earlier excitement, Qinetiq has sold its Zephyr program to Astrium, a division of EADS, or Airbus.   Mr. and Mrs. Cox and their small team were picked up by Facebook, and moved from Somerset to London’s West End.

The FT report concludes, “From there, working with former NASA scientists at Facebook’s headquarters, they will plot how to fill the skies with drones and satellites that can deliver the internet to the unconnected two-thirds of the world’s population.”

Filling the skies will mean small swarms of Aquilas circling quietly at 60,000 to 90,000 feet, beaming signals down via laser beams.  The first example, even though built in England, will be test flown in the United States later this year. 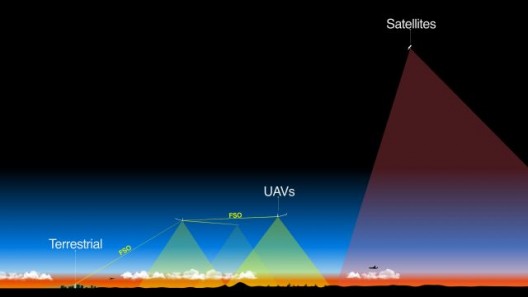 Facebook’s Vice President of Global Engineering and Infrastructure, Jay Parikh, reports, “Our laser communications team in Woodland Hills, California, has achieved a significant performance breakthrough. They’ve designed and lab-tested a laser that can deliver data at 10s of [Gigabytes] per second – approximately 10x faster than the previous state-of-the-art in the industry – to a target the size of a dime from more than 10 miles away. We are now starting to test these lasers in real-world conditions. When finished, our laser communications system can be used to connect our aircraft with each other and with the ground, making it possible to create a stratospheric network that can extend to even the remotest regions of the world.”

The combined technologies of high altitude long endurance (HALE) aircraft and ultra-fast laser transmission of data will help Facebook get through to that “10% of the world’s population [that] lives in areas without existing internet infrastructure. To affordably connect everyone, we need to build completely new technologies.”

Peter Diamandis, Chairmen of the X-Prize organization and co-author of Abundance, The Future is Better Than You Think, pointed out the explosion of entrepreneurial enterprise in Africa when cheap cell phones became widely distributed.  Facebook seems to be betting on an even greater effect when smart phones all over previously unserved parts of all continents have at least 3G connectivity.

We just want to know where we can get one of those motors on the Aquila.