United Airlines has united with two partners, AltAir Fuels and Fulcrum BioEnergy, to fly on sustainable alternative fuels.  Think of each flight being cleaner, using what formerly were unusable, land-fill-bound waste products, and certain to make United more sustainable, and flights less costly. 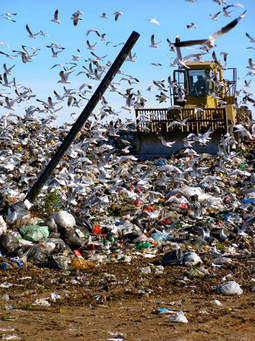 Biofuel from municipal waste seems like a good plan. This site’s in Argentina, showing the universality of the resource

Earlier efforts at producing biofuels relied on converting food, such as corn, into fuel, an uneconomical process that raised food prices and often used more energy than it produced in ethanol, for instance.  This was not sustainable and didn’t allow economic benefits for its users, so fell into disrepute quickly.

Organizations like the United Nations spoke out against taking grains from the poorest among us to make fuels for jetsetters.  In their 2009 report, UNEP, the United Nations Environment Program, calculated that up to 34 percent of arable land would be required to produce the fuel necessary to maintain current     Powerful firms sometimes take farms from poor communities in third-world countries to produce biofuels, adding human misery to a negative list.

Luckily, our existing food production and waste systems can provide a great deal of the raw materials necessary to produce jet fuel, and probably diesel oil and ethanol, that we will need to transport our mobile population.  United will mix non-edible oils and agricultural waste with conventional jet fuel for its flights: the FAA does not allow 100-percent biofuels for flight, yet.

“We believe that one of our greatest opportunities to reduce the aviation industry’s environmental footprint is through sustainable alternative fuels,” says Angela Foster-Rice, United’s managing director for environmental affairs and sustainability. 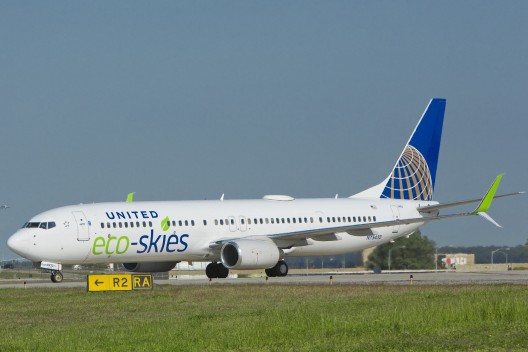 Like other airlines, United has been dabbling in biofuels for some time, making the first such test flight in 2009, using an algae-derived blend, and the first commercial flight in 2011.  Even though United signed an agreement with AltAir six years ago, it’s just now starting to receive deliveries at a commercial level.  Foster-Rice says that pricing of alternative fuel feedstocks and raising necessary capital investments slowed the process.  United plans to buy 15 million gallons of AltAir fuel over the next three years.

Not limiting itself to a single supplier, United has invested$30 million in Fulcrum BioEnergy, a startup that turns household trash into jet fuel. According to trust.org, “Fulcrum’s first refinery will be finished in Nevada in 2016, down the street from Tesla’s massive new battery factory. It plans to quickly build five more.”   United hopes to obtain up to 180 million gallons of biofuel from Fulcrum each year from the combined six plants.

Municipal waste is a great source, being universal and already collected on a regular basis.  Getting waste out of landfills accounts for part of the appeal of this fuel, with reduced methane emissions accounting for a sharp reduction in greenhouse gases. 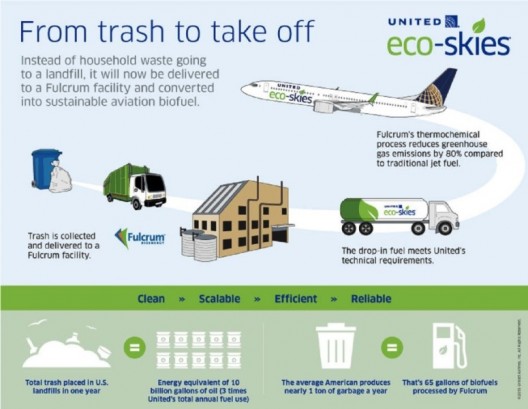 United flights this fall between LAX and SFO will lower each passenger’s carbon footprint from substituting a cleaner fuel, without each person realizing he or she is helping meet climate goals.  Each gallon of alternative fuel burned reduces the number of pounds of waste rotting and giving off pollutants.

For those who don’t hug trees, the monetary advantages are compelling.  Thepointsguy.com explains, fuel is the most expensive operating expense of major carriers.  Others, both to meet environmental objectives and remain profitable, are turning to biofuels.

United spent $11.6 billion on 3.9 billion gallons of fuel last year, about $2.99 a gallon and 32 percent of their operating expenses.  Fulcrum claims to be able to drop that to about $1.00, a saving even with a 30/70 blend of their brew with conventional jet fuel.

Hong-Kong-based Cathay Pacific has an equity stake in Fulcrum BioEnergy, hoping to become carbon-neutral by 2020.  Alaska and Southwest have signed agreements for biofuels, the latter for clean fuel made from wood residue.

A British company, Solena, is supplying a similar product to British Airways, showing the universality of the supply and the output.  Solena explains, in simple terms, the gasification and Fischer-Tropsch processes found in all these company’s approaches.  They share the following about “FT.”

“’FT’ is a chemical conversion process invented in the 1920s to covert synthesis gas into liquid fuels.  The industry today is dominated by large scale systems that convert natural gas and coal into FT fuels such as jet kerosene (FT-SPK) and diesel.  Importantly, FT derived fuels have been industry certified for decades and are in wide use by airlines and operators around the world.  As such, there is a high level of comfort within airlines and others to utilize FT fuels.”

Because these fuels help rid us of waste that would otherwise go into landfills, or add to methane output to the atmosphere, they allow guilt-free travel.  Because their products are all “drop-in” substitutes for existing fossil fuels, they don’t require massive infrastructure developments.  Because they are all produced from waste that is locally available, they reduce the need for pipelines and transport trucks.

Further development and expansion can be a great benefit for the airline industry and the world.