“Inspired by nature’s own anti-turbulence devices – feathers,” researchers at RMIT University in Melbourne, Australia, have developed a system that emulates the movements of feathers with which birds control their flight path in the most turbulent conditions.

Dr. Case van Dam gave a talk at the 2014 Electric Aircraft Symposium on controlling aircraft in turbulence and providing smoother rides with Gurney flaps, jet flaps and micro tabs.  The RMIT team chose to mimic the motions of feathers on a bird’s wing to gain many of the same advantages.  The Unmanned Systems Research Team learned enough to file a provisional patent on the system, detecting disturbances in the air ahead of the airplane.  Both approaches might help the electric commuter aircraft proposed by Dr. Brien Seeley and Dr. Mark Moore as part of the hoped-for “pocket airpark” system.

Research supervisor Professor Simon Watkins explained the benefits of the University’s wind tunnel testing on a model of a small aircraft.   “By sensing gusts and disturbances in air flow through their feathers, birds are able to fly gracefully rather than bouncing around in turbulent air.  The system we have developed replicates this natural technology, with the aim of enabling planes to fly smoothly through even severe turbulence – just like birds.”

As with Dr. Van Dam’s systems,  “Professor Watkins said the system had great potential for all sizes of aircraft and could not only reduce the effects of turbulence on passengers but also reduce loads on plane wings, leading to lower fatigue and hence longer life.”

“’While we need to explore new sensor arrangements to apply this technology to larger and faster aircraft, we have proven the idea on the most challenging problem of keeping small, lightweight planes steady – since these are the ones that get bounced around the most,’ he said.” 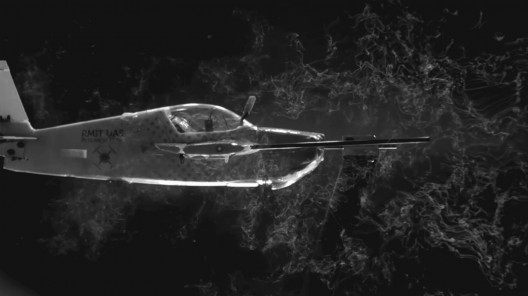 RMIT reports that the patent submission for a turbulence mitigation system for aircraft represents the successful outcome of PhD research by Abdulghani Mohamed, supervised by Professor Watkins and Dr. Reece Clothier in RMIT’s School of Aerospace, Mechanical and Manufacturing Engineering.  Mr. Mohamed’s contributions on turbulence theory and its effects on aircraft are acknowledged.

Earlier attempts to duplicate birds’ feathers reacting to turbulence or to provide flight control indicated some effects of the feathers on top of a bird’s wing enhancing control.  German experimenters attempted to duplicate this effect by applying a leather strip to one wing of a Messerschmidt Me-109 in 1938.  Later experiments titled “Separation Control on a Glider Wing with Artificial Bird’s Feathers” involved a section of a Stemme S10 that attempted to duplicate flight at low Reynolds numbers.

RMIT University (Royal Melbourne Institute of Technology) identifies itself as a global university, with campuses in Melbourne, Australia, two campuses in Vietnam, and an office in Barcelona, Spain.  The University also offers programs through partners in Singapore, Hong Kong, mainland China, Indonesia, Sri Lanka, Spain and Germany, and enjoys research and industry partnerships on every continent.