Meltdown – not a term one wants to hear when confronting an obstinate boss or while levitating in his or her new Tom Swift Electric Octo-copter.  But it is a real specter confronting electric vehicle users, and one amplified to positive levels of terror in flight.

Two groups of researchers have come up with novel ways of quelling that terror and getting rid of the normally flammable electrolyte that helps make lithium battery fires truly memorable. 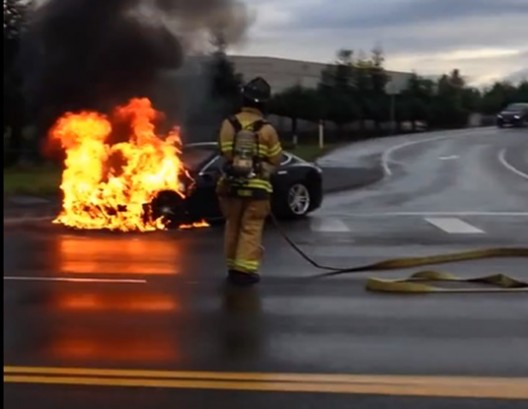 If researchers at Chapel Hill and Washington State University are successful in their research, that acid electrolyte can be replaced with something safer and as a bonus in both cases, batteries using these new substances will perform better and longer.

Researchers at the University of North Carolina at Chapel Hill, led by chemist Joseph DeSimone, Chancellor’s Eminent Professor of Chemistry in UNC’s College of Arts and Sciences and the William R. Kenan Jr. Distinguished Professor of Chemical Engineering at N.C. State University and of Chemistry at UNC identified the problem and its replacement: “Researchers have been looking to replace this electrolyte for years, but nobody had ever thought to use this material called perfluoropolyether, or PFPE, as the main electrolyte material in lithium-ion batteries before.”

DeSimone had been researching PFPE for the Office of Naval Research as a substance to prevent marine life from sticking to the bottom of ships, but DeSimone realized it had a similar chemical structure to a polymeric electrolyte commonly studied for lithium-ion batteries. As UNC explains, “PFPE is nothing new; it’s a polymer that has long been used as a heavy-duty lubricant to keep gears in industrial machinery running smoothly.”

Dr. DeSimone’s research on PFPE as anti-fouling agent led to use in battery electrolytes. He’s also working on pancreatic cancer cures, nanotech particle fabrication, and other amazing and varied explorations

Electrolyte needs to be electrically active, because it’s the medium through which lithium ions shuttle on their way between anodes and cathodes as batteries charge and discharge.  Overcharging can heat this medium to a point of spontaneous combustion, according to Dominica Wong, a graduate student in DeSimone’s laboratory.  Wong doesn’t think this is much of a problem for batteries in mobile devices, since they are small and exchanged frequently.  But batteries in cars or planes can make newsworthy pictures and cause something other than range anxiety for operators.

Since the PFPE can mix well with lithium salts, it doesn’t hinder ion transport, a nice set of properties for an electrolyte in a lithium battery.  It also acts as a buffer in a sense if overheating does occur.  Rather than adding to the temperature rise in a thermal runaway, the electrolyte acts to cool things down and even shut down ion transport – a built-in safety valve – although not necessarily something which a pilot wants to experience mid-flight.

The UNC team had help from Lawrence Berkeley National Laboratory’s Nitash Balsara, a faculty senior scientist at Lawrence and professor of chemical and biomolecular engineering at the University of California, Berkeley.  He and his team studied lithium-ion transport within the electrolyte and found electrode materials that would work in this new internal environment.  The two grows will “focus on optimizing electrolyte conductivity and improving battery cycling characteristics, which are necessary before the new material can be scaled up for use in commercial batteries,” according to Wong.  Their findings may be adaptable to cold environments, a necessary capability in aerospace and deep sea naval operations.

Wired is even more enthusiastic about the possibilities here.

The publication reports, “DeSimone and his team have been working with PFPE for years, and during their research, the crew found that another polymer electrolyte, polyethylen glycol or PEG, and PFPE could combine to dissolve salt, and potentially function as an electrolyte. When his team attached the PFPE to dimethyl carbonate, an electrolyte traditionally used in batteries, the resulting PFPE-DMC was a polymer that could move a battery’s ions with insane levels of efficiency while remaining stable.

“How does that compare to batteries now? The battery in a Tesla or Prius, using a regular electrolyte, has a transference rate of around 0.2, which works, but is far from ideal. The PFPE electrolyte measured around 0.91, almost approaching “unity” — a transference of 100 percent.”   This should light up eyes in the EV world.

Their work has been published in the Feb. 10 issue of the Proceedings of the National Academy of Sciences.

While the UNC/Berkeley electrolyte will keep batteries cool and barnacle free, a different, chewing-gum-like material from Washington State University “could dramatically improve the safety of lithium ion batteries.”  Dr. Zhong, Westinghouse Distinguished Professor in the School of Mechanical and Materials Engineering, and her team are attempting to create intrinsic ways to keep batteries from igniting.  This is a different approach, like that of UNC’s, in seeking answers beyond temperature sensors and flame retardant additives, which usually come into play only when there is a problem.  As Dr. Zhong explains, these approaches “can’t solve the safety problem fundamentally,’’

Zhong and her team earlier developed a solid electrolyte based on soy plants, something found in abundance in Washington State’s rural environment, and the object of much research in WSU’s agricultural labs.  Her newest approach to internal safeguards on battery performance is a “gum-like lithium battery electrolyte, which works as well as liquid electrolytes at conducting electricity but which doesn’t create a fire hazard.”

The stickiness of the gummy electrolyte is a big selling point, allowing it to stay attached to anodes and cathodes, “like when you get chewing gum on your shoe,’’ as Zhong told her students.

Zhong’s graduate student, Yu “Will” Wang, kept this in mind when designing his electrolyte model and the result is  “twice as sticky as real gum and adheres very well to the other battery components.” 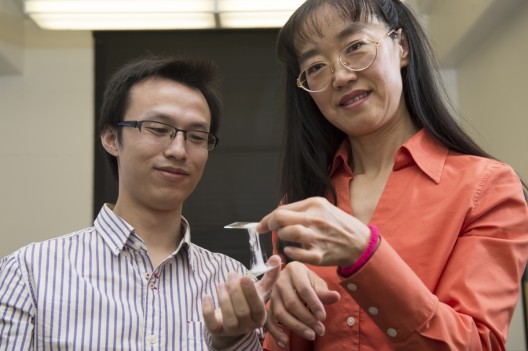 The resulting material is a hybrid of liquid and solid, and contains liquid electrolyte material “hanging on solid particles of wax or a similar material.”  Current flows easily through the liquid parts of the electrolyte, but the solid particles act as a protective mechanism.

Similar to UNC’s PFPE, “If the material gets too hot, the solid melts and easily stops the electric conduction, preventing any fire hazard.”  It can be easily incorporated in current battery designs, according to Zhong, and could be highly adaptable in “future flexible electronics.  You can stretch, smash, and twist it, and it continues to conduct electricity nearly as well as liquid electrolytes.” 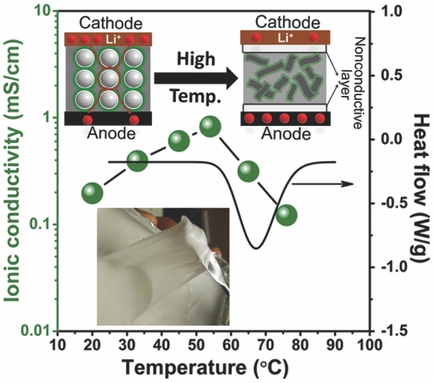 The researchers recently reported on their work in the journal, Advanced Energy Materials. They have also filed a patent, and hope to be incorporating their material into production batteries soon.