Dr. Yi Cui is a Stanford University associate professor of materials science and engineering and a member of the Stanford Institute for Materials and Energy Sciences, a joint institute with SLAC, the National Acceleration Laboratory.  He has spoken at three Electric Aircraft Symposiums, and has worked for at least the last decade on various technologies and tactics to bring battery science to a high level.

His latest effort involves “a low-cost, long-life battery that could enable solar and wind energy to become major suppliers to the electrical grid,” according to a press release from SLAC.  Dr. Cui says, “We believe our new battery may be the best yet designed to regulate the natural fluctuations of these alternative energies.”

Of concern to drivers of electric vehicles and future pilots, the electrical grid may have trouble keeping up with recharging needs of large numbers of cars, buses and even Boeing SUGAR (Subsonic Ultra Green Aircraft Research) Liners.  Wind and solar have the well-known deficits of shutting down after dark or during lulls in the breeze, respectively.  It would be nice to have energy storage capabilities to ride out these lax spells, much as the Solar Impulse flies through the night on its batteries.

Such storage would have to be inexpensive to compete with fossil-fuel powered generators and scalable to megawatt levels.

Flow batteries offer some of those characteristics, pumping two different liquids through a chamber where they interact – the most common outcome being a “redox”, or reduction-oxidation reaction where the two electrolytes with different valences press against two sides of a membrane separating them, react, and generate current.

The first such battery, created in 1884 by Captain Charles Renard, powered the Airship La France, and flew several trips around the Paris area.  The zinc/chlorine battery was “fueled” by its own on-board chlorine generator. 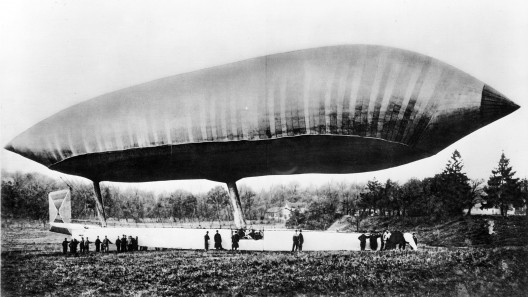 Modern versions of the flow battery, according to SLAC “pump two different liquids through an interaction chamber where dissolved molecules undergo chemical reactions that store or give up energy. The chamber contains a membrane that only allows ions not involved in reactions to pass between the liquids while keeping the active ions physically separated. This battery design has two major drawbacks: the high cost of liquids containing rare materials such as vanadium – especially in the huge quantities needed for grid storage – and the membrane, which is also very expensive and requires frequent maintenance.” 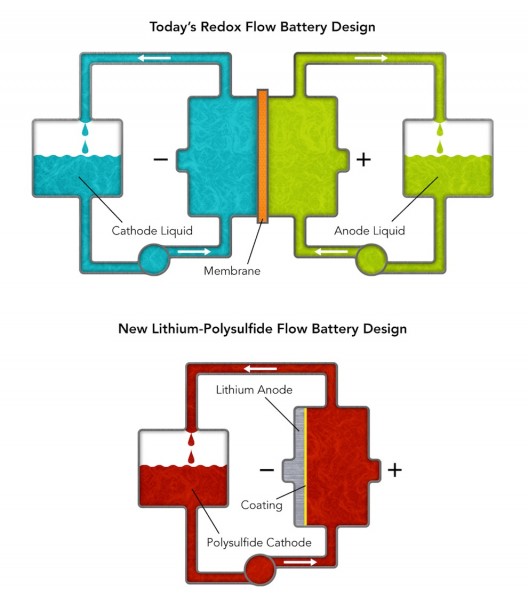 These diagrams compare Stanford/SLAC’s new lithium-polysulfide flow battery design with conventional “redox” flow batteries. The new flow battery uses only one tank and pump and uses a simple coating instead of an expensive membrane to separate the anode and cathode. (Illustration: Greg Stewart/SLAC)

Instead of pricey vanadium-laden liquids, the Stanford battery uses inexpensive lithium and sulfur, and does away with the costly high-maintenance membrane.  “In initial lab tests, the new battery also retained excellent energy-storage performance through more than 2,000 charges and discharges, equivalent to more than 5.5 years of daily cycles,” Cui said.  Flow cells can also have higher energy and power densities than conventional batteries.

Dr. Cui and his team published their findings in the May issue of Energy & Environmental Science.

Now, if only someone could make this type of flow battery mobile – at least small enough to power a car – or even an airplane. 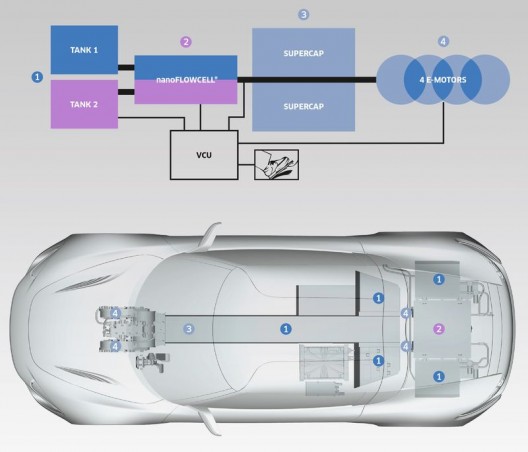 Perhaps that hope has come true.  nanoFLOWCELL, a Lichtenstein based company, displayed their QUANT e-Sportslimousine at this week’s Geneva Motor Show.

Its appearance is provocative, with the gull-wing doors luring one into the four-seat interior.  The specifications are even more noteworthy, though.

nanoFLOWCELL claims a range of 400 to 600 kilometers (249 to 373 miles) for the vehicle, which rolls on four wheels each powered by a 120 kilowatt (160 horsepower) continuous, 170 kW (228 hp) peak, motor.  Torque per wheel is an astonishing 2,900 N·m (2,139 lb-ft), with well-controlled all-wheel drive and “torque vectoring” enabling a 0-62 mph time of 2.8 seconds.  Supercapacitors store energy from regenerative braking and act as a general energy buffer for the car’s electrical system.

The Quant’s flow cell uses “two different electrolytic solutions… pumped through the appropriate battery cell in which an electrode (anode or cathode) is located. A membrane separates the two electrolyte chambers and their differing chemistries. At a nominal voltage of 600 Volts and 50 Amps nominal current, the system in the lab is achieving continuous output of 30 kW (40.2 horsepower).

nanoFLOWCELL claims its (unspecified) fluids have a “large increase in the number of charge carriers” and enable the flow battery to produce a specific energy about five times that of a lithium-ion battery, or 600 Watt-hours per kilogram compared to 120 Wh/kg.  Higher grades of lithium batteries claim 190-200 Wh/kg, making the comparison 3:1, but notable nonetheless.  They also claim 10,000 charging cycles with no noticeable memory effect and “almost no self-discharging.”

The QUANT carries two 200-liter (53 gallons US) tanks for a total energy capacity of 120 kWh.  Driving at the “lower load range” and not doing jack-rabbit starts, energy consumption is about 20 kWh per 100 kilometers (62 miles).  This would imply a driving endurance of six hours at unknown speeds.

These special liquids, once discharged, must be replaced, two different types in the two on-board tanks.  Refilling will be quick, although one would need to take care to put the right liquid in each tank.  Here, too, there would need to be a distribution network in place to allow drives to distant electrolyte pumps.  Increasing the tank volume of the QUANT e-Sportlimousine to 800 liters would be possible, according to the company.

In February, nanoFLOWCELL AG announced a partnership with Bosch Engineering GmbH to further develop vehicle electronics for the QUANT e-Sportlimousine.  This gives some credence to the company’s ambitions.

In the meantime, nanoFLOWCELL has produced a poetic, expensive promotional video to match their prototype vehicle.  Just remember that in place of “salt water” think “two very special types of salt water.”