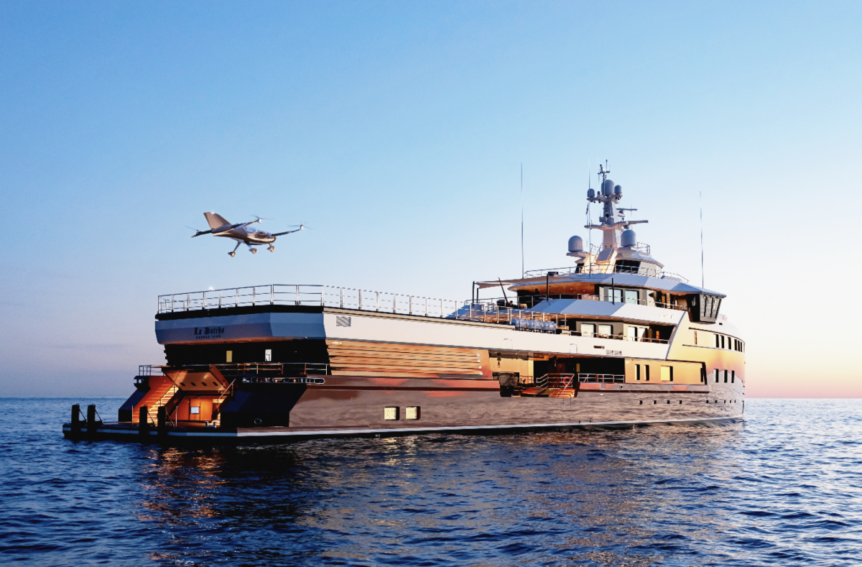 A flying machine in your two-car garage was the promise heralded by Popular Science and Popular Mechanics magazines during the 1950s and 1960.  It was the era of Bob Cummings piloting his Aerocar on his popular TV show, and KISN radio watching over traffic with one in Portland, Oregon.  Expectations were high and often disappointed.

High costs of establishing a network of two-ton, four-passenger eVTOL (electric Vertical Take Off and Landing) machines dissuaded even Uber from pursuing that goal.  Consider that skyports, vertiports, or whatever they ended up as are enormously expensive, and a network with charging stations and passenger accommodations would be a large investment.  Beyond that, each sky taxi would cost well into the high six figures, something that would require corporate ownership rather than the owner/driver model on which Uber’s land-based operations depend.

At least four eVTOLs are now on the market or headed there.  None cost more than a claimed $150,000 base price, a plausible outlay for those who can afford even a Light Sport Aircraft.  Whether the capabilities claimed for these machines can be met for those prices remains to be seen.  Here are the four.

Rise above it all in your Axe 2-seat personal vertical take-off and landing EV.

The Skyfly Axe is unique in having a fixed wing, with four propellers powered by eight Geiger 50 kilowatt (67 horsepower) motors at a fixed angle relative to the wings on which they are mounted.  According to Skyfly, this reduces complexity, brings down manufacturing costs, and increases reliability.  The fixed wing increases range, up 100 miles in all-electric mode.  With a “small, lightweight built-in rotary generator, the Axe can do 200 miles.  Simplicity allows CEO Michael Thompson to claim that users can learn to fly the Axe “in about an hour,” using controls similar to consumer drones.

For added safety, two motors drive each propeller, and can operate individually.  The fixed wing configuration gives the craft something many multi-rotor eVTOLs lack – a glide ratio.  If all else fails, a ballistic parachute will bring the craft and crew down slowly.

Simplicity of construction and operation make it possible for Axe to be certified under the UK’s Civil Aviation Authority (CAA) BCAR Section S, a faster, more economical path to certification than if Skyfly were seeking commercial operations.  That should enable customers who order the Axes now to be flying them within two years.

A buyer puts down a £1,000 plus Value-Added Tax or VAT deposit.  This reserves a build slot.  The buyer then signs a purchase order contract, gives another £15,000 plus VAT to secure the build slot, and receives his or her aircraft serial number.  So far, six Axes, 001 through 006, have been ordered, five in England and one in France.  The buyer will pay 65 percent of the total cost of the aircraft to start its manufacture, that money due six months before construction starts.  At this point the buyer specifies the desired options to determine the craft’s total cost.  The buyer must make a final payment of 25-percent total cost with options, then waits for delivery in 2024. 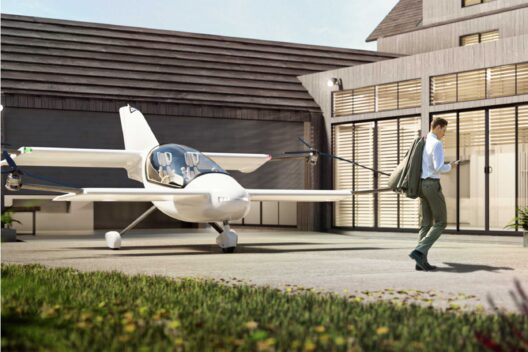 Skyfly Axe in driveway setting.  Prospective customers answer questions about their accommodations for the craft

The range extender adds nearly 100 pounds just for the engine, plus whatever fuel load necessary.  Would it be just as feasible to add 100 pounds of batteries for extra range without adding to emissions?

Thompson concludes, “The Axe gives customers the ultimate flexibility and opens a whole new market for new and existing pilots that would not have previously been available; With the Axe, you can fly from your garden to your friend’s house, avoiding traffic jams and cutting journey times to a quarter compared to using a car – as well as enjoying stunning views along the way.”

Made in Israel, Air One is a craft similar to the Axe, but with eight propellers instead of four, although both eVTOLs have eight motors.  In electric mode, if can carry 200 kilograms of passengers and luggage 110 miles at speeds up to 155 mph. One might need to “throttle” back to a more leisurely cruising speed, though, to achieve that range.  Running the total 771 horsepower would delete the batteries quickly, but they can be recharged from zero to 100-percent in an hour, and from 20- to 80-percent in 30 minutes.  Conventional wisdom says you shouldn’t go lower than 20 percent charge anyway.

Israel’s i24 News reports on this startup with some startling pronouncements from the company’s leadership.

CEO Rani Plaut noted an underlying insecurity that might lurk in some customer’s minds: “Aircraft [are] always dangerous… we are bringing the aircraft to the car level in terms of safety.”  To allay that insecurity, he explains the wonders of having total backup for everything on the aircraft.  “Very high redundancy – you can lose a motor, a wing, one of the main batteries… the aircraft will keep flying.”  One would hope a wing loss would only happen with the craft in hover mode.

TransportUp.com  reports, “AIR intends to implement many cutting-edge technologies and processes used in the automotive industry to quickly scale mass production of AIR ONE.”  Plaut expands on that idea.  “The future of mobility is in the sky, but to get there we need to build consumer confidence in eVTOLs as a legitimate mode of everyday transport and develop vehicles on a mass-scale to bring that vision to life.”

Automotive-type touches include “rudder pedals” (which seem to be only footrests) that act as steps for entry to the wide cabin and a mode selector for the type of flying desired – a bit like similar controls on electric cars.

To make it an even more carlike experience, “Fly by Intent” software manages complex functions and navigation.  An Artificial Intelligence (AI)-enabled monitoring system “performs frequent inspections of the vehicle and eliminates checklists for riders to ensure paramount safety, even for riders with minimal training.”  AIR ONE will require a license, “not much different than a basic sports pilot license, which is 15 to 30 hours of practice.”

AIR’s AI system “analyzes what you want… and translates it to the adaptive maneuvers of the aircraft,” according to Plaut.  It will be interesting to see how this particular human-machine interface works out, and what safety measures allow one to opt out if necessary.

Such assistance will be helpful, since AIR ONE incorporates retractable gear, a feature along with multiple powerplants that would make it a Complex Aircraft in normal certification and subject to far more training than 15 to 30 hours of practice.

Rudder pedals flip down to act as steps into the cabin, one of the ONE’s many unique features

AIR is working with the FAA to obtain G1 certification, a starting point to further certification and flight testing.  Archer and other eVTOL makers are also pursuing this.

Ordering is similar to that for an Axe, paying a $1,000 deposit, doing some paper work, and reserving a place for delivery of your AIR ONE in the fourth quarter of 2024.  No options are listed.

We have reported on Jetson One before, and will let Stephen Colbert make a sales pitch here.

Opener’s Blackfly had a brief display at Oshkosh last year, but not with the pizzazz shown in this video, which neatly compares it with the Jetson.  They’re both budget machines, relatively.  The big surprise here is the number of Blackfly wings and fuselages stacked up waiting for delivery.  With eight motors per airplane, we hope supply chain problems don’t affect any of these new machines.

With wildly different approaches and great cleverness, it could be a fascinating future for light aviation.  We just hope the prices don’t fluctuate too much.