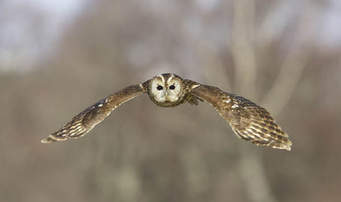 Not Just an Academic Exercise

Justin Jaworski, Lehigh University assistant professor in the Department of Mechanical Engineering and Mechanics, P.C. Rossin College of Engineering and Applied Science, writes, “From antiquity to Harry Potter, owls continue to captivate and mystify us. Perhaps owls’ most mysterious feat is their ability to fly silently, which enables them to both sneak up on prey and hunt on the wing using their ears alone. For over 80 years, silent owl flight has been linked to a set of unique plumage features, but only recently have the mechanisms to suppress the ‘swoosh’ noise from owl wings been addressed in earnest.” 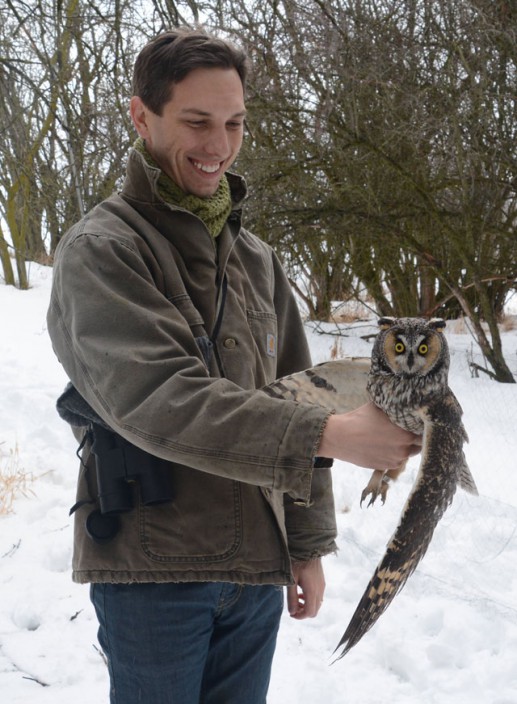 Justin Jaworski with one of his study subjects

This suppression of noise ensures that prey hunted by owls never know what hits them.  The doves that frequent your editor’s deck, for instance, have no such noise-limiting features, and make quite a racket when the door opens for their morning feeding.  Likewise, a pair of Mallard Ducks who’ve decided to blend in with the small songbirds are audible swooping in from over 50 feet away.

Jaworski has made detailed comparisons of the noise levels generated by different birds, and then gone to microscopic detail to analyze how owls achieve their stealthy flight.  Such findings may make neighborhood airports better neighbors, or reduce the number of noise claims by people living near wind turbines.  Researchers explain that finding might apply to reducing “noise created by air seeping through automobile door and window spaces.”

Jaworski notes that many species of owls suppress their noise at sound frequencies about 1.6 kilohertz (kHz) – above the range that can be heard by most humans.  Because of their great success in picking off small rodents and even rabbits, owls must be taking advantage of that quiet approach. 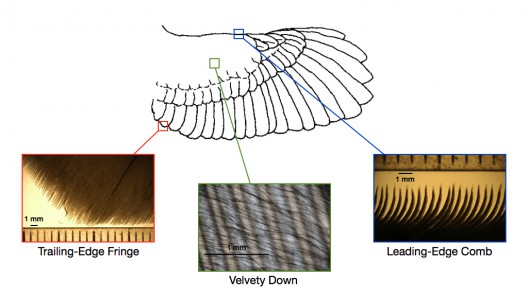 Three key elements of the owl’s quiet wing: a serrated leading edge, a downy canopy across the upper surface feathers, and a fringed trailing edge

The owl’s wing includes a serrated leading edge, a “canopy” of downy feathers that overlap and direct airflow across the wing’s chord, and a soft fringe along the trailing edge.  Recreating a “velvety” down canopy on a production aircraft wing could be a tough project, Jaworski and his fellow researchers came up with a 3D-printed trailing edge consisting of “finlets.”  After having tried a variety of open-mesh cloths – including wedding veils – the team found that the threads cross-wise to the airflow did not contribute materially to noise reduction.  They created a series of parallel fibers that direct the air across the wing and off the trailing edge and that emulate the sound-deadening effect of the owl’s wing.  The 3D-printed trailing edge can be fitted to existing wings – giving a 10dB reduction sound without harming overall performance.

These noise-reducing effects have been known since at least 1932 and documented in 1972 and 1974 papers.  Jaworski and fellow researchers from four universities contributed to two papers, “Bio-inspired trailing edge noise control” in the American Institute of Aeronautics and Astronautics Journal and “Bio-inspired canopies for the reduction of roughness noise” in the Journal of Sound and Vibration.  These efforts not only include more precise measurements than earlier efforts, but led to a practical product for real-world applications. 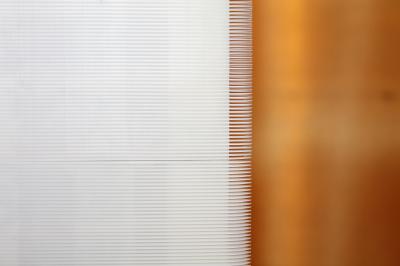 Streamwise-oriented ‘finlets’ are installed on a wing or blade trailing-edge to reduce trailing-edge noise by up to 10dB without substantial changes to the aerodynamic performance and over a range of angles of attack. Photo: Nathan Alexander

Siemens has a totally practical intent for their trailing edge treatment of wind turbine blades.  The company called their owl-like appendage “DinoTail,” soon to be in serial production according to the company.  Siemens credits the need for near-silent operation of wind turbines to make them acceptable for on-shore operation.  Improved aeroacoustic performance should allow wind turbines greater latitude in placement around otherwise off-limits population centers.  The technology can also allow pulling greater production without increasing noise. 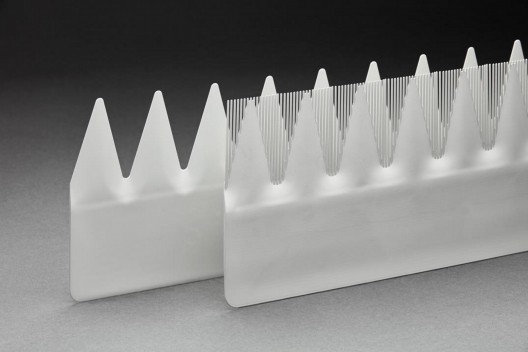 At the Wind Energy Hamburg 2016 trade show, Stefan Oerlemans, Key Expert in Aeroacoustics with Siemens Wind Power, explained, “This structure that was inspired by owl wings does not compromise the aerodynamic performance.”  Since the combed teeth are a second generation of the original DinoTail add-ons, they will replace the original items on onshore wind turbines, and on future new models.

A high level of biomimicry seems like a good way to advance aeronautics and efficient capture of wind energy.  The birds, especially wise old owls, have been doing it right all along.