With Tesla’s $5.5 billion “gigafactory” already producing cells for its line of cars and its “Powerwall” home energy storage systems, it now seems like a tenuous, toe-dipping approach with Volkswagen announcing its own battery plans.  VW may invest up to $15.5 billion according to Tech News, the outlet projecting the highest number.  Others with less money but promising technologies are also betting on better batteries.

With only 14 percent of its total area completed, the Tesla Gigafactory on Electric Avenue (what else?) near Sparks, Nevada, is already up and running, producing Tesla’s Powerwall and Powerpack battery systems.  According to Teslarati.com, “Elon Musk told investors at the 4th quarter earnings call earlier this month… those products are already profitable and are expected to become more so as volume increases.” 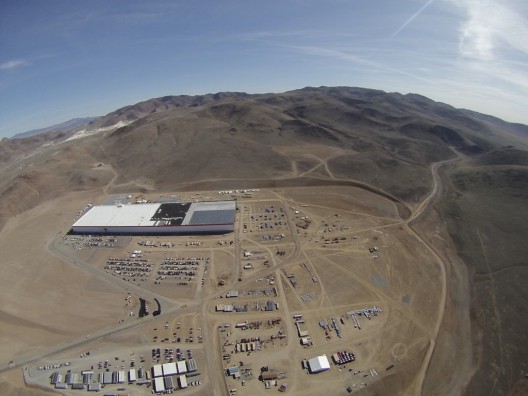 Aerial view shot from a 1946 Cessna 140 of the 14-percent complete Gigafactory as of February, 2016.  Photo: Joshua McDonald

Other projections anticipate that the Gigafactory will “be net zero and have no carbon emissions,” “net zero meaning that it will create more electricity than it uses over a 12-month period.

Productivity will be even more impressive, according to one analyst. “At the annual shareholder meeting on May 31, Tesla announced that its battery output potential could triple to nearly 105 gigawatt-hours of battery cells and gigawatt hours of battery packs for energy storage. Combined, that is nearly three times the total production of lithium ion batteries in the entire world. Musk also noted that the battery plant will also be updating the form factor of its existing cylindrical Li-ion cell that carries a 18 mm diameter and 65 mm height better known as an 18650 to a larger diameter and taller 20700 cell (20 mm diameter x 70 mm height).”

With lawsuits and investigations surrounding its “Dieselgate” problems, VW is taking a detour into the electric car world, even though it sold only 67,000 such vehicles, mostly hybrids, in 2015.

Tech Times reports, “VW chief executive Matthias Muller is working with his team on a new road map for increasing electric car and hybrid vehicle sales to 1 million per year by 2025 and for increasing the company’s investment in batteries. The non-executive supervisory board is believed to study the plans prior to a June 22 annual meeting.” 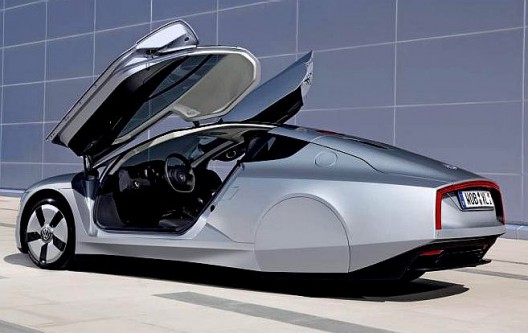 If only the batteries were as good as the concept cars. 2014 VW XL1 hybrid promised 107 mpg

As yet unsure if the manufacturing facilities will be located in Germany, Eastern Asia, or Europe, VW seems otherwise committee to spending up to $15.5 billion (the highest estimate so far) on the endeavor.

VW has explored roads into solid-state battery technology, former CEO Martin Winterkorn said last year that he was in discussions with Quantumscape, a reclusive bay area company that was working on batteries Winterkorn felt would be powering VW, possibly early in 2016.  What technologies Volkswagen ends up using are still in question.

Will Your Airplane’s Battery Pack Come from a Vacuum Cleaner? 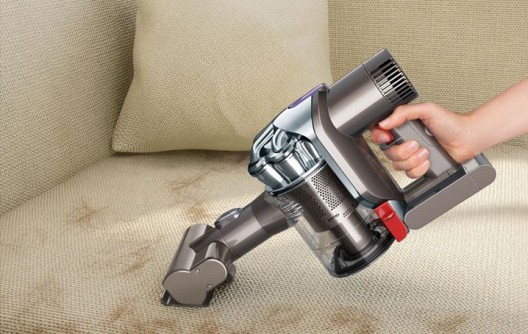 Dyson Digital Slim DC44 Animal vacuum with conventional batteries. How much lighter would this be with solid-state batteries?

Anne Marie Sastry, the founder of Sakti3, has been struggling to demonstrate the capacity and manufacturability of her batteries, meant to use thin-film processes similar to those used in integrated circuit manufacturing.  The positive aspects of the battery are its safety with no liquid electrolyte to leak and explode, and its potential doubling of efficiency over more conventional cells.

We will see whether store shelves are flooded with new vacuums encasing improved batteries before judging Dyson and Sastry’s success.

Or Will it Come from a Power Drill?

The size of the investment is unknown, and follows an investment from Intel last fall.

Prieto, Amy Prieto’s namesake and brainchild, is developing a drop-in anode replacement for lithium-ion batteries that features greater energy density and safety than conventional graphite anodes. Its greater claim to fame, though, is Prieto’s own 3D lithium-ion solid-state battery cell.  Stanley wants to bring Prieto’s technology to market through things like cordless drills and saws – but their use in larger electric vehicles is a big possibility.

The battery itself lends itself to manufacturing techniques adapted from computer chip creation.  This should make it possible to size operations to meet significant demand increases – when and if they occur.