First, recall the recent 24 Hours of Le Mans.  The first five finishers out of 56 starters in the race were hybrid vehicles.  Then think of the Pikes Peak International Hill Climb this year.  For the first time, an electric motorcycle outpaced all other bikes and one manufacturer, Zero Motorcycles, entered six bikes, three of which broke the existing record for electric motorcycles on the mountain. 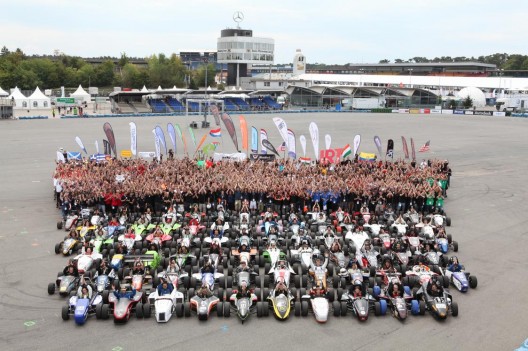 Formula Student teams and cars make for an impressive display

Now consider an event that is not as well known in the U. S., but which shows the direction that young engineers are taking in Europe.  Formula Student, a competition bringing together the work of 2,000 students from around the world, saw the first two places taken handily by electric vehicles for the first time ever.  Held this year at the UK’s Silverstone Raceway, the event drew an international crowd.

Switzerland’s ETH Zurich won first place with 921.3 points (of 1,000 possible), while German team UAS Zwickau took second with 851.5 points.   A “petrol-powered” car from the University of Stuttgart came in third with 814 points, showing a clear gap between electric and fossil-fuel entries. 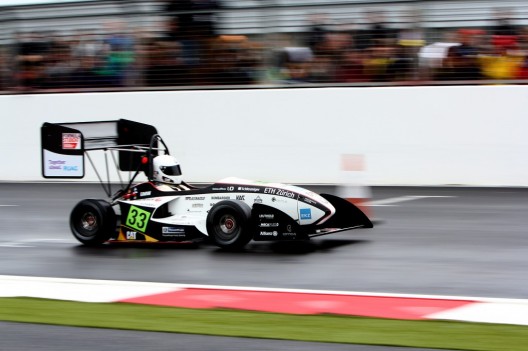 Sponsoring agency Institution of Mechanical Engineers’ (IMechE) claim that “It is believed to be the first time that an electric vehicle has beaten cars powered by combustion engines in any accredited motorsport competition,” may be mildly hyperbolic, but if they’re sticking to cars and purely electric propulsion, they may be entirely truthful.  And this certainly shows a direction that young engineers are following, one that could have massive implications for future transport.

The 160-year-old Institution is the oldest professional engineering entity in Great Britain with over 100,000 members.  The organization has been staging Formula Student for 15 years, with this year’s event possibly seen as a milestone.

Jon Hilton, Chairman of Formula Student, congratulated ETH Zurich, noting, “The electrically powered cars have made huge progress going from being unable to complete the 22 Km endurance event to winning overall in just five years. We are delighted by this progress but we will have to see what needs to be done in the future to ensure petrol cars remain competitive.

“The standard of vehicles on display, and the ingenuity of the students who create them, never fails to amaze me. This year’s competition showcased exactly why these men and women are among the world’s best young engineers, and all who took part should feel very proud of what they achieved.”

Formula Student cars have the look and feel of professional racing vehicles and show a level of sophistication in their engineering and design.  Though not much bigger than a competition go cart, the cars have high power-to-weight ratios, as in this description of the University of Bath’s entry.  “The car will weigh in at 155 kilograms (341 pounds) and is powered by a 58 bhp Aprillia V-twin motor, giving it a power to weight ratio of 374 bhp per tonne – about equivalent to a Ferrari 430 Scuderia.”

Despite that, Bath came in only 17th in the acceleration test, with the first three places in that event taken by electric vehicles, showing a massive shift in technologies.  The University of Stuttgart’s E car topped everyone with a 3.686 second run. 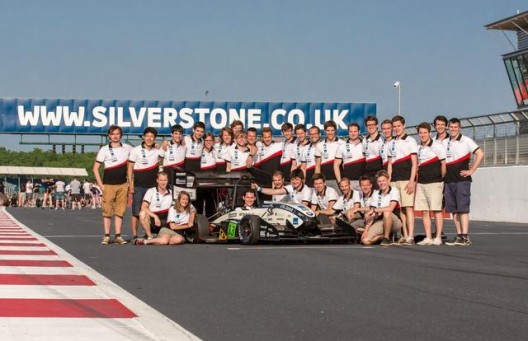 Officials gave point scores to each of several performance factors, including acceleration, skidpad, sprint, endurance, and fuel efficiency.   Endurance runs were only 22 kilometers (13.64 miles), something most electric entries could not finish five years ago.  As with Formula 1 racing, it’s possible to not win any individual event, but to have cumulative scores that allow a driver or team to achieve a championship.

Other scores for design, a business presentation, and a sustainability and cost study gave assurance that these future engineers would have technical and business skills.

Such contests bode well for future development of efficient, quick, good-handling cars.  With these designers getting into the aeronautical field, we may see some real breakthroughs with fresh vision.

Readers can download the Formula Student program here.  It details competition rules, every car entered with specifications, and highlights the scoring system.

ETH Zurich lists these specifications for their winning car: