The recent solar-powered race at Circuit of the Americas in Texas hosted 12 teams and an array of configurations and design approaches for an endurance contest that saw Oregon State University’s Phoenix circling the track 193 times for a victory.  Phoenix won a squeaker, followed closely by Illinois State with 192 laps and Iowa State with 191 laps.

Although not racing the fastest car, Oregon State’s team was most persistent, drivers sometimes putting in four hours at a stretch in the heat-soaked cockpit.  The fastest lap went to Iowa State’s Cory Anderson (4 minutes, 42.289 seconds), while OSU’s best was 5:26.565. 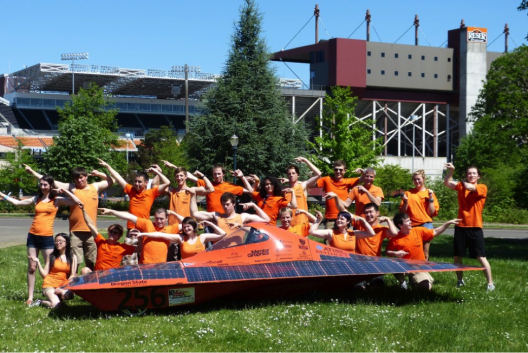 Phoenix ran its 661 miles over three days, the object being to travel as far as possible in that time on the virtually new Formula 1 track, used for the first time for a noisier Formula race late last year.  The Formula Sun Gran Prix took place on the Circuit of the America’s track near Austin, Texas. 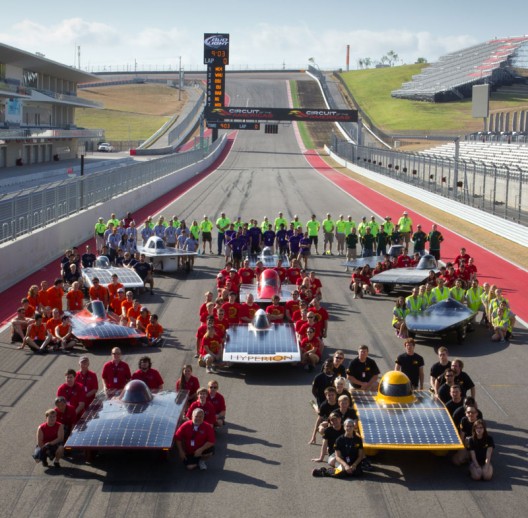 Solar racing teams on the Circuit of the Americas track near Austin, Texas

Oregon State’s Solar Vehicle Team gave to and benefited from the camaraderie of the event, reporting, “We couldn’t have done it without Missouri S&T and Northwestern University who lent us their motors and Principia who gave us tires.”  For their help in keeping other teams on the track, Oregon State won the Sportsmanship award.

Vehicles were all on the lightweight side, with Principia College’s RA7S the most ephemeral at 160 kilograms (352 pounds) and Missouri S&T’s Solar Miner VIII the heaviest at 320 kilograms (704 pounds).  Chassis were mostly aluminum or steel tube space frames, with Oregon’s entry made of titanium tubing.  Western Michigan University and Northwestern University both fielded carbon-fiber composite monocoque structures.

A 7.5 kilowatt (10 horsepower) NGM SCM150 motor powered nine of the 12 entries, including Oregon State’s winner.  Solar panels ranged from 730 to 1,346 Watts, with the Phoenix carrying 1,200 Watts of SunPower Mono-Si cells.  Probably as a means of reducing rolling resistance, all cars mounted three wheels

National Public Radio’s Morning Edition ran a story on the event, in which their reporter referenced the Solar Impulse flight across America, and recent around-the-world cruise of a solar-powered boat.

NPR interviewed Roger Duncan, a research associate at the University of Texas at Austin, who noted that currently solar vehicles are essentially single-person vehicles, but that in the not-too-distant future, solar power would be “ubiquitous.”

Oregon State in the meantime is developing its new, fourth solar-powered vehicle and plans to compete next summer in the 2014 American Solar Challenge, which will include both track race and road race portions.