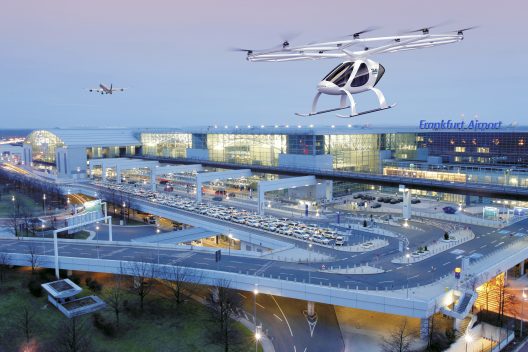 Frankfurt Airport, the hub of Fraport services, will include a Voloport to carry airline passengers to and from the airport

As most of us know from inconvenient experience, getting to and from the airport and fighting our way through the obstacles between us and our assigned seat are frustrating and at times almost demeaning.  Volocopter probably can’t take away the patdowns and the delay in security lines, but it can release us from the traffic jams on the way to and from the airport.

Volocopter proposes “Volocopter Ports,” a nest of landing platforms, battery swap stations, and boarding and departure zones.  Helena reports, “Fraport and Volocopter said that they’re exploring on how to integrate air taxis into the existing airport infrastructure at Frankfurt, using what it calls Volocopter Ports, that could link up with existing transportation nodes at the airport. One of Europe’s busiest air hubs, Frankfurt handled over 69 million passengers last year.”

Founded in 2012 and backed by Daimler (one of its investors), Volocopter is actively testing its 18-rotor “multicopter” in Dubai and flew Intel CEO Brian Krzanich as its first passenger at the 2018 Consumer Electronics Show in Las Vegas.  As if hoisting a CEO skyward is not enough, Volocopter flew a Crown Prince in 2017.  “The eye in the sky is well and alive in Dubai. Just yesterday, German company Volocopter, funded by automaker Daimler, successfully tested its flying taxi prototype by transporting Crown Prince Sheikh Hamdan bin Mohammed 200 meters into the air for five entire minutes.”

This somewhat daring approach to testing and marketing may be paying off, with a just slightly lower public interest in “flying cars” than in driverless cars, according to Allianze Global Assistance USA.  Despite the polls showing some reluctance to adopt the new technology, Helena Treeck told Yahoo Finance UK that her company believes flying taxis will be operating even sooner than that.

Backing those findings, “Flying taxis could be plying the urban skies in Germany within five years, according to a recent study by Horvath & Partners consultancy. It predicts that air taxis will be operating on fixed routes in big cities ‘as early as 2025.’ They add that their surveys show people have a higher acceptance of autonomous passenger drones than of self-driving cars.

Anke Giesen, Fraport executive board member for operations, chimes in.  “Autonomous flying will fundamentally change aviation in the years to come. We want to be the first airport in Europe to harness the potential of electric air taxis in partnership with pioneer Volocopter.”

The mutual press release explains that Frankfurt wants to pioneer in this enterprise.  ‘Fraport is a globally active airport manager with many years of expertise in airport operations – particularly in ground infrastructure, ground handling, and terminal and passenger services. Fraport can also leverage its extensive experience in unmanned flying. Via its FraDrones program, Fraport has already tested various scenarios for using drones for operational purposes. “ 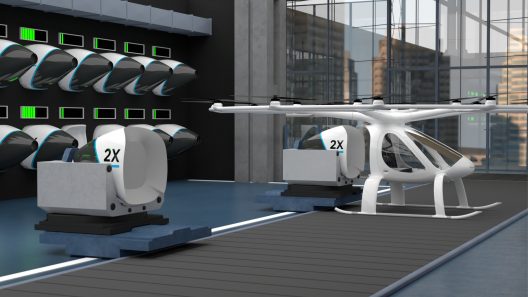 Florian Reuter, CEO of Volocopter GmbH, supports Fraport’s concept: “Providing the ideal connection between the city center and the airport poses a huge challenge for the world’s major cities. Together with Fraport AG, we are excited to pioneer the implementation of an air taxi service at one of Europe’s most important airports. We will be tapping into Fraport’s wealth of experience to integrate the Volocopter Service safely and efficiently into the complex array of processes required at a major international airport.”
Volocopter sees increasing demand for multicopter capacities and services.  “For the first time in our history, more people live in cities than in the countryside. At the same time, we all want to live ever more mobile. This trend will push previous mobility models to their limits – even autonomous automobiles will not be able to cope with the steadily growing demand for transport services. The mobility of the future must therefore break new ground. The Volocopter is one such way. Through its own hubs, it connects important junctions such as airports or business centers with the city center. The autonomous and starting at minute intervals Volocopter relieve so particularly infarct-vulnerable zones such as bridges, tunnels, ring highways or feeder roads and are much cheaper in operation than conventional mobility alternatives to the air.” 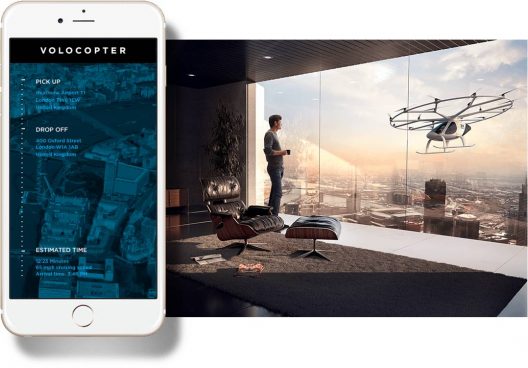 Volocopter touts “”Infrastructure on demand,” using its ability to overfly congestion, bridge outages and other traffic obstructions.  The company says, “No matter where you want to go, just call an air taxi. At downtown take-off points, you can board a minute-by-minute journey to the airport, major business centers or another Volocopter hub… “simply fly[ing] over autonomously and environmentally friendly, without any delays or detours.”

Whether these advantages can overcome the public’s reluctance (so far) to embrace those future benefits, we will have to practice patience, although the future may come to us sooner than we anticipate.