Fred To (pronounced Toe) lives in England and was one of a small group who built and flew the world’s first solar-powered airplane in December 1978. They flew just a few months before Larry Mauro lofted his solar-riser in April 1979. Both airplanes were limited by the technology of the day, lithium-ion batteries still over a decade away, and the best solar cells achieving less than five-percent efficiency. Fred wrote to tell your editor of the award. 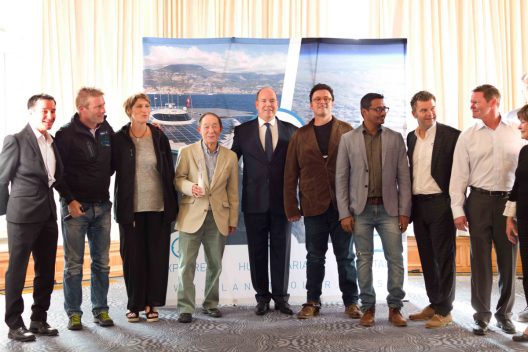 Fred To stands on stage with Prince Albert of Monaco, a patron to green aviation

“I was in Montreux Switzerland a few weeks ago, and on the 22nd of October I received an award from prince Albert II of Monaco for Solar One, which is now formally accepted as the first solar powered aircraft to fly. It was a great occasion and my family are so proud. All the great past pioneers were there and it was an honor to meet them; now I have new friends from all over the world. ”

The occasion, described on Raphael Domjan’s SolarStratos web site, commemorated pioneers in solar energy.  “HSH Prince Albert II of Monaco attended the grand opening of the ‘Pioneers and Adventurers of Solar Energy’ exhibition at the PlanetSolar Foundation hosted by the Fairmont Montreux Palace Hotel. Foundation director, Raphaelle Javet, our very own eco-explorer and Foundation president, Raphael Domjan, and a group of solar energy pioneers gave the Prince a preview of the exhibition.” 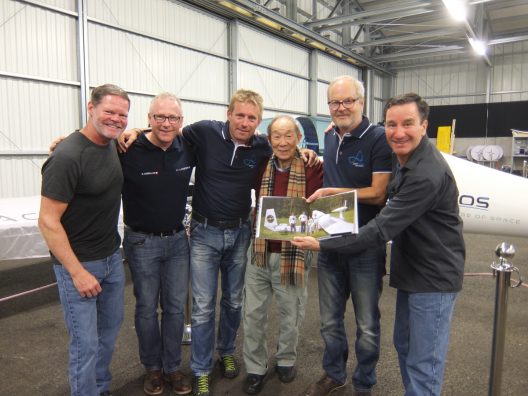 Fred wit some of his new friends in the SolarStratos hangar

Surrounded by his family and relishing his new friendships, Fred had what looks to be a great evening and some interesting trips to workshops of fellow innovators.  Inexplicably, Eric Raymond of Sunseeker fame does not seem to have been in attendance.

Self-effacing as always, Fred shared the glory of the moment. “I accepted this award on behalf of my late partner David Williams, also on behalf of Larry Mauro and all the other pioneers present there at the ceremony. I pointed out that not many of those present would have even heard of Larry Mauro. To the credit of the organizers, they also mentioned Larry in their book for that occasion. And to think that my ex-wife and David’s widow Anne both used to say that David and I were playing at building aeroplanes and not earning a living. I’m glad that I was also a film maker and so there is a video record of the project.” His half-hour film shows the efforts he and David Williams exerted to bring the project to fruition.

After this achievement, what was Fred to do? He followed up with dozens of other amazing flying machines, including an inflatable flying wing that featured the first fly-by-wire control system.

Popular Science, in its March, 1982 issue, noted the most impressive part of a most impressive project. “The most intriguing feature of the design is that flight control by the pedaler is not necessary. The 11 electric model airplane servos that operate the ailerons, elevator and rudders can be remotely-controlled with a transmitter by a ‘pilot’ on the ground.” 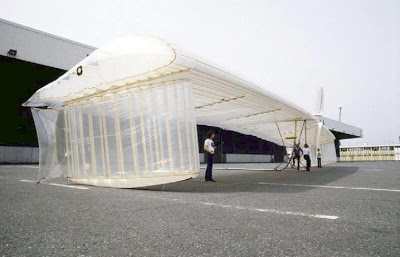 Fred had the first “fly-by-wire” aircraft in the world, brought about by the airplane’s extreme flexibility that obviated the use of conventional control cables. That extreme flexibility led to extreme crashworthiness, the aircraft (and pedaler) surviving several short plummets to earth with a flubber-like resilience.

These excursions into human-powered flight led to Fred’s long-term association with what became the British Human Powered Flying Club. His work with inflatable craft led to an association with Prospective Concepts, a Swiss firm that often astounds with its flying creations. He helped create a flying Stingray that swept its way through Czech and Swiss skies with over 300 flights from 1995 through 2000.

Commentary with the video explains, “Res Kammer worked side by side with Fred To to develop cutting patterns for all fabrics and the construction of this prototype for Prospective Concepts in Switzerland. The workshop was based at Burgdorf. Alan and Fred To shared the camera work. The pneumatic management was designed and produced by Hansueli Ammann. Thomas Rozhon, Jorg Kammer and Stepfan Zechner did all the cutting and gluing. The fabric was obtained from Greengate polymer in the UK.”

Prospective Concepts had some interesting prospects in mind for the Stingray, although they don’t seem to have yet been realized. A “new and improved version” is to have pneumatic controls, a cabin integrated into the weight-bearing geometry, electric ducted fan propulsion and “a multifunctional landing gear.”

Whatever comes of his enormously creative machines, Fred will continue with more surprises for all of us. These surprises will be quietly astonishing, joyful things, reminding us all of what dreams can become.

Fred sent an additional detail about his inflatable wing this morning.  “I am now trying to develop a smaller version of Phoenix, it will be machine made and will be 0.8 scale of the original, weight will go down a lot and I hope it could be sold cheaply. The owner will only need to order a replacement wing if it is damaged. I’m starting to get a small team together and find a backer.”

The original Phoenix was a hand-made effort, with Fred recruiting some talented seamstresses to sew a complex inflatable structure together.  Machine production could bring production costs down considerably.  Since the original could be rolled up and transported on Fred’s compact car, the 80-foot version should be even more portable.  At one point, Fred had considered putting an electric motor on Phoenix to assist the human power plant.