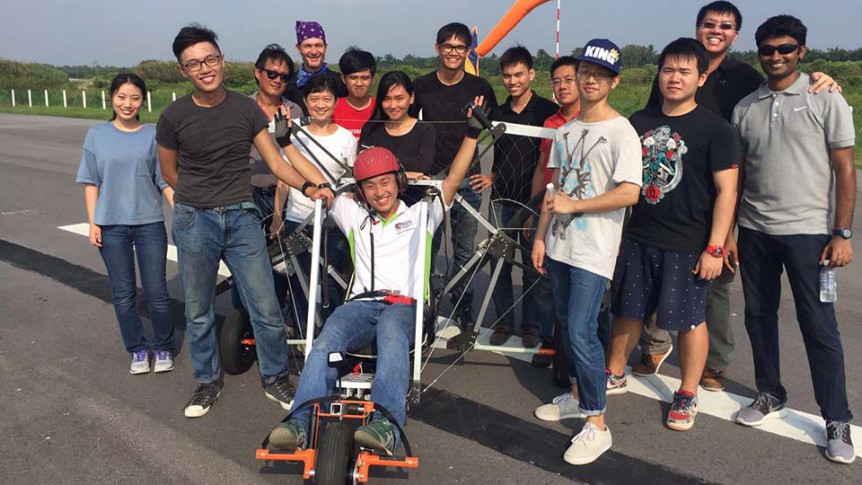 Students at the National University of Singapore (NUS) have a history of creating ultra-lightweight flying machines that are also green – floating around on electric power.  Their earlier effort, Snowstorm, a 24-rotor, single-person lifting device, so far has hovered only indoors. 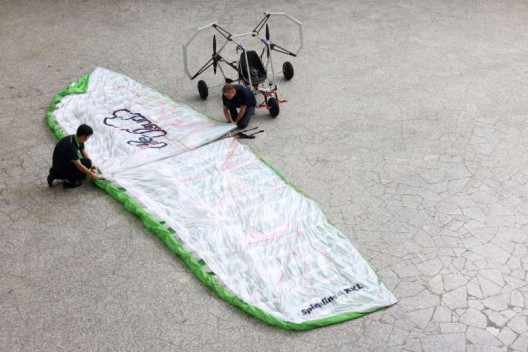 Eight engineering students, working within the school’s “Frogworks” program, have escaped into the great outdoors with their Delta, the world’s lightest electric paraglider – according to the school.

With two eight-kilowatt electric motors, four 14S lithium polymer battery packs, and tricycle landing gear, the Delta weighs in at 49 kilograms (107.8 pounds) empty weight.  Delta can carry a 75-kilogram (165 pound) pilot.  Cleverly constructed of carbon fiber and aluminum, the craft is claimed to be “the lightest aircraft in the world that can take off and land with wheels while carrying an adult pilot.” 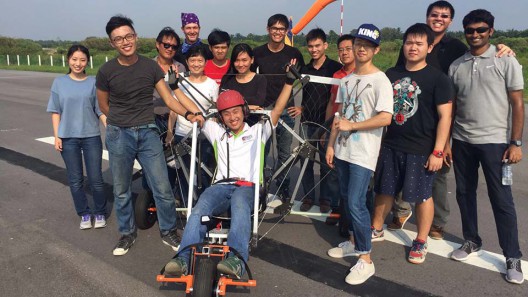 Fourth in a series of vehicles designed and built by NUS students in the Design-Centric Program (DCP) at the NUS Faculty of Engineering, the Delta was constructed for a National Geographic television program. “Machine Impossible” (viewable only in Asia, alas).  Test flown by pilot Narint Lohathong on March 19 at the Sungai Rambai Aerodome in Malacca, Malaysia, the airplane took off quickly but noisily (especially for an electric airplane).

Its 31-inch propellers might be replaced by longer blades turning slower, a good way to reduce prop noise.  That might take bigger, slower-turning motors, and then the age-old problem of greater weight comes to the fore.  Right now, the airplane can fly 36 kilometers per hour (22.3 mph) for about six kilometers (3.7 miles).  Not a terribly practical commuter, even, Delta is a three-month project meant to suit the needs of a TV show more than the needs of the flying public.

Mr Chan Wai Yang, a Year 3 engineering student at NUS, explains the greater significance of the machine.  “Designing and building The Delta was an experience like no other. We had a great learning experience as we went about tackling various aspects of the project, from constructing the physical frame to designing and implementing the aircraft’s electric energy system and pilot safety system. It was an engineering challenge we greatly relished,”

Safety systems include a roll cage to protect the pilot, fiberglass rods that act as shock absorbers for the main wheels, barrier nets between the pilot and propellers, and motor kill switches to shut things down quickly. 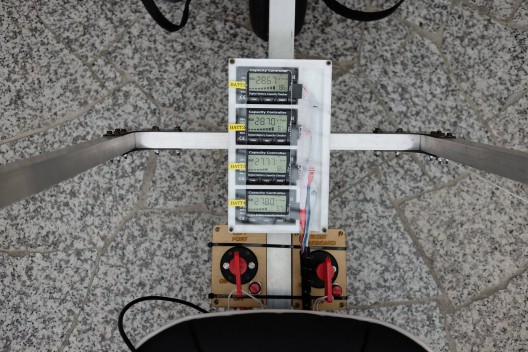 Associate Professor Martin Henz, project supervisor and advisor at the DCP seconded Yang’s endorsement of the project.  “We are thrilled to have this opportunity to build an all-new machine for the National Geographic Channel. Designing and building The Delta allowed us to push the limit of our creativity and engineering know-how,  while building upon our experience from previous successful FrogWorks projects. We will continue to fine-tune The Delta, and at the same time, we also look forward to creating more sustainable recreational vehicles, be it on land, at sea or in the air. Such projects have tremendous values in the education of our students in Engineering.”

On land, sea, and in the air, students at the National University of Singapore are exploring the limits of time and technology – and coming up with must-see TV at the same time.