Imagine a high-energy system that could be dropped in your car for $1,600, give it a 30-percent boost in mileage (and a simultaneous reduction in its carbon footprint), and added pep off the line.  Imagine that this was developed by two of the leaders in Formula 1 racecar development.  You might be interested.

Ricardo, a long-time developer of racing engine refinements, and Williams, oft-time winning chassis builder, are collaborating on just such a setup.

Kinetic Energy Recovery Systems (KERS), developed originally for the 2009 Formula 1 racing season, used flywheels, batteries, and stunningly powerful electric motors (60 kW – 81 horsepower from four to eight kilogram cylinders) to augment the internal-combustion engines motivating the racers.  The systems were controversial and eventually scrapped by all racers.  Teething problems in the first year of racing led to the barring of KERS in the 2010 season. 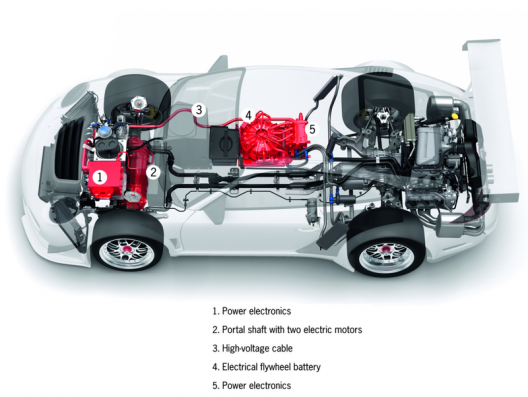 Applying these components to a roadable supercar, Porsche is introducing its GTR3 Hybrid at the upcoming Geneva Motor Show, and its technology looks a great deal like that from the 2009 F1 season.  A Williams flywheel takes energy from braking, and spins up to provide power to the two 60 horsepower motors that power the front wheels.  This, assisting the 480 horsepower internal combustion engine, should provide a level of acceleration that will shock even Porsche owners.  Expect this car to be a bit high end, since the “regular” GTR3 costs over $400,000, and has a waiting list if you’re anxious to join that club.

From that vaunted height, a more mundane prospect for retrofitting a milder form of the system to the family car may seem like a big step down, especially in price.  But Ricardo, Willliams, and several partners are working toward that goal.  There may even be an application possible in our aerial devices.

Ricardo group technology director Neville Jackson explains, “Kinergy offers the prospect of enabling effective hybridization extending into market sectors where the use of conventional electro-chemical battery systems technology would be prohibitively expensive.”  Might we see variants of these systems in scooters, motorcycles, and may we dream – airplanes?

(Editor’s note: Many thanks to David Bettencourt, an attorney in Hawaii, attendee at last year’s Electric Aircraft Symposium and we hope at EAS IV – for making me aware of the possibilities of hybrid electric aircraft and explaining their operation.)