Slovenian father-son team Luka and Matija Znidarsic developed a unique approach to keep a sailplane aloft once it’s launched through traditional aero-tow or winch methods.  Their outrunner  brushless motor produces 15 kilowatts (20 horsepower)at 100 Volts continuously, and can generate 25 kW (33 horsepower) for short bursts.  Weighing  6.5 kilograms (14.3 pounds) in a 180 millimeter (7 inches) diameter, 80 mm (3.15 inches) long package, the motor can be easily set into the modified nose of a conventional sailplane, with a one-meter diameter propeller folding neatly into the streamlines of the fuselage.  It has powered a LAK-17A 18-meter sailplane, showing a positive rate of climb when energized.  In a big sailplane like the LAK, the motor allows shortening expensive tows or extending flight when thermals become iffy.

Now, the Znidarsics have increased the capability to allow self launching with a sailplane, at least for smaller craft such as the Silent.  According to Luka, “We developed  a 3cm (a little over an inch) longer motor than is used on LAK.  So it is more powerful,” to allow “climbing on max power for [a] longer time.   The battery pack is slightly bigger too.”  The propeller is similar to that used on the LAK, but the curvature of the blade will be modified to make it more suitable to fuselage of the Silent.  It was installed in the “pure glider” version of the aircraft.

Luka says more testing will give exact data, but he believes that the package will provide up to 1,600 meters (5,120 feet) of altitude gain or approximately 120 kilometers (75 miles) of horizontal flight. 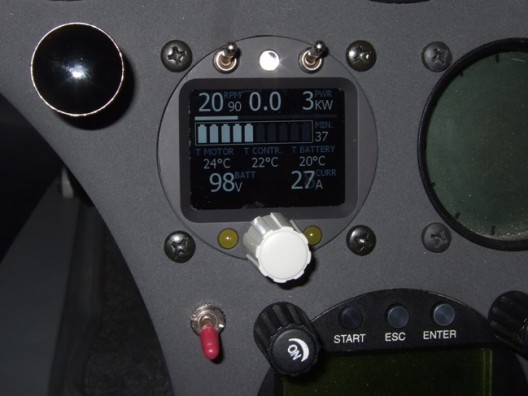 The neatly integrated instrumentation from FES

In a related development FES now  has an FCU that fills a standard 57 mm instrument panel opening.  According to FES, it is designed for simple operation.

“It indicates important parameters like, RPM, Power, Voltage, Current, Battery capacity, Remaining time and Temperatures. In case that one of the parameters is out of limit, an alarm is activated together with a sound signal.  [The] FCU also counts total engine running time, and some other parameters.”

“There is only one toggle switch to turn on instrument and a button with rotary encoder which acts as throttle selector and propeller brake. Press on rotary button, have some additional functions like alarm confirmation, etc.

“On the right side of cockpit or other suitable location is located [the] master switch under [a] red safety cover, which powers up the motor controller and main contactor which then connect the batteries to the controller.”