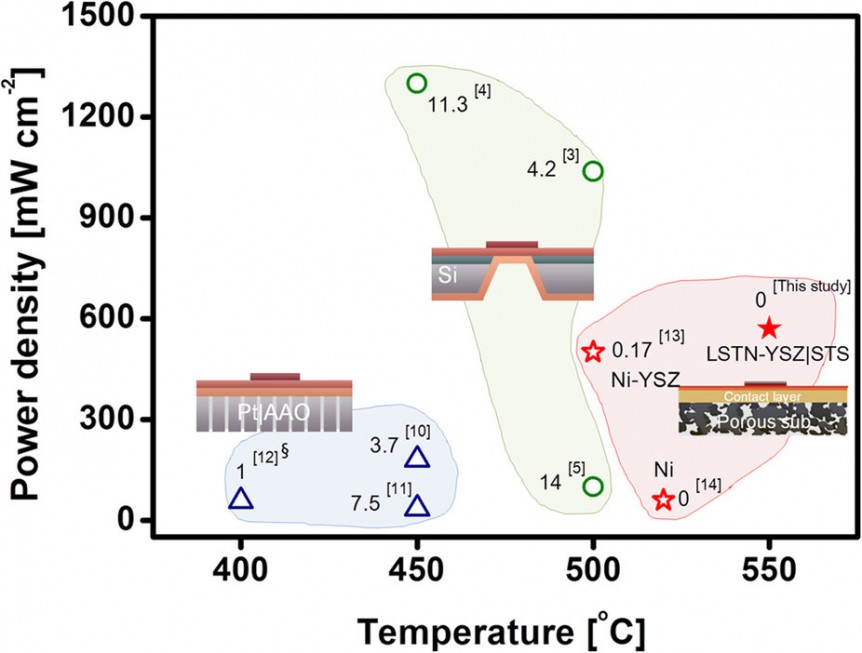 Several fuel cell developments show there are lots of options for burning hydrogen, if we can only make and distribute it in great enough quantities.  Most noteworthy, fuel cells could provide increased endurance and range compared to batteries.

Professor Gyeong Man Choi and his Ph.D. student Jun Joong Kim, working at the Pohang University of Science & Technology (POSTECH) in South Korea, have developed a miniaturized solid oxide fuel cell (SOFC) that can fly a drone for more than an hour.  On the consumer front, their fuel cell would allow cell phones to be charged just once a week. 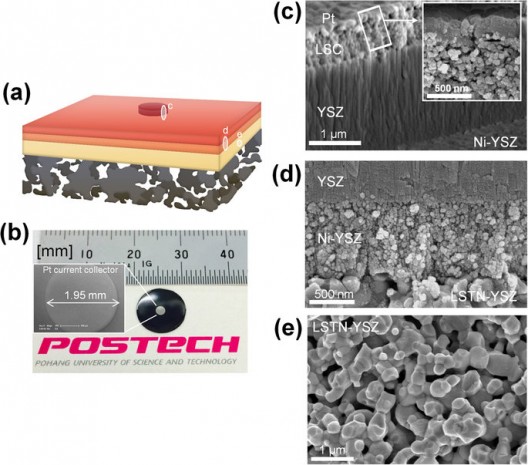 The professor and his students created the fuel cell to directly replace the batteries normally found in cell phones, laptop computers, and drones.  Their third generation SOFC “has been highly evaluated” because it is not restricted to smaller forms, but could be scaled to larger capacities “that can be used for a vehicle.”

The fuel cell has a simple structure and no problems with corrosion or loss of the electrolyte.  Silicon, often used as a supporting component of small oxide fuel cells, degrades quickly in use and like its behavior in batteries, sometimes has a thermal expansion mismatch with the electrolyte.  For that reason silicon can’t provide a rapid on/off response, something not necessary in a smart phone, but essential in aircraft power. 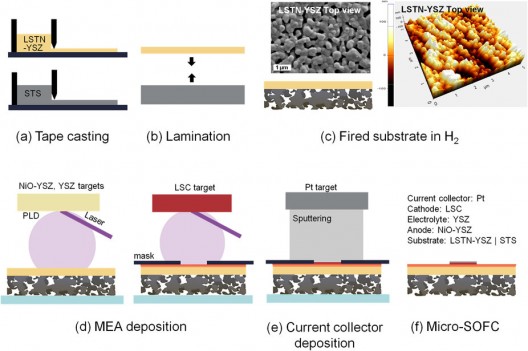 Layering and lamination process involved in putting active ingredients on a porous stainless steel substrate.  Process is similar to that used in integrated circuit manufacturing

Combining porous stainless steel with thin-film electrolyte and electrodes of “minimal heat capacity” apparently increases both performance and durability over silicon-based examples.  Made with tape casting, or spooling thin films onto a substrate; lamination and cofiring, the processes are adaptable to commercial production of large-scale SOFCs.  This seems very close to 3D printing with thin films, building layers and heating them to fuse them together. 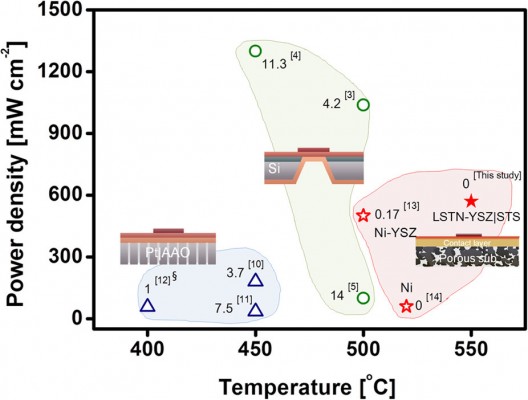 With a power density of ~ 560 mW cm-2 at 550° C (1,022, the fuel cell is comparable at this point in its development to silicon-based equivalents, based on your editor’s reading of the research team’s chart.  The team sees a market for portable electronic devices and drones, although the 550° C temperature must be well contained, just as internal combustion engines require good firewalls to protect the remainder of their structures.

Their results were published in the March edition of Scientific Reports, the sister journal of Nature.

This research was supported by the Basic Science Research Program through the National Research Foundation of Korea (NRF) funded by the Ministry of Education, Science and Technology.

We’ll have more articles shortly showing even greater endurance for rotary and fixed-wing drones, but with larger fuel cells.  Imagine a scaled, long-endurance fuel cell powering a people pod like the Ehang 184 or an ultralight airplane like the e-Gull.