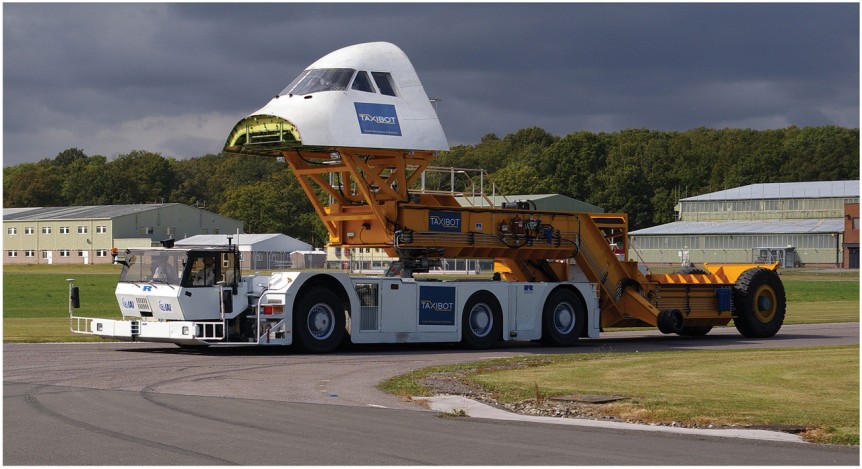 What seemed like an easy transition a few years ago has been delayed by one developer.  “Safran and Honeywell have delayed by two years the planned entry into service of their electric green taxiing system (EGTS), a device designed to enable an airplane to taxi with its engines shut down. 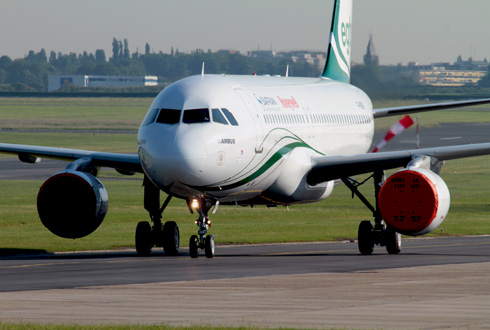 Taxiing with engines covered shows EGTS at work.  System would save up to 4 percent on fuel use

Aviation International News (AIN) quoted a spokesperson as saying, “The team is still working on the program with a goal of certification in 2018 and entry into service shortly after.”  The system uses motors on the main gear to enable taxiing under power.  One of several competing systems, WheelTug, has motors on the nose gear only.

Wheeltug uses a Boeing 737-800 as a testbed for the certification program. A  United States company with manufacturing apparently based in Gibraltar, WheelTug claims orders for 985 systems by 22 airlines. 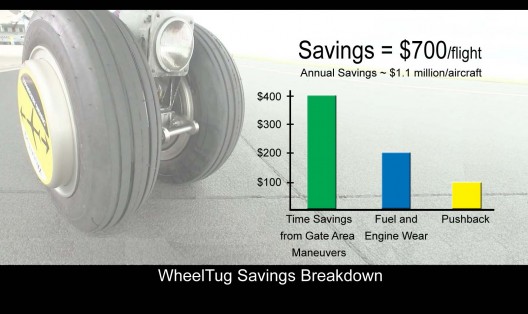 WheelTug’s projected savings per flight, typical for most such taxiing systems

Another system, TaxiBot, was developed by Israel Aerospace Industries in cooperation with France’s TLD, Germany’s LufthansaLEOS, the ground-handling component of the airline.  The main vehicle looks like a standard manned push-pull tug used to maneuver airplanes on the ground, but is “driven” by a connection with the pilot in the airplane’s cockpit.  This system is in commercial service with Lufthansa at Frankfurt Airport.  The partners hold a supplemental type certificate covering operations under FAR 25 rules on the Boeing 737. 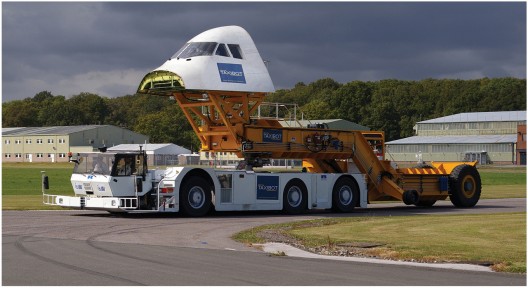 The only additional equipment of the airliner is the pilot’s control connection to the tractor.  This saves hundreds of pounds over the on-board powered wheels, controls and auxiliary power unit required to run the other systems, as much as the equivalent of 100 gallons of jet fuel.

Not willing to wait for others to produce a certified, working system, easyJet, a London-based discount airline, is developing its own hybrid hydrogen fuel-cell system that could power taxi operations with zero emissions, the company told AvWeb. “Each aircraft would have motors in their main wheels, and electronics and system controllers would give pilots total control of the aircraft’s speed, direction, and braking during taxi operations.  The system would therefore reduce, if not remove altogether, the need for tugs to maneuver aircraft in and out of stands, delivering more efficient turnaround times and increased on-time performance.”

Working with students at Cranfield University in the UK, easyJet hopes to test their hydrogen-fuel cell powered system by year’s end.

easyJet uses a hydrogen fuel cell in the aircraft’s cargo area, much like the system tested by Lufthansa and Airbus several years ago.  Taking the kinetic energy recovered during braking, like a Formula 1 racer’s KERS (kinetic energy recovery system), the system charges lightweight batteries.  That stored energy powers the motorized wheels, eliminating the need to fire up the jet engines until the airplane is at the runway threshold. 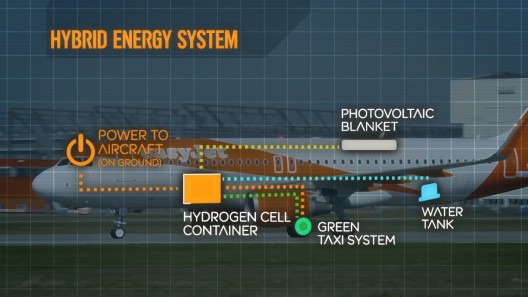 20 minutes of taxi time on each flight, with the multiple daily takeoffs and landings for each plane in easyJet’s 240 plus fleet, adds up to about 4 million miles a year. Even the water vapor exhaust from the fuel cell will be used to refill each airplane’s water tank.

Students at Cranfield University were asked to develop ideas for what air travel might look like in 20 years, as part of a competition to celebrate easyJet’s 20th birthday last November.  They came up with this plan, which could save up to 50,000 tons of fuel and reduce CO2 emissions.

According to the University, easyJet “is committed to reducing its passengers’ carbon footprint and has set new targets for 2020 which will see a reduction of 7% over the next five years compared to ‎it‎s emissions today, which are 81.05 grams CO2 per passenger kilometer.”

easyJet has enjoyed a 28-percent decrease in emissions over the last 15 years, and has a 22-percent lower carbon footprint per passenger than “traditional” airlines.  Even though the two identical airplanes fly the same routes, the budget airline loads its aircraft to near capacity, uses the latest technology and operates more efficiently, according to the airline.

Ian Davies, Head of Engineering for easyJet, explains, “At easyJet, we are continuing to apply the use of new digital and engineering technologies across the airline.

“The hybrid plane concept we are announcing today is both a vision of the future and a challenge to our partners and suppliers to continue to push the boundaries towards reducing our carbon emissions.

“It’s also a great example of the benefits of our strategic relationship with Cranfield University.”

Perhaps the cabin amenities and the knowledge that passengers are flying “green” will make up for easyJet’s always-filled cabins.