AvWeb.com has turned a moderately skeptical eye on a new energy development that would sound too good to be true if it weren’t for the prominent names involved.  John Podesta, former White House Chief of Staff, is on the Board of Directors – and even more convincing, George Church, sequencer of the human genome, is a founder of and science advisor to the firm, Joule Unlimited, Inc.

Their web site has more registered trademarks than Burger King*, including Liquid Fuel from the Sun™, Helioculture™, SolarConverter™, and direct-to-end-product™.

Joule’s technology promises Diesel or ethanol liquid fuels in huge amounts, using “proprietary organisms” to directly convert CO2 struck by sunlight into replacements for existing fossil fuels.  According to Joule, “Our technology has already been proven with the direct conversion of CO2 to liquid hydrocarbons and ethanol, avoiding the economic and environmental burden of multi-step, petroleum- or biomass-dependent methods.”  Claiming “commercial-ready” status, Joule says its interconnected components are “scalable and customizable to any desired output levels based on land and CO2 availability.” 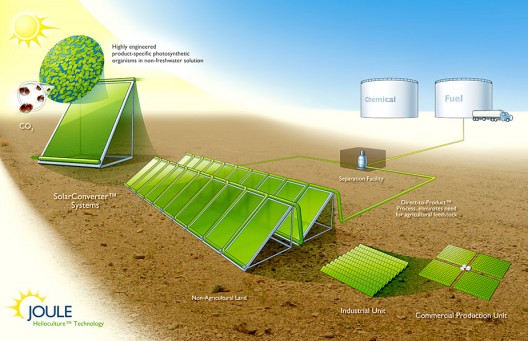 Promoting an “ecologically smart method,” “Joule’s production process avoids the depletion of precious natural resources, with no dependency on agricultural land, crops or fresh water. At the same time, an independently-conducted lifecycle analysis shows that, through our intake of waste CO2, we have the potential to reduce harmful carbon emissions on a large scale – up to 90% in some instances.” Organisms used in the system are designed to work only in the closed system, with their inadvertent release into the outside environment leading to their swift and harmless (to other living things) demise.

George Church’s background as creator of the first direct genomic sequencing method, innovations in DNA reading, and other highly complex studies lends credibility to the organization and its rather incredible goals, including production of up to 15,000 gallons of Diesel fuel or 25,000 gallons of ethanol per year per acre.  If production did achieve the 50X efficiencies of biofuel production and lead to $30 per barrel fuel, we might see a return to $1.50 per gallon gasoline.

As always, exercise caution in evaluating such ventures.  Your mileage may vary.

*The hamburger chain actually registered “Have it your way,” taking a long-time argument-ender out of the public domain.