With over 30 electrical flight exhibitors at Friedrichshafen, Germany’s Aero 2010 International Exposition for General Aviation, selection of this year’s E-Flight Award winner must have been particularly difficult. The”E”of the E-Flight portion of the huge show represents, “Electrical, Ecological and Evolutionary.” Thevenot’s machine is all those. 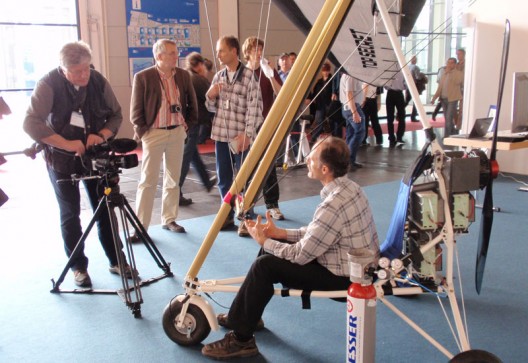 Gérard Thevenot flew his hydrogen-powered ultralight “trike” across the English Channel in July, 2009 (“Man of La Manche”, October 29, 2009), with a Geiger/Eck HP-10 electric motor powered by a hydrogen fuel cell, “without the onboard presence of an accumulator or battery.” Showing his 55 kilogram (121 pounds), seven kilowatt (11 horsepower), 12 meter (37 feet) span ultralight at last year’s Expo, he went on to demonstrate its capabilities in the following months. Its light weight allows a consumption of only 550 grams per flight hour, and the craft’s 5-liter tank allows about one hour flying time. In an environmentally friendly hint of its passing, the craft leaves behind only a mist of water vapor.

According to the Expo’s press release, “This is not the first of Thevenot’s fuel cell projects to cause an international sensation. In 2006, he won the Shell Eco Marathon with a hydrogen-powered automobile, which he designed in collaboration with the École supérieure des sciences et technologies de l’ingénieur de Nancy (ESSTIN). With a hydrogen supply corresponding to one liter of gasoline, Thevenot set the world-record distance of 4,117 km, which in terms of gasoline fuel consumption equates to 0.02343 liters per 100 km.”