e-Genius spent July 4 crossing the Alps both ways from Germany to Italy, a first for a two-seat, battery-powered airplane.  Although the Elektra One Solar from PC-Aero GmbH is lighter and seats only one, its flights starting two weeks before and ending two days before e-Genius’s journey are equally proud accomplishments.

The outgoing flight started in Unterwössen, Germany on June 25, crossed over the Grossglockner and landed, according to PC-Aero’s description, “In the sunny town of Lienz in East Tyrol, Austria.  The flight took around 2.5 hours. After the successful flight on the south side of the Alps, Elektra One Solar started [on its next trip] on 2 July (few days before the eGenius of the University of Stuttgart also flew over the alps) in quite difficult weather conditions. Despite headwinds and strong gusts the plane crossed the Alps at an altitude of more than 3,000 meters and landed after about 2 hours and 190 kilometers (117.8 miles) [in] flight, as planned, at the airfield in Zell am See, Austria.” 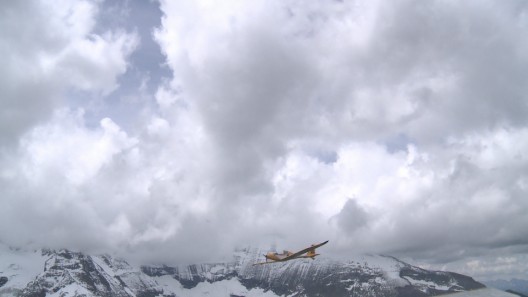 Not exactly severe clear, weather for the flights was windy and turbulent.  Photo: PC-Aero

280 series production solar cells from the German company Solar World fed an 11.5 kilowatt-hour battery pack, and provided about 30 percent of the energy needed for the flights.  Maximum range for the Elektra One Solar is about 500 kilometers (310 miles).

For the southerly flight the pilot was Klaus Plasa, an experienced test pilot with thousands of flight hours on the Transal (a twin-engined transport craft), gliders, and as a test pilot for vintage airplanes and aerobatic aircraft.  Norbert Lorenzen made the return flight. He has more than 10,000 flight hours on light airplanes, gyrocopters, aerobatic airplanes and helicopters, and has the most experience on Elektra One.

After the landing in Lienz the batteries were at about 25 percent – even though Plasa loitered about one hour for the chase airplane used for photos and videos.  Had he landed following a direct flight he would have had about 50-percent battery capacity left, according to PC-Aero.  The pilot recharged the batteries for the next flight. 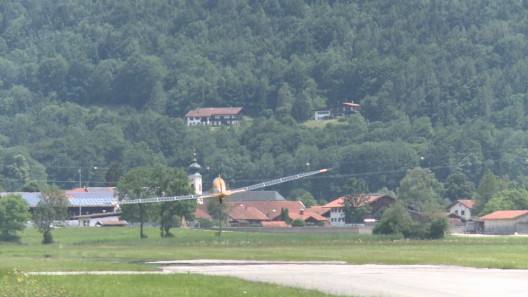 On the flight from Lienz to Zell am See Norbert, Lorenzen landed with about 30 percent battery capacity, notable after flying against a “quite strong head wind.”

The Elektra One Solar is a very light aircraft, weighing only 300 kilograms (660 pounds) all up, battery weight accounting for 60 kilograms (132 pounds), and a 100 kilogram (220 pound) maximum payload leaving a 120 kilogram (264 pound) airframe, motor, retractable landing gear and everything else – not bad for a 13-meter (42.7 foot) wingspan airplane.   It will be certified in the German Ultralight Class (LTF-UL) by the end of this year. 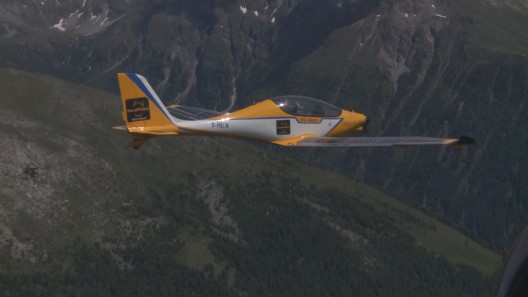 Pilot happy to be in the sunshine shares a thumbs up with the camera plane. Photo: PC-Aero

The Elektra range of aircraft is intended for multiple missions, so this flight carried a special high resolution camera for 3D landscape mapping (up to five centimeter (just under two inches) resolution. The system was developed by the partner company Elektra UAS GmbH for use in upcoming unpiloted versions of the aircraft.

Calin Gologan, CEO of PC-Aero GmbH and its unmanned aerial vehicle spinoff, says, “We need not reinvent the aircraft for clean mobility, we need only integrate and optimize existing technologies.” 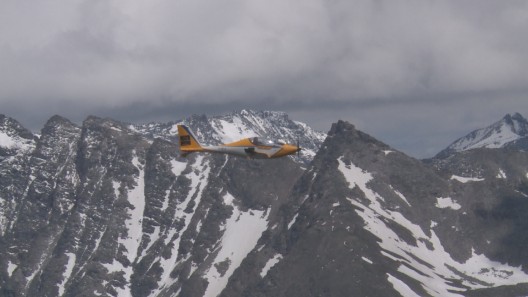 Double motor, rather than 16kW single, might have been welcome here. Photo: PC-Aero

He points to the integration of light-weight structures, highly efficient motors and controllers, modern lithium-ion batteries, and solar cells on his aircraft as proof of his practicing what he preaches.

In the meantime, PC-Aero forges ahead in its design, prototyping and certification work, both for its own products and for clients.  The firm entered the electric-solar aircraft business five years ago, and has since build five Elektra One electric/solar aircraft in sizes ranging from 8.6-meter (28.2-foot) to 15-meter (49.2-foot) wing spans.

Design of the two-seat side-by-side version, the Elektra Two Trainer, is finished and construction will start this year with a license contract signed by U. S. Partner George Bye and his firm, Aero Electric Aircraft Company.

A two-seat tandem version, Elektra Two Record, was designed for high altitude stratospheric record flights up to 24 kilometers (over 78,000 feet) altitude. One prototype was just ordered by the Swiss company SolarXplorer.

Calin says the prototype is under construction and the first flight will take place in the first part of next year.  Fuselage molds are ready for use.

Less high-flying Elektras are also under development.  Calin announces that the HPD-25D motor will fly on one of his craft in the next week.  This is the dual motor that will power the American Sun Flyer, a good choice for a training craft since the redundancy of what is essentially two motors will provide additional safety.

In the next few weeks, the team hopes to fly the 15-meter span Elektra with solar cells, with the hopes of going after some distance records.

Showing the versatility of the basic design, Elektra UAS is responsible for the unmanned (also Optional Pilot) applications of the aircraft platforms designed by PC-Aero. Applications include 3D landscape/city mapping and communications such as internet and mobile phone networking.

Congratulations to Calin and his pilots on their adventures over the Alps, and continued best wishes for ongoing success.  Thanks to Calin and his wife, Birgit Weissenbach, for their help in providing information and photographs for this blog entry.