Despite our adoption of electric powerplants, at least at an experimental phase, one remnant of previous technologies remains.  And it threatens aviation’s future more than possibly any other aspect of flight.

Charlotte Whitfield, head of the Aeroacoustics Branch at NASA Langley Research Center, quietly but effectively discussed a problem that plagues not only aircraft designers, but also the people who live near aircraft – noise.  Speaking at EAS IV, she touched on the concern that reducing aircraft noise is an increasingly important aspect of aviation, with urban zones encroaching on formerly remote airfields and a growing population likely to grow irate at having their golf game or quiet time disturbed by an unwanted aeronautical din.

As she showed in her presentation, the issue is an enormously complex one technically, and requires careful research and evaluation to make progress.  Whitfield dispensed a plethora of new abbreviations and terms in her talk, and provided an insight into why the noise won’t go away without some serious calculation on our part.  CAFE considers it important enough to have 50 documents on the subject in its technical library, more than on any other topic. 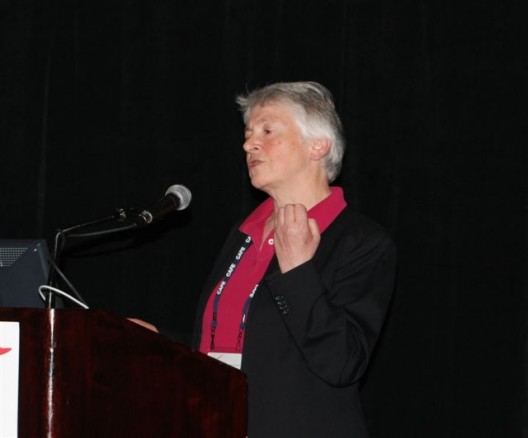 When people write embittered emails to their local FAA office, or complain to the 911 operator, they are likely to be experiencing an unacceptable EPNL (Effective Perceived Noise Level) or SEL (Sound Experience Level).  As implied in both terms, this can be a highly subjective response to the perceived sound level, and varies from person to person.  A pilot hearing a light twin passing overhead, for instance, may be excited by the sound, while a non-flying neighbor may be annoyed at the noise disturbing her attempt to meditate or quiet her child.

Both terms relate to not only the noise intensity, but the second includes its duration.  A short burst of sound may be a temporary annoyance, but long-term exposure to that same sound can be damaging to the auditor.  Sound level is normally measured in what auditory scientists call the A-weighted decibel scale (dBa), a logarithmic scale.  Roughly speaking, sound intensity doubles for every three dB increase.  Prolonged exposure to levels below 70 dBa are not harmful to the average human, but even short exposure to greater sound levels can cause hearing loss.

For perspective, a person standing less than a foot away has to shout to be heard over a 95 dB noise level, which can cause hearing loss with only 45 minutes daily exposure.  If that person has to shout in your ear to be heard, the sound level is over 105 dB, and can cause permanent hearing loss after only five minutes exposure.  This should alert us that wearing those headphones and earplugs is an important part of maintaining our health.  Airplanes, until we achieve all-electric flight, are noisy.

Steady loading noise and thickness noise are related to the rate at which a blade passes through the air.  For propeller or helicopter blade, steady loading noise results from cyclic pressure changes as this passage occurs.  Thickness noise results from the regular parting of the air.  Both types of noise are related to blade passing frequency (BPF) and its harmonics.  This can be shown by the equation:

in which B is the number of blades that pass a fixed point (such as the side of a fuselage on a twin-engine craft – or a cowling air opening on a single-engine airplane) multiplied by the number of times the propeller turns per minute, divided by 60, to give the frequency in Hertz (cycles) per second.  In a steady loading state where the airplane is stationary or moving at a steady speed, the propeller generates “steady loading” noise.  Changes in rpm or variations in atmospheric conditions (random gusts, for instance) can cause “unsteady loading” noise.

L. Gutin’s equations used in NACA papers by Harvey H. Hubbard and Leslie W. Lassiter show a method for predicting the blade passing frequency and its harmonics in steady loading.

Ms. Whitfield recommended several routes of study for those interested in pursuing the matter.  Hawkings and Lawson used Gutin’s equations as a basis for performing time domain methods in their analysis.  Farassat applied computational fluid dynamics to the problem.  Again, many of these papers are in the CAFE Foundation technical library.

At a practical level, well-known precepts apply.  Ms. Whitfield’s recommendations include turning a large propeller slowly to reduce disk loading and noise, and adding thin, stiff propeller blades.  These require either a high-torque, slow motor, or a geared, high-speed motor in the electric aircraft of the future, and add mechanical and electrical problems that require solutions.  As her talk suggested, these problems require careful analysis and rigorous mathematical foundations for their resolution.