Georgia Institute of Technology researchers have developed a self-charging power cell that uses a piezoelectric membrane to convert mechanical energy to chemical energy, then stores that energy until it can be released as en electrical current. Combining the power generator with the energy storage device, this hybrid is claimed to be more efficient than systems with separate generators and batteries.  When the piezoelectric membrane is flexed, it moves lithium ions in the power cell from one side of the cell to the other. Membranes in shoe heels and soles could produce power when a person walked, powering small electronic devices such as calculators or cell phones.

Zhong Lin Wang, a Regents professor in the School of Materials Science and Engineering Georgia Tech, explains the distinguishing feature of his team’s innovation. “People are accustomed to considering electrical generation and storage as two separate operations done in two separate units. We have put them together in a single hybrid unit to create a self-charging power cell, demonstrating a new technique for charge conversion and storage in one integrated unit.”

Georgia Tech’s announcement details the chemical and electrical action taking place in the power cell. “The power cell consists of a cathode made from lithium-cobalt oxide (LiCoO2) and an anode consisting of titanium dioxide (TiO2) nanotubes grown atop a titanium film. The two electrodes are separated by a membrane made from poly(vinylidene fluoride) (PVDF) film, which generates a piezoelectric charge when placed under strain. When the power cell is mechanically compressed, the PVDF film generates a piezoelectric potential that serves as a charge pump to drive the lithium ions from the cathode side to the anode side. The energy is then stored in the anode as lithium-titanium oxide.

“Charging occurs in cycles with the compression of the power cell creating a piezopotential that drives the migration of lithium ions until a point at which the chemical equilibrium of the two electrodes are re-established and the distribution of lithium ions can balance the piezoelectric fields in the PVDF film. When the force applied to the power cell is released, the piezoelectric field in the PVDF disappears, and the lithium ions are kept at the anode through a chemical process.

“The charging cycle is completed through an electrochemical process that oxidizes a small amount of lithium-cobalt oxide at the cathode to Li1-xCoO2 and reduces a small amount of titanium dioxide to LixTiO2 at the anode. Compressing the power cell again repeats the cycle. When an electrical load is connected between the anode and cathode, electrons flow to the load, and the lithium ions within the cell flow back from the anode side to the cathode side.”

Compressing the power cell 2.3 times a second (2.3 Hertz), researchers raised the 327 millivolts to 395 milliviolts in four minutes (about 552 squeezes). They then released the built-up charge at one milliamp of current for about two minutes until the cell reached the original 327 millivolts. Researchers estimated the cell could store 0.036 milliamp-hours of energy – not a great deal, but the 500 power cells built so far would total 18 milli-amps, about equal to two percent of an AAA battery’s total capacity.  Wang thinks this can be improved with better materials that would consume less of the energy now going into flexing the cell’s stainless steel case. 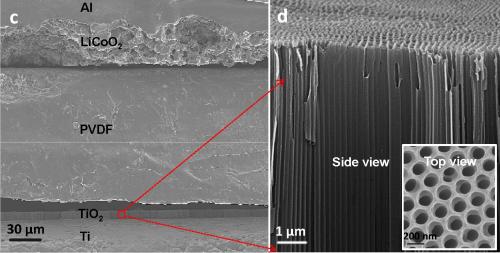 A closeup of the layers and their incredible thinness

Wang concludes, “One day we could have a power package ready to use that takes advantage of this hybrid approach. Almost anything that involves mechanical action could provide the strain needed for charging. People walking could be generating electricity as they move.” On a larger scale, perhaps a train rolling over tracks, or an airplane’s wings flexing could generate a more significant and practically useful amount of energy.

This blog has reported on other experiments in producing electricity with piezoelectric materials, a field that has increasing interest.

Funding came from a variety of sources: the Defense Advanced Research Projects Agency (DARPA), the U.S. Air Force, the U.S. Department of Energy, the National Science Foundation, and the Knowledge Innovation Program of the Chinese Academy of Sciences.