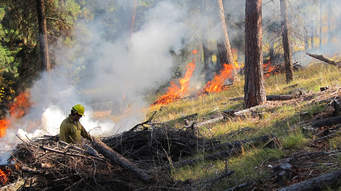 Three congresspeople flew on wood-waste fumes this week, aboard an Alaska Airlines Boeing 737-800 on its way from Seattle-Tacoma International Airport (SEATAC) to Washington, DC.  It was the first commercial flight to “to be powered by a blend of renewable jet fuel made from forest residuals.” 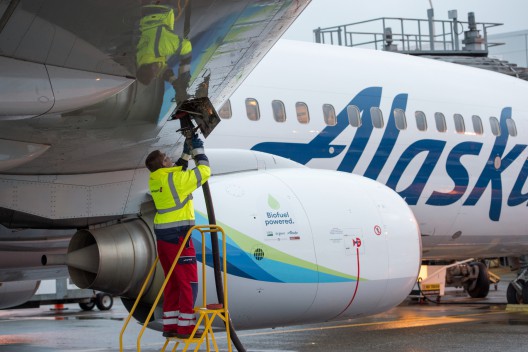 Alaska, Boeing, and SEATAC have partnered on including biofuels in the mix since early 2015, as reported here.  Later that year, United made flights out of Los Angeles International (LAX) using a blend of fossil-based jet fuel and biofuels made from farm and municipal waste.  Keeping waste out of landfills and producing a lower carbon-footprint fuel has several benefits.  In the case of forest waste, those branches, limbs and twigs that litter the forest floor after a timber harvest, cleaning that debris away lowers fire risk in the warm seasons and makes renewable isobutanol.

Developed through a five-year project led by Washington State University and the Northwest Advanced Renewables Alliance (NARA) initiative and the U. S. Department of Agriculture, the program is now nearing completion.  This first flight on the 1,080 gallons produced so far marks a practical demonstration of the fuel’s viability.

Funded with $39.6 million grant from the National Institute of Food and Agriculture (NIFA)  “To support research on biofuels and biochemical, foster regional supply chain coalitions, empower rural economic development and educate the public on the benefits of bioenergy,” the project comprises 32 member organizations from industry, academia and government laboratories.

GreenAir quoted some distinguished passengers.  “Three members of the House of Representatives were on the flight, including Congresswoman Suzan DelBene. ‘This flight demonstrates that Washington state’s innovation economy is once again at the forefront of collaborative, transformative research by using material that would otherwise be discarded to create a new biofuel,’ she said. ‘We have a tremendous opportunity in our region to build a new green economy and find innovative solutions to address climate change for our health and future generations, as this project highlights.’”

“US Senator for Washington, Maria Cantwell: ‘The flight comes after years of investments to help the aviation biofuels industry take off. By creating these sustainable biofuels, we will revitalize our rural agriculture communities, foster economic growth, reduce greenhouse gas emissions and cur our dependence on foreign oil while growing our competitiveness in global markets.’”

NARA Executive Director Ralph Cavalieri said, “This flight is a tribute to all of our NARA partners, and especially to NIFA who supported our mission to facilitate the revolutionary development of biojet and bioproduct industries in the Pacific Northwest using forest residuals that would otherwise become waste products.” 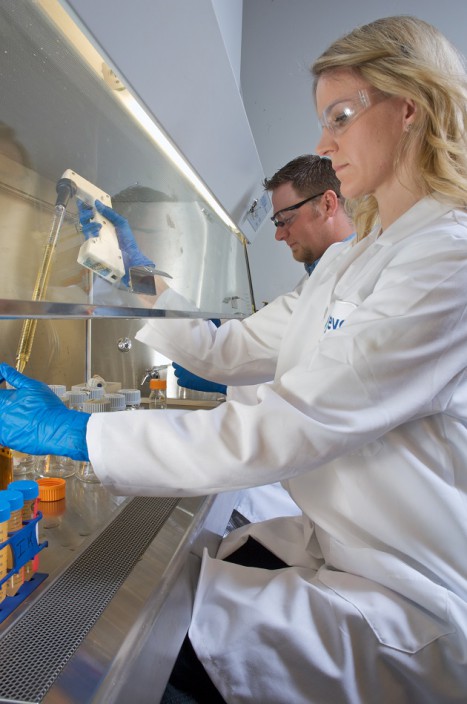 Gevo laboratory testing of isobutanol made from forest waste in Englewood, Colorado

Gevo CEO Pat Gruber added, “We are pleased that we had the opportunity to prove, through the NARA project, that cellulosic sugars from wood can be used to successfully make commercial jet fuel.”

GreenAirOnline reports, “Alaska and Gevo have already partnered on commercial biofuel flights from Seattle to San Francisco and Washington DC in June this year that used a 20% Alcohol to Jet (ATJ) blend derived from sustainable non-edible field corn grown in South Dakota.”

Alaska Airlines Senior Vice President for Communications and External Relations, Joe Sprague, said the biofuel used on yesterday’s flight was “especially exciting since it is uniquely sourced from forest residuals in the Pacific Northwest.”

Obviously, one flight with 20-percent biofuel will not cure rising emissions, but “the airline said if it were able to replace 20% of its entire fuel supply at Seattle-Tacoma, it would reduce CO2 emissions by about 142,000 tons per year.”