Jack Lambie, an early hang-glider pilot, wrote in a mid-seventies’ Soaring Magazine of a dream cross-country using ultralight sailplanes with self-launching devices that allowed high launches from flat ground when foot launching was not practical.  Lambie would be proud of recent developments in Denmark.

Three years ago, we first noted the Skynch, a paraglider (potentially hang glider) self-launching device under development.  Then it seemed to disappear from view, only to re-emerge as a fully-developed electric winch with a remote for the pilot.  The self-controlled nature of the setup allows a pilot to literally pull him or herself into the blue. 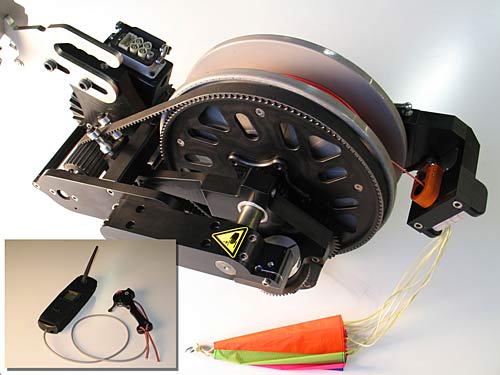 The video, which the Skynch people do not allow to be embedded here, gives a convincing demonstration of the system’s ease of use and functionality.

Skynch uses four Panasonic LC-XB12100P, 12Volt, 100-Amp-hour batteries to produce the 48 Volts necessary to pull a paraglider. Communicating through an antenna attached to the stationary part of the system, the pilot controls takeoff through a 490 gram remote hand control.  This communicates commands through the antenna to a controller, “the heart of the system,” which translates the pilot’s commands to the winch, automatically takes care of details such as shutting down the winch when the end of line is reached, protecting against overloads, and allows the pilot to concentrate solely on speed control.

Mads Syndergaard  reported on using the Skynch to achieve a formidable cross-country flight of over two hours between Odense and Nyborg – especially impressive for a paraglider.

“Yesterday (July 2, 2010) we did a very important “test”, where more than one pilot was in the paddock hoping for an XC flight. We currently have only one remote control (although you can have as many as you need), so we needed to do the first tow in the traditional manner, where a winch operator on the ground controls the winch. The second tow was then done as per the Skynch principle, with the pilot in charge of the throttle.

“An added benefit of the Skynch in this situation is that the winch operator can stand right next to the pilot (rather than 1200m away, as it is normally done with other stationary winching designs) and thus be in much better control of the critical start phase.

“Anyway, it all worked a song, and I got a nice 2-hour flight out of it: http://www.paraglidingforum.com/leonardo/flight/347775”