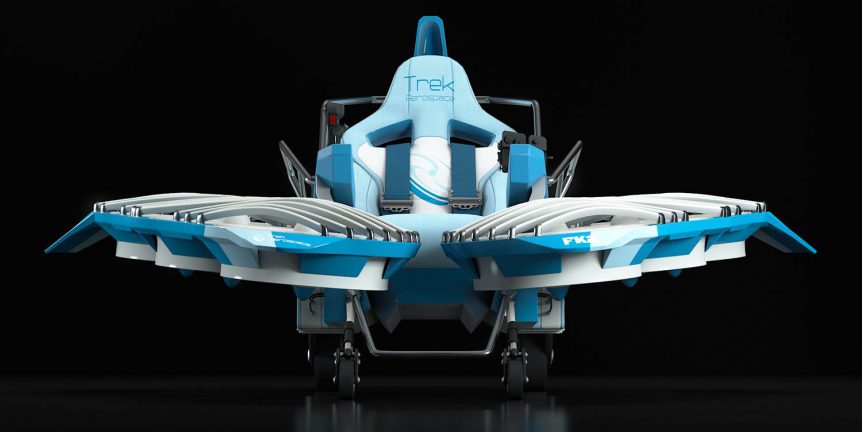 Boeing just announced the ten winners of Phase I in its GoFly competition, in which entrants design, build and fly a “personal flying device.”  As Boeing explains, contest rules are designed to enable entrants “To foster the development of safe, quiet, ultra-compact, near-VTOL personal flying devices capable of flying twenty miles while carrying a single person.”  The list of partners and co-sponsors is impressive and includes virtually all major American aviation advocacy groups.

As the Green Flight Challenge demonstrated seven years ago, prize money encourages a grand series of investments by individuals in hopes of winning a prize.  In this case, 3,000 entries by 725 teams from 95 countries presented drawings and documents describing their proposed PFD, with a select 10 advancing to Phase II, which will require a demonstration of the proposed machine’s ability to perform as promised.

“To be able to engage so many individuals from leading universities, major corporations and startups, and connect them through our community of innovators enables us to impact the industry in an unprecedented way,” said GoFly CEO Gwen Lighter. “We know that the road to personal flight is long and difficult, but we are incredibly encouraged and inspired by the volume of strong submissions that we have received in Phase I. This is only the beginning.”

More pessimistically, “’The GoFly prize is impossible,’ said Michael Hirschberg, executive director of the Vertical Flight Society, a technical society for people working on vertical takeoff and landing flight. ‘There is no way — based on conventional thinking — that someone can make a device that can meet the low noise, small size and long endurance requirements that it requires.’”

“Hirschberg is hoping to be proved wrong. He hadn’t yet seen the winning GoFly designs, and at this stage, it remains difficult to tell whether anyone can achieve the minimum contest requirements.”

One of the promising features of this phase is contestants’ access to an international group of experts in aircraft design, structure, power, safety and other fields.  Boeing explains, “Experts engage with innovators and share their insights in two different ways, as Mentors or Masters. Mentors work directly with innovators in their respective areas of expertise, providing tailored advice on projects and progress. Masters host monthly online lectures, offering teams around the world opportunities for learning and discussion.

The following Master Lecture provides a detailed overview of the rules, showing that contest officials have considered all or most of the aspects of the design phase.

Check out YouTube’s GoFly Master Lecture list.  It’s an impressive range of experts presenting talks on all aspects of the competition.

But Wait!  There’s Still Time to Jump In!

For those of you who are throwing in the towel because you missed out on Phase I, you can enter in Phase II, a ruling that helps increase someone’s chance of winning and ensures a good number of potential finalists.

The Ten Phase I Winners 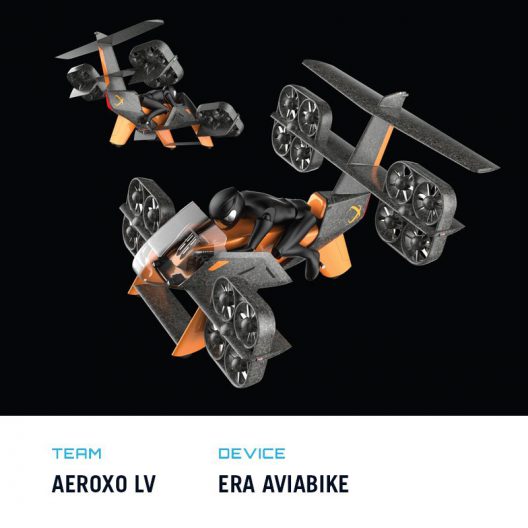 Looking very much like a café racer motorcycle with now less than 16 rotors on four flying surfaces, this Latvian entry combines VTOL capabilities with fixed-wing speed.  At least all propellers are not in direct line with frangible body parts.  The single-page website shouts, “Yes, it’s like a motorbike, but one doesn’t need roads with it.” 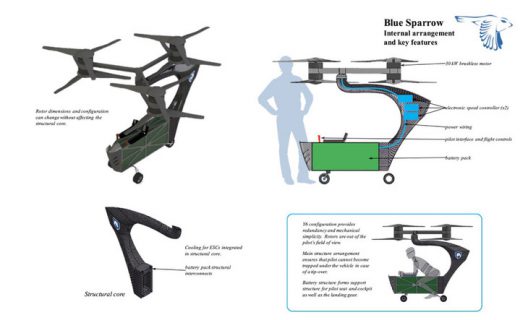 Jack Langelaan, Associate Professor of Aeronautical Engineering at Penn State, explains the team’s entry.  “We entered the competition because this was a very interesting and unique aircraft design project, but also because academically, it would be a great opportunity for the students in our aircraft design class and for our graduate students.  We’ve reached a point where improvements in batteries, electric motors and electronic speed controllers have enabled new aircraft configurations. We’re excited to begin Phase II.”  (Incidentally, Langelaan led the winning team in 2011’s Green Flight Challenge.

Hummingbuzz by Georgia Tech from the United States 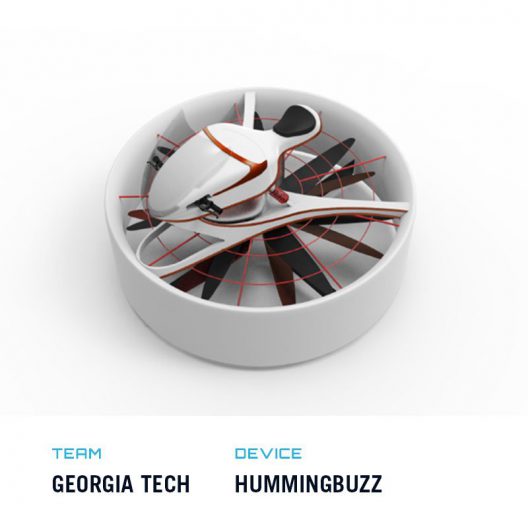 Another motorcycle-like vehicle, Hummingbuzz features a fully electric, ducted coaxial rotor configuration, with the fuselage on top.  This configuration makes one hope that adequate protection for the rider is part of the design.  Georgia Tech’s press release notes, “[Alistair] Sequeriahad to quickly learn new and advanced noise software to successfully conduct the preliminary computational fluid dynamics (CFD) and noise simulations, which ultimately lead the team to execute on the winning design.”

Vantage by Leap from the United Kingdom 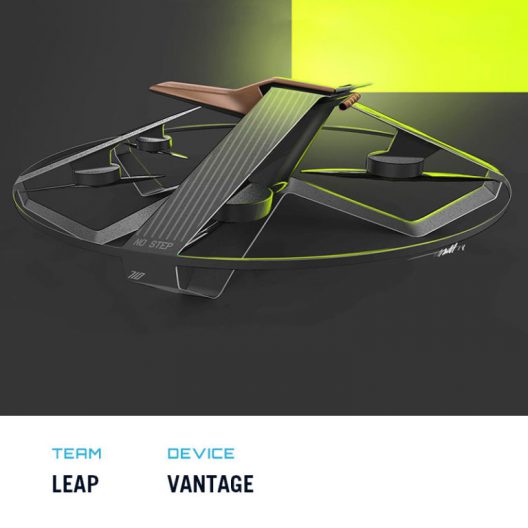 “Vantage is a five-rotor airbike,” pretty much sums up what most publications managed to say for this entry.  Reading Boeing’s more detailed material shows that the team is composed of aerospace professionals who’ve worked on projects such as the B2 bomber, serial hybrid power systems, “ballistic and heat-resistant materials for operation in extreme conditions,” and “a fuel cell UAV project at Boeing Phantom Works.”

Mamba by Mamba from the United States 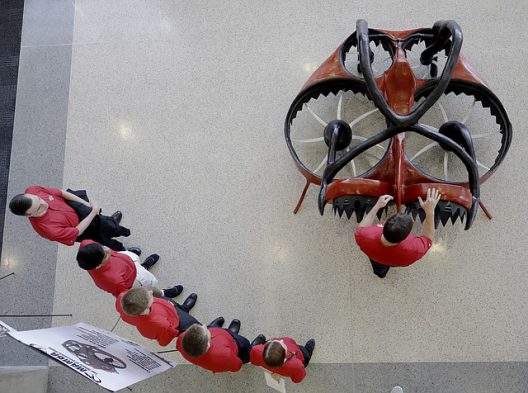 Mamba’s design emphasizes safety, certifiability, and performance.  According to the Kansas City Star, “’The KU team’s Mamba… six-engine hexcopter has a roll cage and is expected to have a training mode for new pilots. Originally the team envisioned a flying motorcycle and a name like ‘Sky Hog,’” said Lauren Schumacher, the team’s leader and a Ph.D. student studying guided munitions.”

Pegasus 1 by Scoop from the United States 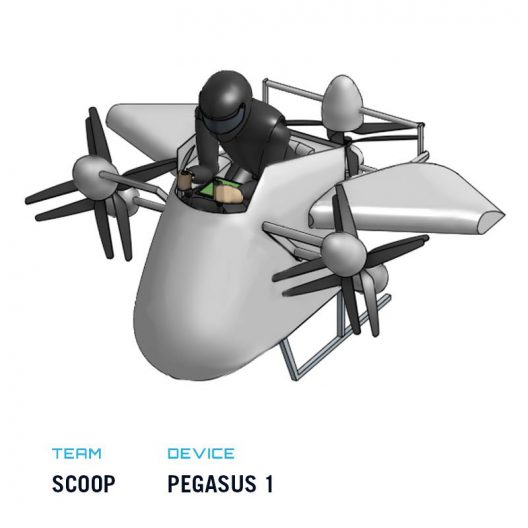 The Pegasus us a Y6 tilt rotor with a wing and a hybrid powertrain with a cruise speed of 70 knots (80mph), according to Boeing.  The team seems to consist only of the team captain: “Alex Smolen is a self-taught programmer who has experience creating and running a company. Smolen has built a full stack application and has in-depth experience with the design process. He has a bachelor’s in accounting, and experience in flying and building multicopters.”

S1 by Silverwing from the Netherlands 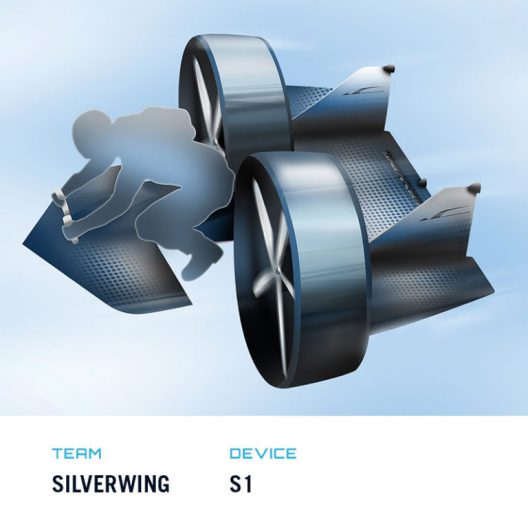 A canard configuration with a motorcycle-like position for the rider, the S1 is powered by two electric motors with ducted rotors. The aircraft makes a 90 degree transition from vertical take-off to horizontal cruise flight.  Not to join the chorus of doubters and hecklers, your editor is bothered by the proximity of the rider’s hindquarters to the rotor blades – especially when one considers this will take off and land with the rider facing straight up.

teTra 3 by Tetra from Japan 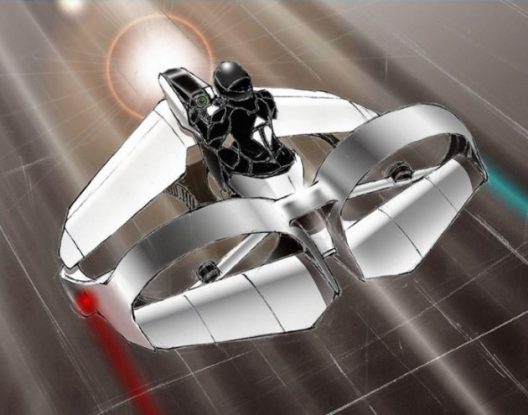 Tetra’s description, as that of Vantage, is terse.  “The teTra 3 is not only efficient enough, but also stylish enough to meet commercial requirement.”  The team, though, has a certified project manager and members from Honda, a software company and a major robotics firm.

Harmony by Texas A&M University from the United States 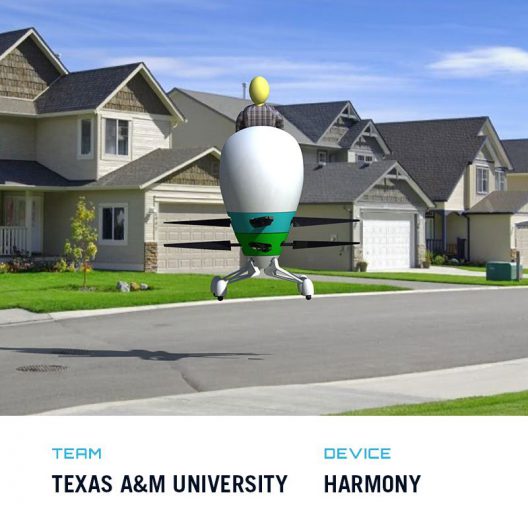 Harmony is a high-TRL [technology readiness level] compact rotorcraft designed to minimize noise and maximize efficiency, safety, reliability, and flight experience.  Comments abound about the pilot’s exposed position and vulnerability if the machine turns into a giant Yard Dart.  The contra-rotating propellers are large enough to reduce noise, perhaps, depending on rotational speed.  As with most teams, Harmony relies on a multi-discipline group to make it a viable candidate.

FlyKart 2 by Trek Aerospace from the United States 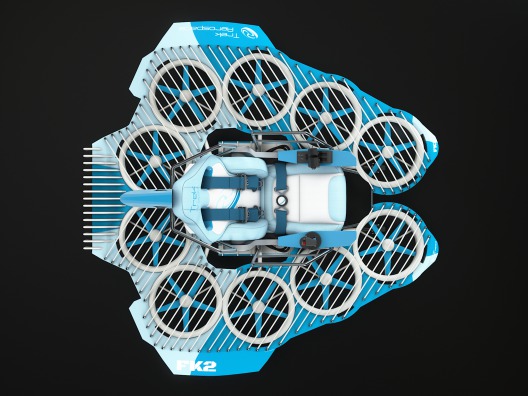 FlyKart 2 is a single-seat, open-cockpit, 10-rotor, ducted fan, electrically-powered, VTOL aircraft.  Trek has flown FlyKart 1, and number 2 is described by its designers as. “A new and improved version of our revolutionary FK1, it has ten of our ducted propellers and is custom designed to meet the challenges’ specifications.”  It’s 9.6 kilowatt-hour battery will allow FK2 to cruise at 45 knots (51.75 mph) for 30 plus minutes.  Its screened propellers will help protect pilots and passersby.

Possibly Sean Captain, writing for Fast Company, did not pen the headline, editors often tackling that clickbait-luring task.  His writing seems more thoughtful, including this hopeful note from GoFly’s co-founder.  “There’s been a convergence of all of these breakthrough technologies that make this the first moment in time where we have the ability to make people fly,’ says Gwen Lighter, who dreamed up the GoFly prize, recruited Boeing to bankroll it, and now serves as CEO. Many of the advances come from the world of drones–high-efficiency motors, high-capacity batteries, and cheap navigation and stabilizing technologies that keep even newbies on course and out of danger.”

Captain includes some rational voices less enthusiastic than Ms. Lighter.  “’Batteries have much less energy density than liquid fuel,’ says Mike Hirschberg, executive director of the Vertical Flight Society, one of GoFly’s partner organizations. Depending on the technologies, fuel could pack on the order of 50 times more energy per unit of weight, he reckons.”

Engadget stopped at the headline, giving a short, but restrained bit of copy to the news.

Engadget looks at the various hurdles still to be leaped.  “But there could still be social hurdles, like noise. Prize criteria specify that loudness, from 50 feet away, not exceed 85 decibels. That’s about as loud as a diesel truck going by at the same distance and similar speed. Lauren Schumacher estimates that Mamba will put out only 67 dB, about the sound of a noisy dishwasher. Would that satisfy neighbors?

“Cities are also struggling with congestion from ever-more motorized devices, including electric scooters and skateboards. Studies show that car services like Lyft and Uber may ultimately put more vehicles on the road. Commercial drone flights are also on the rise in urban areas, thanks to new business-friendly policies from the FAA. And flying cars are coming. Uber wants to start tests in 2020 and commercial service by 2023.

“‘However, the FAA regulates aircraft a lot more strictly than cities can regulate scooters,’ says Hirschberg. And it’s still not clear if the age of personal flight will even come to pass, at least at prices that make it more than a rare curiosity. ‘This GoFly prize intends to prove that it’s technologically possible,’ he says. “And whether this is something that society wants is a whole other question.'”