One of the hits of the Consumer Electronics Show at Reno, Nevada this year was the Gogoro scooter, an electrical and electronics showcase for its designers and makers.  The stylish two-wheeler, a svelte and quiet people mover, reminds one of the Vespa craze of the late 1950s and early 1960s, but does not belch a blue cloud or emit putta-putta (or papapapa as shown in the vintage commercial here) noises in its wake.

Its clean white lines reflect the kind of look we’ve come to expect from modern devices such as laptops, game consoles or other electronic toys.  That might be expected because of Horace Luke’s background as a product designer for HTC, Nike and Microsoft.  To some extent, the Gogoro includes a full menu of thoroughly modern touches, from its wrap-around lights to its information displays.

Luke and co-founder Matt Taylor started Gogoro initially to build electric scooters, but both have more products in mind and a fascinating scheme to keep their vehicles charged up.   Luke explains, “Gogoro is more than a startup. This is the start of an industry. Our products and business model will impact a variety of consumer areas to create a metropolitan ecosystem with better connectivity, easier access to energy, and a more enjoyable urban living experience.”  This confidence and broad vision might come from the $150 million in capital the company has raised, some of it from HTC Chairwoman Cher Wang.

Gogoro’s Panasonic batteries, neatly packaged in quickly swappable packages, will be available in charging centers around the urban areas where the scooters might be popular.  EV World noted the similarity of their way of distributing those batteries to the system developed by Asian Pacific Fuel Cells for keeping its hydrogen fuel cell scooters scooting.  In neither case can a user charge the scooters at home, but must “subscribe” to a network of stations where fresh energy can replace the spent hydrogen or battery cartridges.  This might seem like a major deal breaker for the battery electric scooter, which otherwise could be easily plugged in at home. 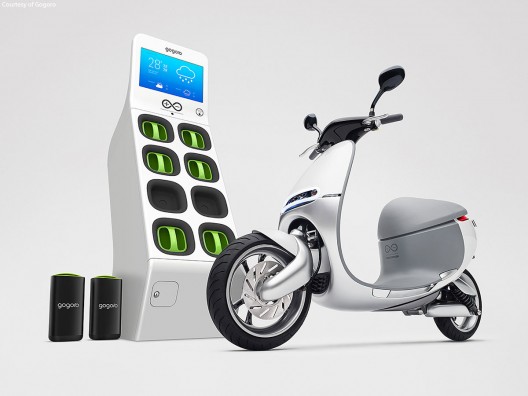 The makers counter this with the argument that swapping takes less than a minute, and that the problem of charging time is removed, with fresh batteries waiting for immediate transfer.  It really doesn’t matter how long it took the ATM-sized charging station to get the job done as long as fresh, fully charged packs are ready when the customer drives up.  Vendors can line up additional chargers as demand grows.  The scooter accelerates from 0 to 50 kilometers per hour (31 mph) in 4.2 seconds – not quite supercar fast, but certainly agile for a scooter.  Not too many two-stroke scooters can smoke their tires, part of the joy of having the torque of an electric motor at hand. 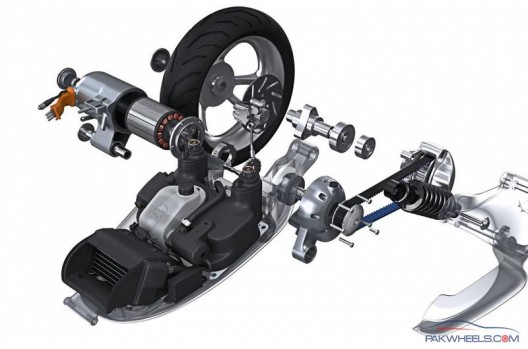 Gogoro’s compact power module and its components are lightweight

Since the scooter weighs a mere 207 pounds without batteries, the 6.4 kilowatt (8.58 horsepower) motor and drive train can’t weigh all that much, and such small, mass-produced items may become useful for ultralight aircraft applications. 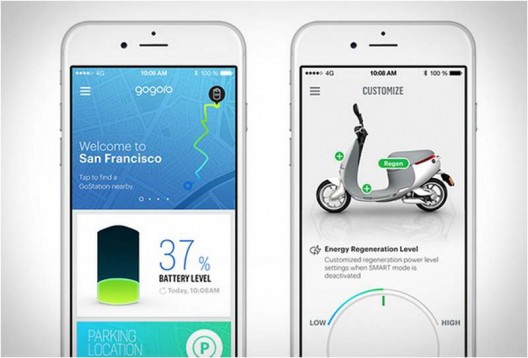 The scooter has a “Kit” car-like persona, with sweeping lights to indicate activation, Bluetooth connectivity to help a rider communicate with his or her mount, and over three million possible combinations of personalization options to make each scooter the owner’s own.  What can’t be one’s own are the battery packs, a way to keep riders coming back for more.  This provides an advantage of always having a fresh battery without the inevitable degradation of performance and replacement costs associated with owning the packs.  Batteries weight 20 pounds each and provide up to 100 kilometers (62 miles) range.

Owners can communicate with their Gogoro’s cell phone app via Bluetooth, and the scooter’s on-board near field communications (NTC) system talks to the many components of the scooter and to the battery charge stations.  A rider can always find the nearest available fresh battery.  The claimed ability of the scooter to “learn” the rider’s habits can enhance mileage from each battery pack, with 12 percent increases in endurance claimed after the Gogoro learns its master’s ways.

Several commentators have noted that you’re not buying a scooter, but a transportation system, with Gogoro owning the charging stations and batteries, and making it as convenient as possible to interact with that system.  This is not the only such program, Taiwan having a competitor in the Isuda City Cruiser electric scooters from Kenfa Advanced Technology Corporation and which has been active since April, 2014.

Very much like the hydrogen-canister swap-out for scooters from APFCT, The Gogoro’s battery distribution scheme ensures ongoing “fuel” sales for the manufacturer, with a way, at least in the confines of an island, of allowing freedom of mobility for riders.  Neither does much for cleaning up the smog generated by the two-strokers they would replace unless the electricity used to recharge or fill their hydrogen canisters comes from a clean source.

As a parting shot, here’s a video showing the distribution of hydrogen canisters in Taiwan – again, a more likely scenario within the constraints of an island.  The potential to use a few more of the canisters to power a very light car are intriguing, and again, lightweight components like this may have applications in ultralight aircraft.