Sitting next to your editor for the first day of CAFE’s ninth annual Electric Aircraft Symposium, Paul Bertorelli from AVweb, took copious notes, made sound recordings, and during coffee and lunch breaks and in after-hours sessions, interviewed the accomplished faculty at the Symposium.  His thorough and far-reaching reports appear in his last several days’ postings to AVweb.  Having stressed mightily while attempting to take understandable notes from each speaker’s talk, your editor can only be impressed by Paul’s super reportorial abilities, and his communicating the scope and importance of what took place at EAS IX. 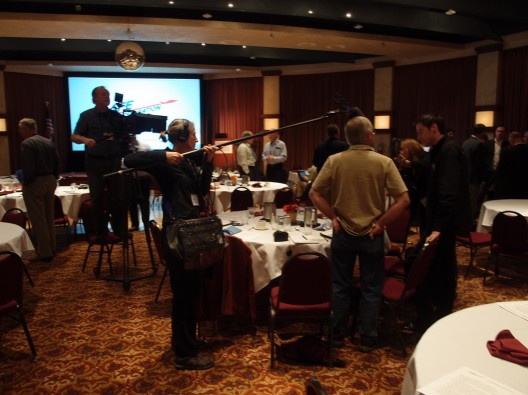 Professional film crew at EAS IX. Watch for the video!

From your editor’s perspective, several significant things took place this year.  Senior leadership from Airbus and Siemens presented talks affirming their companies’ commitment to making progress in electric aviation, with future plans to develop two and four-seat aircraft for European and American markets from Airbus, and to produce a range of light-weight, commercially-available motors from Siemens.

Siemens has 343,000 employees worldwide and revenues of 101.2 billion euros, or $111 billion U. S. dollars.  Airbus, During the 2014 Farnborough Air Show, won US$75.3 billion worth of business for a total of 496 aircraft, making it by far the largest Farnborough show for Airbus – both in terms of dollar value and also in the number aircraft.  Airbus has around 63,000 employees.

That these mega-corporations are willing to present in Santa Rosa, California to a Symposium organized by a non-profit organization makes CAFE intensely aware of the growing world-wide interest in electric aviation, and proud to be a part of that burgeoning momentum. 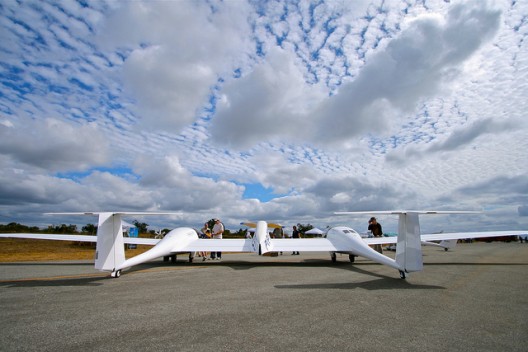 Pipistrel’s Taurus G4, winner of GFC I. We hope for many more Challenges and even greater progress.

CAFE might be seen as the “Woodstock of Aviation,” over the last 35 years through its focus on “garage-band” levels of technology that were simple and available to home craftsmen.  These craftsmen took a scientific approach to improving the often mediocre aerodynamics of commercially available light aircraft, or designed and built their own aircraft in the pursuit of ultimate efficiency.  CAFE organized races at Oshkosh, and perfected precise test methods for measuring true aircraft performance.  The resulting performance and economy improvements drew leaders in General Aviation to collaborate with CAFE and culminated in 2011’s Green Flight Challenge.  That event featured the largest prize in aeronautical history, won by Pipistrel with their Taurus G4, closely followed by Stuttgart University’s e-Genius.  That event brought together the quietest airplane on record and the two most efficient. Both of which won prizes for their designers.

We may see a new “Age of Aeronautical Enlightenment” grow from these high-level acknowledgements, with those skilled in aerodynamics and electric power creating new and efficient vehicles spanning everything from ultralights to massive cargo haulers.  The fact that many innovations are coming from Europe might provoke some friendly competitive interest from Boeing, Northrop, GE and Lockheed, the first three of whom had representatives at EAS IX.  The world is waking up to electric aviation, with attendees from Norway, Italy, Germany, Spain, Canada, Japan, Brazil, Slovenia, India and France taking in the wealth of information presented this year.

The CAFE Foundation and its devoted board members put on a good show this year, and look forward to going even bigger and better with future Symposiums and Challenges.  Good things are on their way.