Displayed this week at the Geneva Auto Show, Goodyear’s new AERO wheel is not just rolling stock, but a possible aeronautical device that could propel a “flying car” skyward.  Not only could it roll along the freeway, it could navigate the vehicle and choose whether to be in highway or aerial mode.  These smart tires could have some problems, though, that could negate their aerial potential, according to some critics.

Goodyear’s press release extols the possible virtues of the forward-thinking product: “GENEVA, March 5, 2019 /PRNewswire/ — The Goodyear AERO concept is a two-in-one tire designed for the autonomous, flying cars of the future. This concept would work both as a tire for driving on the road and a ‘propeller’ for flying through the sky.”

Chris Hensel, Goodyear’s Chief Technology Officer, explains: “For over 120 years Goodyear has obsessively pursued innovations and inventions, partnering with the pioneers driving change and discovery in transport.  With mobility companies looking to the sky for the answer to the challenges of urban transport and congestion, our work on advanced tire architectures and materials led us to imagine a wheel that could serve both as a traditional tire on the road and as a propulsion system in the sky.”

Its multimodal design would enable the wheel to serve as a road-based drive train, absorbing forces from the road in a vertical orientation and act as a lifting propulsor in horizontal orientation.

Its non-pneumatic structure’s spokes would provide support as a wheel and act as fan blades when the tire is tilted.  This would require an ability to support the vehicle’s weight in several planes and absorb shocks when on the road.

Goodyear says the wheel would be driven by magnetic propulsion, presumably like a hub motor.

The AERO would use light-based, fiber optic sensors to monitor road conditions, tire wear and the structural integrity of the tire itself.

This is the first smart wheel your editor has encountered, the AERO wheel featuring an embedded artificial intelligence processor that would use data from the vehicle’s on-board sensors and from external vehicle-to-vehicle and vehicle-to-infrastructure communication.  The A.I. processor would select routes and choose whether the vehicle would roll or fly – a no-brainer for most pilots. 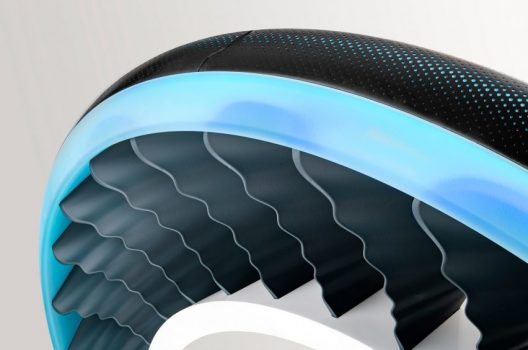 Serrated rims might reduce noise from fast-spinning wheel/rotor. Will these be the loudest things on the road or in the sky?

Goodyear’s Helsel concludes,  “Goodyear’s concepts are meant to trigger a debate on the tires and transport technologies for a new mobility ecosystem.”

And that seems to have occurred, some fairly controversial views surfacing in the wake of the announcement.  Autoblog noted the similarity of Goodyear’s vision to the film Elysium, with the least among us living in, ”An above-ground landfill filled with grimy famine and high-tech, or [the well off in] a cyber-Bambi Shangri-La drowning in sunshine, leisure time, and ribbons of glass road.”

Autoblog notes the technical cleverness of the design and concludes, “Bring on Elysium already.”  How this level of luxury will be made available to all is probably a moot question.  Economists suggest we might all have to settle for a little less for everyone to have enough – but in the current political atmosphere, that might smack of socialism and not economic reality.

Anderson questions the slick transition from ground to aerial transport.   “’The downwash from the fast-spinning tire in flight mode might damage things below and possibly cause ‘horrific’ noise levels,” Anderson added. And he questioned why travelers would want to drive at all when they could fly. ‘I would just fly to where I wanted to park,’ he said.”

He is countered by Ella Atkins, a professor of aerospace engineering at the University of Michigan.  “In an email to NBC News MACH, she called the tire ‘innovative,’ adding, ‘It would be great to use the same transmission to turn the thrust-generating blades in flight mode that turns the rolling wheels in car mode.’”

She did question the use of solid rubber tires, which reminded her of “the early days of automobiles.”  She asked, “How safe and efficient can a car be with ‘Model T tires’ in car mode even with 21st Century sensors and electronics?”

NBC explains that the AERO is not Goodyear’s first foray into radical tire design.
In recent years the company has developed concepts for an electricity-generating tire and a spherical tire capable of rolling in all directions.

Whether the AERO of other Goodyear designs end up driving us or flying us to our future destinations remains to be seen.  Innovations usually come hard, but we encourage them for making us break from the obvious and hackneyed.