Graphene 3D Lab, Inc. has demonstrated that graphene can be easily mixed with thermoplastics commonly used in fused deposition modeling (FDM) 3D printers. The company has demonstrated a mixture of plastics and graphene that can be turned into nanocomposite material filament which can then be used within any standard FDM 3D printer.  They have managed to craft a functioning battery which may be incorporated into a 3D printed object during printing. These filaments show good thermal and electrical conductivity and are shown in the video forming a 3D printed battery.

Different components require separate “printings” at present, but company CEO Dr. Daniel Stolyarov explains that future iterations of the process will be able to simultaneously produce multiple material parts.  His corporate biography lists significant accomplishments. “In his previous role at Energetiq, Dr. Stolyarov and his team won the 2011 Prism Award for the Laser-Driven Light Source they developed. He has also co-authored papers with Nobel and Kavli prize winners, as well as members of the National Academy of Sciences.”  Others in the firm seem equally well qualified. 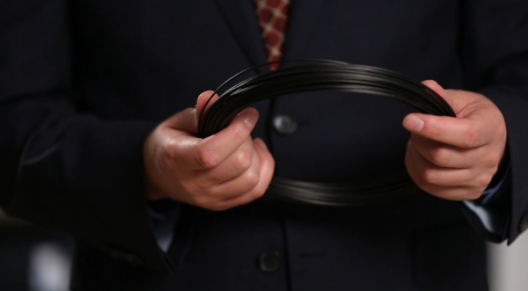 The electrolyte as shown in this demonstration project is apparently solid, potentially less prone to thermal runaways and flammability than liquid equivalents.  Even at that, the demonstration battery produces as much voltage as a typical AA cell.  Since the filaments used for printing can be modified to meet functional needs, the Lab’s technology could allow manufacture of complete products, with electrical and structural qualities tuned to the product’s application.  Graphene 3D Labs explains, “Being added to polymers in the form of nanoplatelets, graphene affects materials in extraordinary ways. After the addition of graphene, materials then share many of the phenomenal properties of the graphene itself. They become mechanically strong and their thermal and electrical conductivity are greatly improved.” 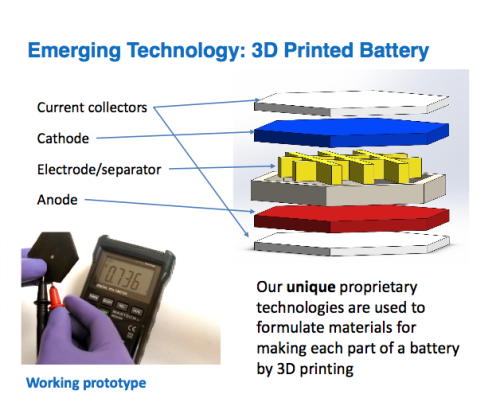 Components are now printed individually, but will be created in single sweep in upcoming  process

The company explains the use of FDM technology.  “Fused Deposition Modeling is a 3D printing technology based on heating up plastic polymers and depositing them layer-by-layer through an extruder to create a physical object. It is also the most widely used method of 3D printing and the method which our current technology is based on. FDM printers have been used in a variety of disruptive ways, including: 3D printed end use parts for NASA’s Mars Rover, sporting goods, and medical devices. FDM 3D printing has even been used to create affordable prosthetics and an exoskeleton to assist the disabled.”  The idea of a self-powered prosthetic has a certain interest here, with other applications including self-powered electric vehicle parts.

Dr. Emil Greenhalgh at Imperial College London and Volvo in Sweden have been working on structural batteries for several years.  Dr. Stolyarov and his associates may be closing in on how to manufacture such components rapidly and inexpensively.  With your own FDM printer (among the most common “maker” type home systems) you may even be able to try this at home.