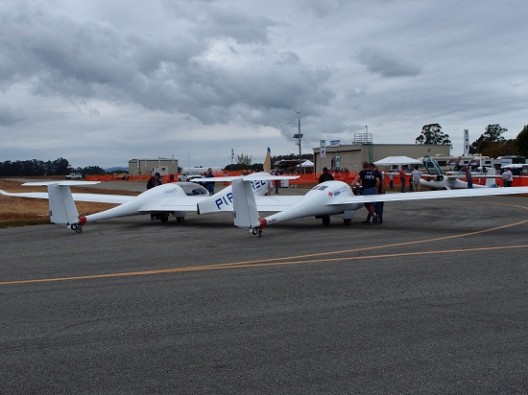 Sunday, September 25 marked the kickoff of the Green Flight Challenge sponsored by Google, a NASA Centennial Challenge managed by the CAFE Foundation, with a thorough technical inspection for each entrant, followed by a weigh-in.  Held at the Charles M. Schulz Sonoma County Airport, the event is an event of international importance, despite the small turnout.

With only four entrants making an appearance out of the original 13 that had announced and made it through the rigorous design review, there might be cause for disappointment. Consider, though, the Berblinger competition held in April at the Aero Expo in Friedrichshafen, Germany. 36 teams signed up, 24 made it to the Expo, 13 started the course and eight finished. The GFC has a comparable start-finish ratio, with many of the same issues stalling non-starters here as in Germany: lack of funds  and schedule, regulation and fabrication difficulties.

Despite the dropouts, Pipistrel, Stuttgart University, Phoenix Aircraft, and Embry Riddle Aeronautical University (ERAU) managed to field teams. In a serious blow, Embry Riddle’s team was disqualified, having failed to mount a ballistic parachute which they had carried in their drive from Florida (they simply ran out of time before the technical inspection), and lacking a second pilot to fill their Eco-Eagle’s second seat. The latter issue was an irreconcilable one between CAFE’s rules and the University’s. Embry Riddle would not allow a second pilot in an experimental craft, while CAFE required both seats to be filled. 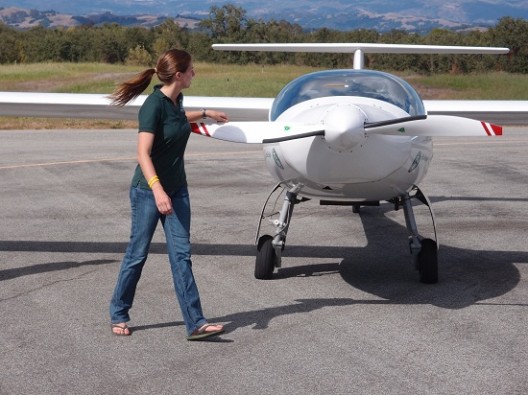 Jack Langelann, Aeronautics professor at Pennsylvania State University and leader for the Pipistrel G4 team, made a plea for sportmanship in allowing the Embry Riddle group to at least fly on a demonstration basis, although they would not be a part of the official competition. The CAFE board approved this motion and the ERAU Stemme acquitted itself well in the next few days’ tasks.

As the teams arrived, with Embry Riddle coming in just before the 2:00 p.m. deadline, each was escorted to a secure parking area on either side of the CAFE hangar, in which the all-important and highly-precise scales reside. Aircraft were under guard at all times while on the ground to prevent any inadventent damage or unintentional alterations.  Mike Fenn, a CAFE board member, oversaw movement of the aircraft and assigned escorts for aircraft while they were moved to and from the weighing hangar, and for team members entering or departing the secure area. Transportation Security Agency (TSA) members also monitored the area for any interlopers.

Technical inspections, under the direction of Kevin Quirk, an EAA Chapter 124 volunteer, include ensuring the aircrafts’ safety and airworthiness and making sure USB ports for the CAFE-supplied data loggers are in place and functional. Such loggers connected to netbooks carried in each plane allow Challenge officials real-time monitoring of flight paths, speeds and altitudes for competitors, and are essential for resolving any later scoring conflicts.

Once an airplane passed tech inspection, it was taken to the scales for an initial weigh-in under the watchful eye of Wayne Cook. Weighing was to be performed pre- and post-flight, allowing officials to determine fuel use on more traditional craft. The extreme size of most entrants, with the Phoenix motorglider the smallest entry, made dismantling and re-assembling each craft for each weighing a bit time consuming and might have led to schedule delays, even with the reduced number in the field. 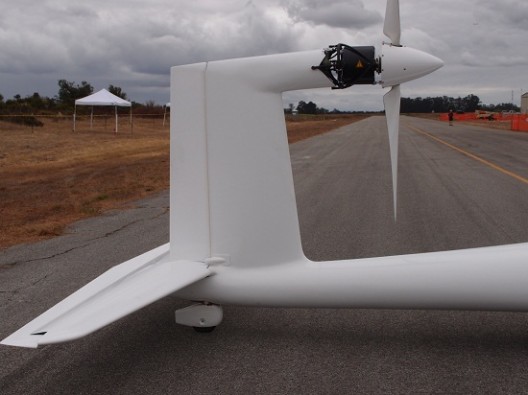 CAFE streamlined the process, weighing only the pilots of each airplane and their gear before and after the Tuesday “economy run,” and removing and weighing the fuel in the Rotax-powered birds before and after each flight. Pipistrel’s group was extremely well prepared for this requirement, having fabricated a series of metal frames that allowed the two-fuselage G4 to be mounted securely on the CAFE scales. No journalist or blogger was allowed inside for this part of the procedure, since the scales are highly sensitive to air movement. Once the big hangar doors roll down, all inside must be still.

Only the Phoenix motorglider was weighed before activities closed on Monday evening. Monday morning, the other three aircraft were weighed and rolled back into the impoundment area, ready for the first part of the flight competition. The next chapter will unfold shortly.