As if in answer to the most fervent prayers by CAFE Foundation organizers, Tuesday, September 27 dawned as a bright, windless morning, perfect for the planned 200 -mile aerial trek that each of four teams would undertake in the Green Flight Challenge sponsored by Google.

Each would fly a large, tightly-followed out-and-return loop around the Sonoma Valley, reaching the radio tower array on the peaks north of Geyserville, then returning for one of three passes (the fourth being the descent to land) over the CAFE Foundation hangar at the west end of the Charles M. Schulz Sonoma County Airport.  Each would have to reach at least 4,000 feet at the end of a 17-mile climb and would need to track within one mile on either side of the Challenge course’s centerline.  Pilots would need to stay on the outside edge of turnpoints, but shave their margin to within one-half mile on each pylon-type turn.

To help monitor that precise flying, Steve Smith, CAFE board member and data and timing chief, was assisted by James Murray and Jonathan Barraclough, both electronics experts from NASA Ames Flight Research Center. Each airplane carried a netbook connected to an onboard datalogger which recorded the flight profile for downloading to the CAFE totalizers that would assess energy use and compare different planes in term of total kilowatt-hours of energy consumed. 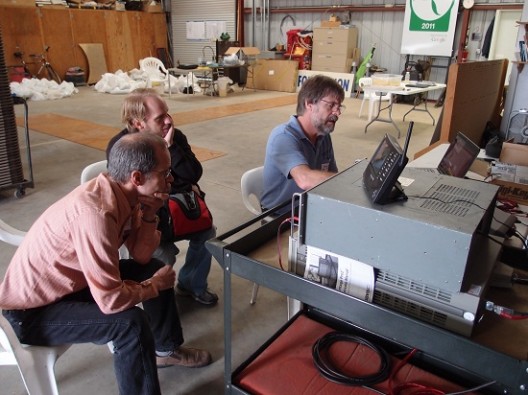 To verify takeoff weights, removeable components (such as pilots and their gear) were weighed Tuesday morning prior to takeoff, since there could have been changes between the Monday takeoff and climb competition and the morning of the Green Flight Challenge. This approach avoided the long and somewhat cumbersome weighing of the entire airplane. Since wingspans for all competitors exceeded the width of the CAFE hangar’s doors, some disassembly was required for each weighing, and as noted before, Pipistrel had a complex array of metal platforms to help mount their twin fuselage craft on the scales.

Tuesday morning, each competitor was towed to a hold position just short of runway 19. Because the Eco-Eagle was not competing, it was sent out first, with the assumption that faster craft would overtake it. Phoenix departed second, with Pipistrel and e-Genius following in order. Launches were about every 10 minutes, with each airplane towed to the hold point by a golf cart, tip-runners attending to keeping things straight and damage free. Pipistrel’s right cockpit, viewed from the pilots’ perspective, did not have a retaining mechanism, so two crew members walking at a stately pace before the airplane, carried it with some pomp and set it in place when it came time to launch. 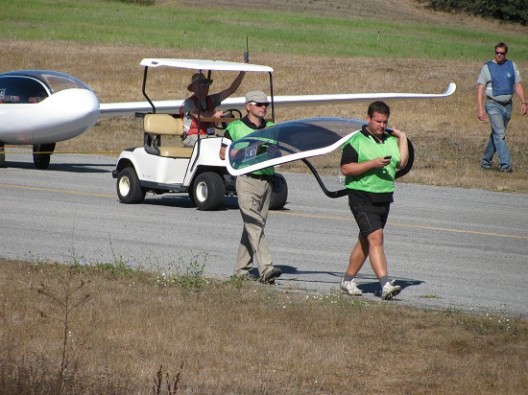 Canopy bearers head the march to the start line

The media, driven to the junction of the taxiway and runway 19, happily crowded each airplane as its pilot or pilots awaited their run. As the background airport traffic cleared the area, a pilot would start his engine or motor, taxi to the top of the runway’s number “9”, then respond to the big green flag dropped on the count of three by Mike Fenn, CAFE board member and hangar boss for the contest.

For spectators, there really wasn’t much to see other than the takeoffs of these spectacular airplanes, followed by two hours of waiting, during which each competitor flew over the airport four times, at at least 4,000-foot altitude, and finally landed after a low pass over the CAFE hangar. But the tension and real drama of looking for position changes occupied the teams and their enthusiasts, while the actual challenge of navigating the course and practicing the most precise flying skills was only experienced first-hand by the pilots.

Because this is an efficiency contest, and every ounce of drag leads to a lower score, pilots closed their vents despite the brilliant sun heating their cockpits to sauna-like temperatures.  Jeff Shingleton reported that he and pilot Jim Lee on the Phoenix Air team lost two pounds each on their flights, even though they consumed 12-ounce bottles of water during the ordeal and opened vents during their climbs. 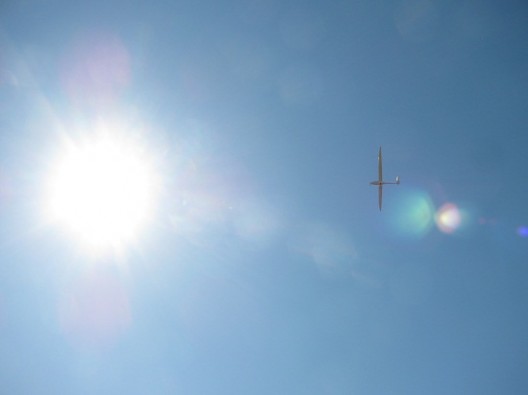 To make sure teams follow the rules, a tight security net is kept on the field, with various soft barriers showing allowable and non-allowable areas. Anyone not on the various aircraft teams or part of the CAFE organizers must be escorted by a chaperone. At all times, access to airplanes is limited to only those who need to be there. After a plane sets down following a competition flight, only four team members can help escort it to the weighing hangar and to its impoundment area.
e-Genius was first to land, after a descending pass over the CAFE hangar, followed by Pipistrel, Eco-Eagle, and after a very long pause, Phoenix. Each plane was escorted back to its impound position and pilots and their gear were weighed. In the case of fuel-burning aircraft, remaining fuel was sucked from the tanks and weighed, then replaced in the craft.

Again, all aircraft were kept under guard overnight and through the next day. CAFE officials downloaded their data and have kept everything mum for all contests.

Thursday, the ceremonial parade took place on the way to the hold point for runway 19, and CAFE organizers tried for a quicker pace, wanting a five-minute gap between  launches. Timing was quicker than on Tuesday, but did not quite achieve the desired rate. Phoenix was away first, with Jim Lee holding the airplane down to the last few yards of runway, then pulling up into a knife-edge climbing turn that drew cheers from the crowd. e-Genius stayed low, but stayed on a conservative climb path away from the airport.

Pipistrel’s G4 went third, making a normal-appearing takeoff and climb. Embry Riddle’s entry seemed to be followed by a large crowd of well-wishers and supporters, and Mikhael Ponso executed a nice lift-off and climb to the north.

One thing remained, the final weigh-in of pilots and gear and fuel remaining in the petrol-powered aircraft. For the electric craft, a battery rundown test showed that e-Genius and the G4 had a half-hour’s reserve capacity, as required by the rules. Each was run at half-throttle for an hour to determine whether this requirement was met. Each met that goal and the G4 was run well beyond the hour as a final indication that the airplane could have gone considerably farther than the Challenge course.

Nobody, other than the keepers of the totalizers perhaps, gets to know what has happened until the awards ceremony at the NASA Ames Research Center on Monday at the Green Flight Expo at NASA Ames Research Center at Moffett Field in Mountain View, California. There, 20 exhibitors will show advanced aircraft and associated equipment, and Google will hand out prizes, if there is a winner. A new and tantalizing period of waiting begins.