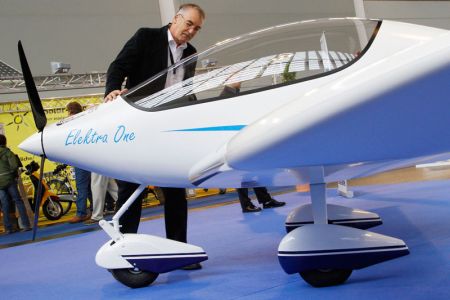 Calin Gologan with Elektra One

Over the last two years, PC-Aero has designed a series of light, electric-powered aircraft.  As Gologan explains, “Using the existent technology it is possible to fly with a one- and a two-seat aircraft without CO2-emission for more than 3 hours, without noise and for lower operation costs in comparison with classic aircrafts. This is the future of leisure aviation as a bridge to the next step: electric transportation.” 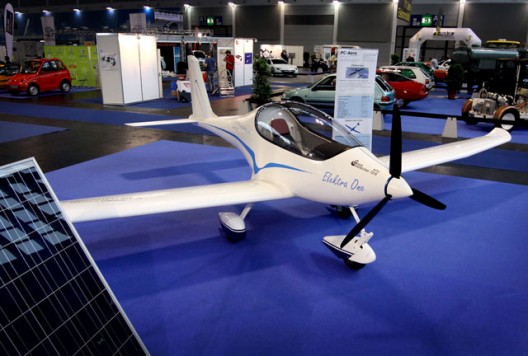 Elektra One shines on the Avenue of Electric Mobility

Just two months after its debut at Aero 2010, Elektra One graced the halls again as part of “The Electric Avenue”.  Surrounded by electric vehicles of every description, the single seater showed off its nicely faired landing gear, and hinted at the powerplant under its smooth cowling – an HPD 13.5 kilowatt (18.4 horsepower) motor normally associated with hang gliders and powered parachutes.  PC-Aero notes 21 hp in its specifications, indicating that the team will drive the motor a bit harder for short periods (but within motor specifications) to achieve takeoff run and climb goals for the Green Flight Challenge.

Team PC-Aero, led by former NASA test pilot Einar Enevoldson, will compete with Elektra One for the $1.5 million prize in the NASA/CAFE Green Flight Challenge next July at Charles M. Schulz Memorial Airport in Santa Rosa, California.  Gologan calculates that if 33.7-kilowatt hours (kWh) equal the energy in one gallon of avgas, a single seat aircraft would have to achieve the equivalent of less than half a gallon per hour at 100 miles per hour to even be in the contest.

According to Gologan, “Elektra One needs only about 6.5 kW/h at 100 mph.  This will be equivalent [to] about 500 passenger miles per gallon…. The reason for the much better electric version performance is the electric engine efficiency (about 95 percent) which is much higher than the efficiency of a normal combustion engine.”  That, coupled with the airplane’s clean lines and light weight, could make it a formidable GFC competitor.