Stemme’s Green Speed Cup, a speed and economy run that was to have sped over six days, ended on the fifth, with all five Stemmes still competing, but with a big break between the top three and the bottom five. 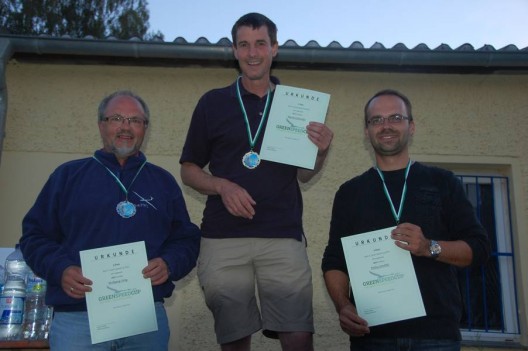 Stemme’s web site explains the deletion of the sixth event.  “The final race of the 2012 GREEN SPEED CUP was a task of 246 km north of Berlin. Although the weather forecasts looked good this morning, the actual weather didn’t match the expectations. Thus the teams compared their powered flight capabilities as the weather didn’t offer too many possibilities for optimization.”

Day five was a cat’s cradle of crossing triangles that added up to 248.2 kilometers (153.88 miles) and was won by Markus Scherdel in his S10VT at a speed of 143.2 kilometers per hour (88.78 mph) while burning 4.4 liters per 100 kilometers (53.46 mpg).  This was not a best speed or most economical flight for the event, but overall performance for all competitors was remarkable for the ability of these large motorgliders to reach good cross-country speeds on low power with low fuel consumption.

The contest was a close one between Markus Scherdel and Wolfgang Uhlig, with only 86 points separating their overall results at the end – very close out of a possible 5,000 points for the five races.

We regret that the Arcus E did not compete and the SD-1 had to be pulled from the race before it began.  Other teams need to start planning for next year to give the Stemmes a run for their money.