Robert Adam helps run the Green Speed Cup, a time, speed and economy run for aircraft in Germany.  The rules for this year’s contest elucidate the intent and ambitions for the event: “The GREEN SPEED CUP is an aviation competition focusing on efficient flight. The emphasis lies on fast and energy saving transportation. The competition is meant to develop new methods to reduce energy consumption of motor driven aircraft using external energy sources like lateral winds and updrafts. In making the ability of certain aircraft and techniques transparent, the competition shall set new standards in general aviation.” 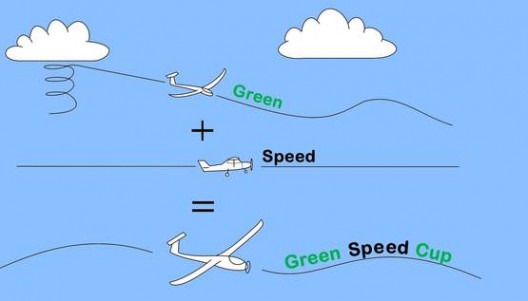 Combining speed with efficiency, the Green Speed Cup attempts to meld different flight styles for highest performance in both realms

The Cup provides a sounding board for discussion of energy efficient flight and the changing experience of flying while exploring new techniques and technologies.  Hosted by STEMME Aviators e.V., the contest is open to “all aircraft capable of taking off under their own power,” with the following restrictions:

In the Electric Class, airplanes may have one to four seats, weigh up to 2,700 kilograms (5,950 pounds) and be capable of covering a maximum distance of 400 kilometers (216 nautical miles).

Aircraft in the Combustion Class may have piston or turbine engines, one to four seats, and weigh up to 2,700 kg (5.950 pounds).

All aircraft are required to have a properly operating Global Network Navigator Service (GNNS) receiver with a data-logging function.  Pilots turn in the recording medium (such as a memory stick or smart card) at the end of each task.  Tasks are primarily speed runs, with scoring based on the speed in kilometers per hour times a “seat coefficient” (0.9 for a single seater, 1.0 for two seats, and 1.2 for four seats) and that product divided by the craft’s energy consumption in kilowatts per hour.  All flights are made from Strausberg, giving Stemme an apparent home-field advantage, but not necessarily a run of victories.

Daily tasks take place between 500 and 3,000 feet above ground level, with penalties for dropping below that except for takeoffs and landings.

This year’s competition included a training day, which heightened anticipation of a good contest between “significantly different” aircraft.  That was dampened, however, by heavy rains on Sunday and Monday, costing valuable time and causing several competitors to bow out.

Friday, June 27th’s training day allowed the Ventus cM flown by Frank Bormann and the Stemme S6-RT piloted by Ralf Thormann and Phillip Scheffel to show off their extremely high efficiencies.  Because it was a good soaring day, both aircraft used cloud streets to partially float, engine off, around the 350 kilometer (217 mile) course.  The winning Stemme managed an average speed of 163 kilometers per hour (101.6 mph) while consuming only 6.1 liters per 100 kilometers (38.55 mpg) of avgas, or 77 passenger miles per gallon.  Admirable as that is, one can lament that the 400 pmpg e-Genius or Calin Gologan’s Elektra One were not on hand to show what electric aircraft can do. 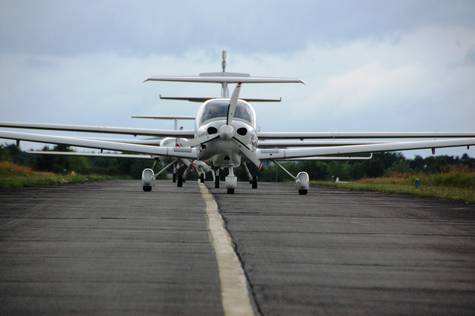 The first official competition day saw four competitors facing off, with “weather conditions… much better than expected.”  During the second half of the 280 kilometer (173.6 mile) course Frank Bormann cut his Ventus’ engine to manage an overall 2.8 liters per 100 kilometers (84 mpg).  Organizers reported by “very happy” with the tactic, since “it represents a strategy of combining soaring including circling with using the engine.” 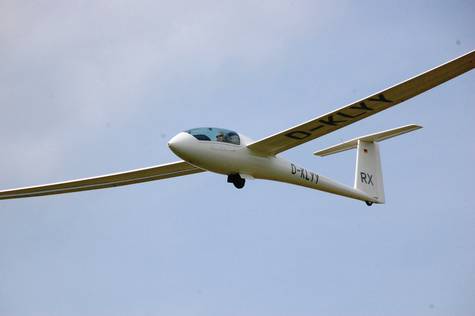 Ventus achieved great efficiency and economy, but not high speeds

In second place The DA-40 TDi flew slightly below cloud base and used thermals to help speed along on minimum power.  Robert Adam explains that the Davis seems like a “good concept in terms of cruise efficiency, an efficient diesel engine coupled with an efficient airframe.”

Third and fourth places went to a Taifun 17E and a Stemme S15, both of which used tactics similar to those of the DA-40.  You can see pictures of all the competition machines here.

The second competition day’s windy, showery weather forced a task of only 215 kilometers (133.3 miles).  Because of the lack of thermals, the David DA-40 TDi flown by Daniel Hirt and Markus Becker simply cruised at 194.1 kilometers per hour (120.3 mph), taking the win for the day.  The Ventus topped everyone for fuel consumption, though, burning only 5.5 liters per 100 kilometers (42.76 mpg) but at only 95 kilometers per hour (58.9 mph).

Robert Adam explains that even the shortened competition with fewer than expected entrants has an upside.  “Together with the training day the GSC-Team could collect a big set of flight data to improve the theories of efficient flying.”

“The winner of the GSC 2014 is the DA-40TDI. Its Diesel-Engine [proving] that it is able to handle those low power settings needed to reduce the fuel-consumption below 8-9l / 100km. Daniel Hirt tested a new mapping of the FADEC-Controlled injection engine, to reduce the energy consumption even more than in the last years. Obviously he made a good job. The DA-40TDI flies still with around 105kts (120.75 mph) at this minimum-power-setting.

“The 2nd place took the Ventus and its Pilot Frank Bormann.  The Ventus was able to compensate the low engine performance with the excellent gliding performance. The points on the first competition day were enough to reach the high total scoring. 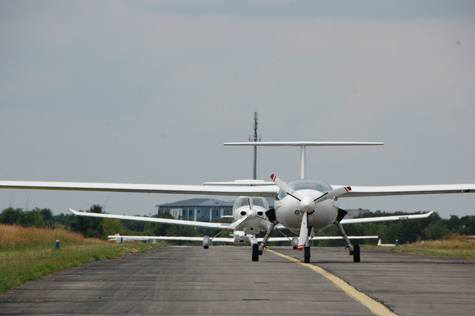 Stemme’s S6-RT did well for both speed and efficiency, finished third overall

Congratulations to all who managed through the less than ideal conditions and still achieved real-world excellence in flight performance.  We join the GSC organizers in looking forward to next year’s contest, especially with a contingent of electric aircraft in contention.