The Green Speed Cup is a closed circuit race similar to the Green Flight Challenge, but with a more free-style approach to how each team flies the course. As reported yesterday, the first day’s competition was won by Markus Scherdel, test pilot for Solar Impulse. 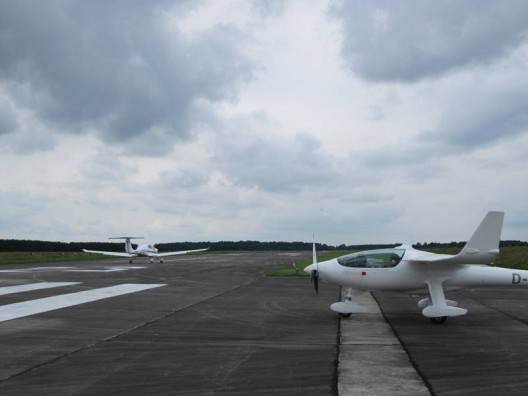 A longer event than day one, the task required pilots to fly from Strausberg down the longest leg of a scalene triangle to Klix, a village in Saxony. From there, they turned northwest to Finsterw Heinri and then sped north back to Strausberg to complete the 326.4 kilometer (202.4 mile) course. 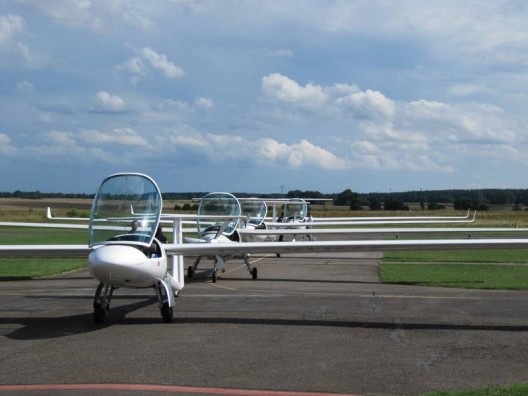 Stemmes line up for a speed run around a triangular course

Aside from the four-seater and the Arcus two-seat electric motorglider, all competitors are either Stemme S10VTs or S6Ts. The Arcus did not start on day one, did start on day two, but weather conditions both days kept it from exploiting any thermals. Its battery allows it to climb to about 2,000 meters (6,500 feet), from where it can glide 100 kilometers (62 miles) – not enough to manage the entire course. We can hope that the clouds lift in the next few days. 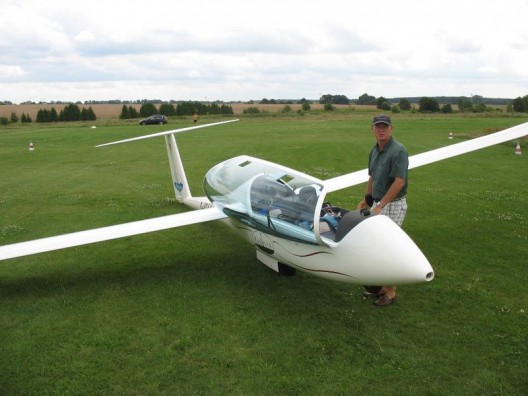 Cloudy skies ruined the day again for the electric Arcus

Worse for the SD-1 team, the aircraft was grounded by German authorities, so could not compete (or even fly) at all. Organizers had “anticipated big potential” from this small single seater, which is powered by a Briggs & Stratton V-twin or a Czech-built JVC-360 (cc) engine, each capable of pulling the little airplane around at about 100 mph on under two gallons per hour. Several European companies are developing “light” ultralights and enough engines now exist to make this an interesting (and affordable) market segment.  Single seat electric versions of these craft would be economy winners.

With Wolgang Uhlig now in first and Markus Scherdel in second place overall, a big change in the lowering skies could bring big changes in the leader board.