Tina Casey, writing in Clean Technica, reflects on the coming changes in the “gasmobile” to EV ratio.  “Somewhere in the outer reaches of talk radio, a ghost stalks the halls, mumbling of light bulbs and plastic bags and electric cars that won’t start in cold weather. Meanwhile, most automakers are not waiting around for the other shoe to drop. They have finally begun pivoting into the sparkling green world of zero emission personal mobility, even those once wedded to the idea of ‘clean diesel,’ and a new battery formula is here to help.” 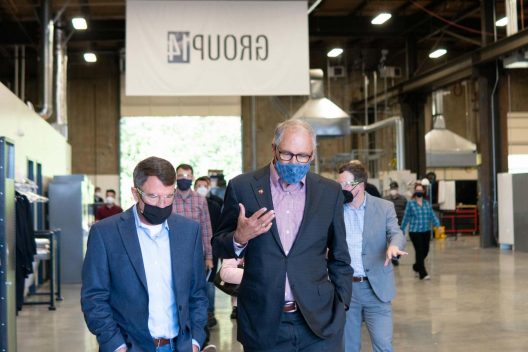 Her article, “Game Over For Gasmobiles: Electric Vehicle Batteries Just Keep On Getting Better,” describes efforts at Group 14, the second of two electric vehicle firms recently visited by Washington Governor Jay Inslee.  The first was Eviation, based in Arlington.

Group 14 is reputedly, “The largest manufacturer of lithium-silicon battery materials,” capable of producing 120 tons per year of SCC55™, its patented battery anode material.  SCC55, according to Group 14, is composed of silicon, carbide, and cleverly arranged spaces.

Under the heading, “Graphite has met its match,” Group 14 tells us, “SCC55™ has five times the capacity and affords up to 50 [percent] more energy density than conventional graphite for Lithium battery anodes. Its unique hard carbon-based scaffolding keeps silicon in the most ideal form – amorphous, nano-sized, and carbon-encased. The result is the best-in-class anode material that exhibits outstanding first cycle efficiency and long life upon Li-ion battery cycling.”

Scaffolding seems important in terms of encasing the silicon, which can expand up to 300-percent when being charged, and drop back to its original size when being discharged.  This constant flexing eventually breaks down the internal battery structure and leads to failures.

Group 14 makes the scaffold and amorphous silicon through two of its own trademarked processes.  Dryolisis™ combines dry polymerization with thermal processing in a solvent free environment to make, “The perfect carbon scaffold.”

Siligenisis™ uses a “non-exotic precursor that converts into silicon within the porous carbon scaffold.”  The amorphous (shapeless) silicon can expand and contract within the constraints of the holes in the scaffolding while reacting with the lithium without damaging the battery.

Partners in multiple fields will lead to expanded use of the patented technology.  Group 14 promotes their batteries’ use in electric vehicles, consumer electronics, medical devices, and fortuitously, the aerospace industry.

Group 14’s largest partner may be the Geely Group in China, which owns Volvo and Polestar and their offshoot Lynk.  Geely also owns Lotus, the English Formula 1 and sports car giant, and Malaysian car maker Proton.  The Evija by Lotus is a $2.4 million, 2,000 horsepower hypercar, while Proton tends to be a little more laggard in their 21st century leap, not yet fielding an affordable electric car in their native country.

What this does is make a large base for Group 14’s batteries – all under one corporate tent.

With a shape said to be based on the Tiger Shark, Terrafugia’s TF-2A is a multi-rotor eVTOL (electric Vertical Take Off and Landing) craft helmed by one pilot and carrying two passengers.  Small compared to the Uber concepts designed four years ago, the TF-2A weighs 2,646 pounds at maximum takeoff weight, and travels up to 62 miles at a cruising speed of 112 miles.  It’s not known whether Group 14 batteries will power this machine, but it’s a Geely product. 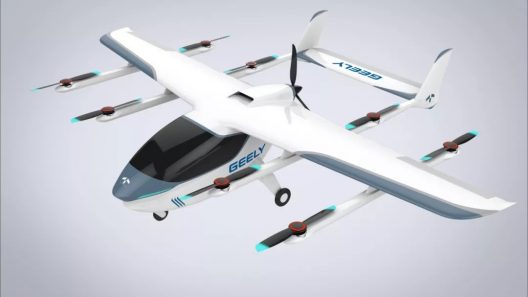 Geely Terrafugia TF-2A carries two passengers, one pilot (for now). It gets pulled aloft by eight rotors and pushed along by one propeller

Geely also has ownership of London EV, which supplants the traditional London Diesel taxi with an electrified version, and the Geometry all-electric car company in China.  Their newest vehicle is a compact hatchback selling for around 7,900 euros (in China).  That would indicate costs for batteries for the C are able to help meet that price point. The car’s range, depending on battery pack size can be 400 kilometers to 550 km. (248 to 341 miles).  This is in a car roughly equivalent to a Nissan Leaf.

Powermag.com reports, “In cells built and tested by Farasis utilizing Group14’s flagship silicon-carbon anode material SCC55™, the company has achieved an increase in energy density that would enable them to reach 330 Wh/kg in typical automotive cells with more than 1000 charge-discharge cycles. The battery EV cell will have a volumetric energy density of 750 Wh/l.”  Farasis is one user of Group 14 technology, and Mercedes backs Farasis.   Rick Leubbe, CEO of Group 14, says, “People talk about what might be available in 2026 or 2027.  This is a today technology that Farasis has validated works right now. ”

A further partnership with Slovakian firm Inobat will custom manufacture high energy density batteries for a variety of applications.  Marian Bocek, CEO and Co-Founder of InoBat. explains, “With automotive, commercial and aviation customers including Czech bus manufacturer SOR, InoBat creates high-margin EV batteries customizable in different cell formats such as pouch or cylindrical — both with faster development timelines than the industry norm.”  “Our goal is to contribute to the global electrification efforts. Partnering with Group14 will enable us to bring advanced energy solutions across the whole battery value chain for a variety of markets.”

Leubbe continued, ” “We’ll see these in cells in electric vehicles by 2023, but we expect to be in the majority of EV battery cells by 2025.”  With far-flung partners in an array of markets, this prediction could well be on its way to fulfillment.

Silicon and carbon combined into high-power anode material.  Group[ 14 is partnering with SK Materials to build a plant in South Korea to increase production capacity for SCC55.  Other investors have poured $18 million into Group 14’s ventures

Group 14’s demonstrated 330 Watt-hour per kilowatt energy density at the cell level should make their batteries attractive in today’s market.  With their ability to incorporate their anode material in existing manufacturing plants, rapid adaptation should pose few problems.

It will be interesting to see if Geely choose the existing battery products or variations based on the SCC55 technology, but things seem promising for Group 14.