H3X is shaking things up with its announcement of  its HPDM-3000, a three megawatt motor.

Thirteen years ago, your editor gave his first presentation at an electric aircraft symposium, held that year in the Hiller Aviation Museum in San Carlos, California.  Dr. Brien Seeley, founder and then head of the CAFE (Comparative Aircraft Flight Efficiency) Foundation, had asked for research on motors of 100 kilowatts or more.  It was hard to find units of over 50 kW at that time, but people like Roman Susnik were managing ultralight motors of over 100 kW for motorized sailplanes

With competitors like MagniX and ZeroAvia in the game, H3X introduces the HPDM-3000, a 2.8 mW (3,753 horsepower) ultra-high power density integrated modular motor drive (IMMD).  Developed by a group of young graduates of the University of Wisconsin at Madison, H3X’s motors combine extreme lightness for the power produced with cutting edge manufacturing techniques.  In this video, Chief Technology Officer Max Liben explains the approach his team took in creating their motors.

H3X’s earlier motor, the HPDM-250, puts out 250 kW (335 horsepower) from a mere 16 kilograms (35.2 pounds) – 15.625 kilowatts per kilogram.  Adding cabling and ancillary units, H3X counts that as 12 kilowatts per kilogram, still three times the power density of most competitors.  The HPDM-3000 weighs approximately 220 kilograms (484 pounds), according to the company, exceeding that weight-to-power ratio at 12.7 kW per kg.

Several factors help achieve these numbers.  H3X provides a white paper detailing them.  They include:

·         “Structural cold plates that synergistically cool the windings and inverter

The motor/inverter is an integrated unit which comes about partly from additive manufacturing.  H3X claims inherent fault tolerance, an ability to run without a gearbox with resulting low propeller speeds, and redundancy from 12 independent drive sectors. 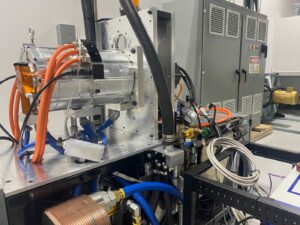 Failures in any of the drive sectors will allow the motor to continue operation at only a small reduction in power. Individual motors can be stacked to provide up to six independent power units and 18 megawatts of power.  Stacking increases reliability, with six units providing 72 independent systems for a high level of fault tolerance.

The “structural cold plates” include integral cooling channels through which liquid coolant will flow to maintain thermal levels in the motor and inverter.  Each sector’s cooling system is independent of other sectors’, providing one more level of fault tolerance.

Jason Sylvestre, Co-Founder and CEO of H3X, thinks the motor will meet the needs of a growing regional airline market.  Airframers need high power density aviation-grade systems in the [Mega-Watt]-class to electrify their aircraft and those currently don’t exist. This Electric Propulsion Unit (EPU) will serve a critical unmet need in the supply chain and trigger an acceleration of progress towards widespread, carbon-free, sustainable aviation.”