Dr. Yi Cui, a winner of the 2004 MIT Technology Review World Top 100 Young Innovator Award (among other notable awards), and Assistant Professor in the Department of Materials Science and Engineering at Stanford University, was a distinguished presenter at the CAFE Foundation’s Third Annual Electric Aircraft Symposium last April. He talked about the structure and manufacturing of lithium-ion cells, and the material limitations placed on the performance of those cells. His breakthrough in using nanowires in the cathode promises an 80-percent gain in the cell’s charge-holding ability, equivalent to ten years of the normal cell improvement of eight percent per year. The good news was somewhat of a letdown for many, who were hoping to hear of a total 10X performance improvement for the entire battery.

Dr. Cui advised attendees that the introduction of similar improvements in battery anodes would be required before that quantum leap in performance could be achieved. In the meantime, as reported in our entry, “The Painted Battery,” (December 10, 2009), Dr. Cui and his students demonstrated yet another area of their expertise. These two accomplishments represent only a small part of Dr.Cui’s portfolio, as a visit to his Stanford University Publications page reveals.

His collaborator by correspondence, Dr. Jaephil Cho of Hanyang University in South Korea, is an associate professor of applied chemistry. Together, the two have attacked the problem of developing a silicon nanotube electrode to replace the commonly used carbon electrode in lithium ion batteries. Despite the fact that silicon can accommodate ten times the amount of lithium that graphite can, the bursts of energy made possible by this characteristic flexes the silicon, eventually, as one article describes, “pulverizing” the silicon anode and leading to a very short battery life. Dr. Cho headed up research on nanotube anodes, created a method to make the anode produce the necessary capacity and power from the battery without having things come unglued. Batteries with the silicon anodes have managed 200 cycles, so far, without being destroyed. Obviously, longer cycle life is a must, and cathodes and anodes must each be capable of the 10X performance boost that their combining could produce.

Depending on one’s grades in chemistry, the following from the abstract of the recent Nano Letters paper by Drs. Cui and Cho and their collaborators, may make the promise of this advanced technology more readily apparent.

“We present Si nanotubes prepared by reductive decomposition of a silicon precursor in an alumina template and etching. These nanotubes show impressive results, which shows very high reversible charge capacity of 3247 mA h/g with Coulombic efficiency of 89%, and also demonstrate superior capacity retention even at 5C rate (=15 A/g). Furthermore, the capacity in a Li-ion full cell consisting of a cathode of LiCoO2 and anode of Si nanotubes demonstrates a 10 times higher capacity than commercially available graphite even after 200 cycles.” 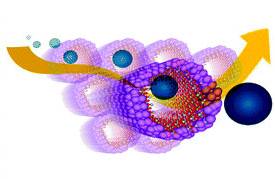 To hear more about this exciting line of research, plan on attending the Fourth Annual Electric Aircraft Symposium (EAS IV), because Dr Jaephil Cho will be there to explain the process and the promise of his work. This dynamic gathering of experts in the realm of electric flight is hosted this year at the Rohnert Park, California Doubletree Inn (Near Santa Rosa, home of the CAFE Foundation) on April 23 and 24, 2010.  Make your plans soon, as this is certain to be a well-attended event.