Seriously, think of a battery in your cell phone that could jump start a car, and then be recharged “in the blink of an eye.”  That’s exactly what mechanical science and engineering professor William P. King and his team of researchers at the University of Illinois at Urbana-Champaign claim to have created.

The most powerful microbatteries ever documented “outpower even the best supercapacitors” and could be in cell phones and small portable devices in the next few years.

“This is a whole new way to think about batteries,” King said. “A battery can deliver far more power than anybody ever thought. In recent decades, electronics have gotten small. The thinking parts of computers have gotten small. And the battery has lagged far behind. This is a microtechnology that could change all of that. Now the power source is as high-performance as the rest of it.”

Until now, the need for portable power left one with a sharply-delineated choice – to use devices such as capacitors for short-term bursts of high power, or to turn to batteries for low-power energy that would allow longer running time.

The University explains further: “There’s a sacrifice,” said James Pikul, a graduate student and first author of the paper. “If you want high energy you can’t get high power; if you want high power it’s very difficult to get high energy. But for very interesting applications, especially modern applications, you really need both. That’s what our batteries are starting to do. We’re really pushing into an area in the energy storage design space that is not currently available with technologies today.” 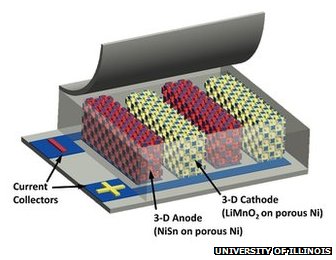 While researchers have spoken of achieving 10X energy storage capabilities, these researchers claim to have demonstrated 30X batteries with their Lego-like micro-batteries.  The three-dimensional building-block look contributes to the capacitor-like power and high-duration energy storage combined within a very small cell. As the press release notes, “…By tweaking the structure a bit, the researchers can tune them over a wide range on the power-versus-energy scale.”  To sweeten the battery’s charms, it can be recharged 1,000 times faster than current technology’s best.  Imagine recharging an electric car in less time than it takes to refuel a gas-powered vehicle.

Researchers combined a “novel fast-charging cathode design” by Paul Braun’s group, matched that with a similar anode, and “developed a new way to integrate the two components at the microscale” to craft their paradigm-breaking battery. 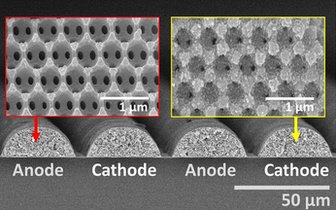 British researchers express concern over the safety of such powerful batteries, according to a BBC report.

“Prof King acknowledged that safety was an issue due to the fact the current electrolyte was a combustible liquid.

“He said that in the test equipment only a microscopic amount of the liquid was used, making the risk of an explosion negligible – but if it were scaled up to large sizes the danger could become “significant”.

“However, he added that he soon planned to switch to a safer polymer-based electrolyte to address the issue.”

Charlie White of Mashable.com speculates on the applications possible with the new technology, and adds a bit of unnerving trivia.

“Imagine what a battery with this kind of power could do to our world, which is increasingly dependent on energy storage devices. Electric cars could become a lot more practical and recharge in less than the time it takes to fill up a gas tank. Solar power could be stored easily overnight with incredible efficiency, and many devices that now must be plugged in could be powered by these super batteries.

“It’s interesting that this technology originated at the University of Illinois at Urbana-Champaign, the birthplace of the fictional HAL 9000 computer in 2001: A Space Odyssey.”

Researchers are working toward integrating this power source with other electronics and devising ways to manufacture the batteries at low cost.

“Now we can think outside of the box,” Pikul said. “It’s a new enabling technology. It’s not a progressive improvement over previous technologies; it breaks the normal paradigms of energy sources. It’s allowing us to do different, new things.”

The National Science Foundation and the Air Force Office of Scientific Research supported this work. King also is affiliated with the Beckman Institute for Advanced Science and Technology; the Frederick Seitz Materials Research Laboratory; the Micro and Nanotechnology Laboratory; and the department of electrical and computer engineering at the U. of I. 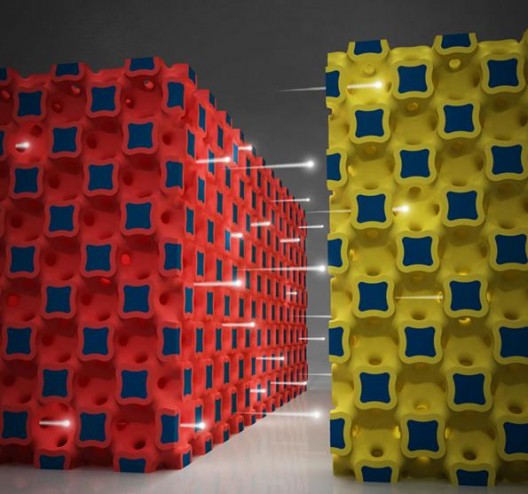 The graphic illustrates a high power battery technology from the University of Illinois. Ions flow between three-dimensional micro-electrodes in a lithium ion battery. (Credit: Image courtesy of the Beckman Institute for Advanced Science and Technology)

“High-performance miniature power sources could enable new microelectronic systems. Here we report lithium ion microbatteries having power densities up to 7.4 mW cm−2 μm−1, which equals or exceeds that of the best supercapacitors, and which is 2,000 times higher than that of other microbatteries. Our key insight is that the battery microarchitecture can concurrently optimize ion and electron transport for high-power delivery, realized here as a three-dimensional bicontinuous interdigitated microelectrodes. The battery microarchitecture affords trade-offs between power and energy density that result in a high-performance power source, and which is scalable to larger areas.”

That last sentence gives hope that such a battery may be a near-future possibility for EVs of all kinds – including airplanes.

Thank you to Rienk Ayers for the link to the BBC.