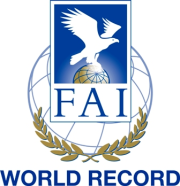 This small group developed the current power system with Electravia, and campaigned the airplane at Sisteron, France for these initial records.  They plan on going higher, faster and farther, including a flight across a significant body of water.

Jean Luc shared the following with your editor.  “My culture is facts, no more no less. As we equipped the aircraft [with a] full set of recorders, positive difference was easy to see between before and after setting wing deturbulators: 20% of gain[ed] energy at constant speed and altitude. Not so bad, but not an exhaustive statistic campaign as once again we are not working for introducing this product in aviation. Anyway since this time we kept this good result, and we will again tomorrow perform a reference flight. In about 2 months we will build a new wing, lighter (to accept more batteries or primary because we would like to cross some water) and specifically adapted to deturbulator. When new wing will be stabilized, we will again make a last flight with old wing WITHOUT deturbulators, to see if energy difference at constant speed and altitude is again 20% more. I have few doubts about it. In addition, [the] lift center moved as I saw [a] stability difference during flight, and this effect is very prominent. As I told you I have few doubt, and I flew it. 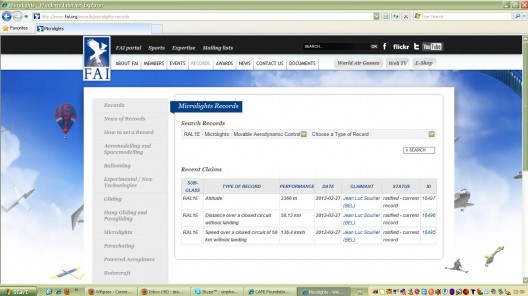 “We are an R&D team, so cost has [little] impact on us. When we have no money we are doing nothing, and when we have some the aim is to spend it as quickly as possible. (Editor’s Note: Words to Live By!) So money is absolutely not a factor…. I think a good and experienced worker could have the full set for about 40,000€ ($52,000) shared 50-50 between power chain and airframe plus instruments. Not that bad for such a performing system.”

Jean Luc computed energy prices at 2011 prices and found gasoline and electric costs for flight in this airplane to be roughly equivalent.  This may come as a surprise, even though the MC-30 is normally powered by a Briggs & Stratton two-cylinder, 26-horsepower engine which burns 1.25 U. S. gallons or less per hour.  Petrol’s huge energy density gives it an advantage in such a lightweight airplane, and the weight of batteries detracts from electrically-powered final results.  Subsequent raises in gas prices have tilted the balance toward electricity being more economical, though, according to Jean Luc.  He adds that , “maintenance and resource provisions are one tenth in electric, and this does not take in account airframe maintenance difference.”

Despite the team’s limited budget, Jean Luc can dream big.  He wrote recently, “Remember we are flying the kilometer with a little bit more [than] energetic equivalent of ONE gram of hydrogen. Try to imagine with a good H2 fuel cell what would come out in “limited fuel” FAI category (7,5 Kg !!!!!!!)  (The exclamation points are Jean Luc’s, but your editor concurs.)