A European-based consortium of academic and industrial groups take a very old idea, add a plasma system that seems to be nearly science fiction, whip them together and create quiet, efficient, vector-controlled flight.  That’s the promise, although it seems a bit much to take in all at once.  But the folks at the ACHEON (Aerial Coanda High Efficiency Orienting-jet Nozzle) project seem to think they have a potential winner here.  ACHEON represents two other acronyms, so let’s define those first.

The original idea for the project was part of H. O. M. E. R., not of the Simpsons, or even of epic Greek poetry, but of the “High-speed Orienting Momentum with Enhanced Reversibility” variety.  Combine that with P. E. A. C. E., the “Plasma Enhanced Actuator for Coanda Effect” with a low moving-parts count, and you get a method for enhancing flow, increasing thrust and vectoring that thrust for smoother, quieter rides and better maneuverability.

Aerospazio Campania thinks the key strengths of ACHEON “are the absence of moving elements, … control simplicity, a high precision, a very fast response, a consistent reliability and the possibility to work with any fluids (gases, liquids and mixes).”

“The result – summarizes Prof. Antonio Dumas, project supervisor – will enable [directing thrust flow] with an angle that can be adapted to any flight condition in a prompt and dynamic way, with very reduced response time ([hundredths]of a second). The possible implications for aeronautics are clear: vertical take-off and landing, reduction of spaces for airport operations, a better maneuverability, the elimination of traditional aerodynamic appendages, a better aerodynamic efficiency and low [fuel] consumption would be achieved by means of using the ACHEON device”. 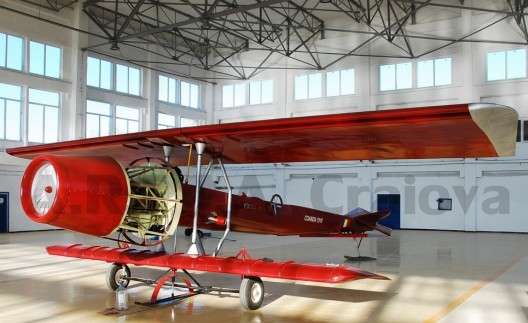 Henri Coanda’s 1910 cold jet-powered airplane was a demonstration of his named effect. Unfortunately, it crashed and burned on its first flight

Going back to the beginning, Henri Coanda was a Romanian inventor who probably owed his life to not wearing a seat belt.  “It was on 16 December 1910. I had no intention of flying on that day. My plan was to check the operation of the engine on the ground but the heat of the jet blast coming back at me was greater than I expected and I was worried in case I set the aeroplane on fire. For this reason I concentrated on adjusting the jet and did not realize that the aircraft was rapidly gaining speed. Then I looked up and saw the walls of Paris approaching rapidly. There was no time to stop or turn round and I decided to try and fly instead. Unfortunately I had no experience of flying and was not used to the controls of the aeroplane. The aeroplane seemed to make a sudden steep climb and then landed with a bump. First the left wing hit the ground and then the aircraft crumpled up. I was not strapped in and so was fortunately thrown clear of the burning machine.”

“Jet blast” seven years after the Wrights’ first flights may seem an anachronism, but Coanda was 30 years ahead of Frank Whittle, the British designer widely credited with the first jet engine.  It seems even odder that the airplane he crafted for the flight was all wood, beautifully crafted plies wrapped around the tubular fuselage.  The heat would have come from the exhaust of the 50-hp, four-cylinder engine driving the compressor.

The Coanda effect, named for the intrepid attempted flyer, has to do with that simple science experiment we show kids in grade school.  Its definition seems simple enough. Coanda Effect: A moving stream of fluid in contact with a curved surface will tend to follow the curvature of the surface rather than continue traveling in a straight line.

Water flowing around spoon is simple visualization of Coanda effect

Beyond Coanda’s initial attmpts, others have attempted to use the underlying phenomenon in aircraft.  Otto “Pete” Bartoe in the 1970s created the Ball-Bartoe JW-1 “Jetwing,” now hanging in Denver’s Wings Over the Rockies Air and Space Museum.  The airplane, powered by a Pratt & Whitney JT-15D1 turbofan engine, could reach 400 miles per hour, and hang in the air at around 40 mph.  Harold “Fish” Salmon, Lockheed’s famous test pilot, flew the airplane, with Bartoe flying chase at lower speeds in his Piper Super Cub. 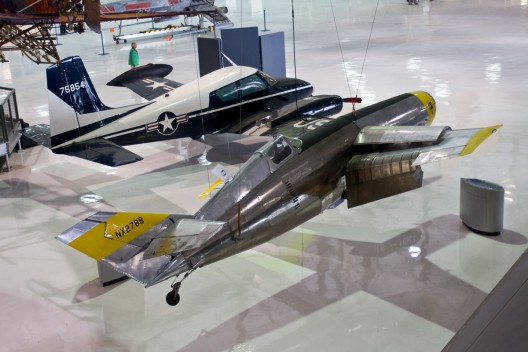 What made this 10:1 speed ratio possible?  70-percent of the wing was “blown” by the jet exhaust, neatly ducted to flow over its upper surface and under a small augmentor wing.  The upper wing helped draw air through the resulting slot and increase lift, while the Coanda effect over the highly flapped main wing allowed slow speed under control.

Because Coanda’s 1936 patent showed an inverted bowl being lifted by air blowing around the circumference of the bowl, several attempts have been made with “flying saucers,” including an Avro Canada vehicle notorious for its appearances in newsreels of the late 1950s.

The idea was good, but the execution was flawed.  “The Avro Canada VZ-9 Avrocar was a VTOL [Vertical Take Off and Landing] aircraft developed by Avro Aircraft Ltd. (Canada) as part of a secret U.S. military project carried out in the early years of the Cold War.  The Avrocar intended to exploit the Coandă effect to provide lift and thrust from a single “turborotor” blowing exhaust out the rim of the disk-shaped aircraft to provide anticipated VTOL-like performance. In the air, it would have resembled a flying saucer.”

Flight testing revealed problems with thrust and controlability, leading to the machine’s ungainly appearances in numbers of newsreels. 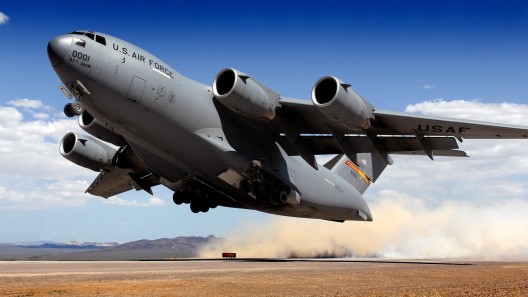 C-17 III lifting off in 2010 on 50-50 mix of jet fuel, biofuels consisting of half rendered beef tallow and half Fischer-Tropsch liquified coal or natural gas.  Jet blast goes over significant portions of upper surface of flaps.  Photo from www.makebiofuels site

More recently and successfully, the Boeing (formerly McDonnell-Douglas) C-17 Globemaster uses “blown flaps” that exploit the Coanda effect; they were “developed by a team of researchers at NASA Langley Research Center in the mid-1950s. The ‘externally blown flap’ or ‘powered-lift system’ enables the airplane to make slow, steep approaches with heavy cargo loads. The steep approach helps pilots make precision landings with the aircraft, touching down precisely in the spot desired on limited runway surfaces. This was accomplished by diverting engine exhaust downward, giving the wing more lift. In the flap system, the engine exhaust from pod-mounted engines impinges directly on conventional slotted flaps and is deflected downward to augment the wing lift. This allows aircraft with blown flaps to operate at roughly twice the lift coefficient of that of conventional jet transport aircraft. “

Not to be outdone, the Russians fielded the smaller, but agile, AN-72 and AN-74, even more apparently “blown wing” aircraft.”  Their ability to fly from short fields is enhanced by their high-lift, contributed to by the Coanda effect.

In the next segment, we will look at the Acheon Project itself, with the promise that modern electronics can add to a 105-year-old technology.  How might this blend of old and new contribute to aircraft that will make pocket airparks a reality?