EV-World.com first stymied this editor’s hopes, and then gave cause to hope at an elevated level.  Two articles in jousting juxtaposition explored this dichotomy.

Anthony Ingram took a jaundiced view of present battery progress and the hopes for a more energy-dense future.

He noted that, “There’s kind of a running joke within the electric car world that the next generation of batteries is just a decade away. And the next time you ask, it’s still a decade away. Even a decade later.

“Well, according to the U.S. Department of Energy, the next generation of usable battery technology is – wait for it – around ten years away.”

He explains that today’s EVs are running on ten-year-old technology, and that the most promising current new technologies could power the next decade’s cars.

Keying from remarks by Tony Hancock of the Department of Energy’s Kentucky-Argonne Battery Manufacturing Research and Development Center, Ingram explains that, “current lithium-ion chemistry still has room for improvement, and as much effort is being put into improving what we have as there is developing all-new technology.”

“’We’re trying to get the (development) time down by getting academicians and industry involved… But lithium-ion (batteries) will be the solution for the next decade, maybe two,’ said Hancock.”

Most developments will involve making lithium batteries less expensive, with other approaches working with lithium-air or lithium-sodium, theoretically more energy-dense.  Ingram closes his melancholy look at the future with the time frame in which such improvements will take place.

The somber assessment of decades between improvements, neatly overlooking the incremental small changes within each decade, is lightened somewhat by a following entry concerning Prieto Battery, a spin-off from Colorado State University, which wants to produce lithium batteries “that are up to 1,000 times more powerful, 10 times longer lasting and more energy efficient than batteries that are currently available.”

The technology is a product of Amy Prieto’s research.  An assistant chemistry professor in the University’s College of Natural Sciences, Prieto is developing a 3D battery architecture “that charges faster, lasts longer and is better for the environment.”

Using nanotechnology to integrate nanowire or copper foam substrates with intertwined anodes and cathodes, the battery will be a solid-state unit with no liquid electrolyte.

According the company’s web site, “Prieto Battery is poised to commercialize a battery that will deliver transformational performance in power density, improve energy density, last longer and will be made using highly recyclable materials that don’t require toxic acid to produce energy.”  Their estimate is that the commercialization will take place in the next 12 months.  This laudatory self-assessment and timeline sound good, and has at least an interesting pair of new architectures that counter some issues of current lithium cells.

The first to emerge will have a copper foam substrate looking a bit like a nano Brillo pad and comprising 98-percent air.  Anode and separator materials are electrodeposited onto this foam and cathode material is applied as a liquid slurry.

Prieto claims, “Due to an increase in surface area of approximately 60X for lithium-ion diffusion, Prieto’s foam battery is expected to have power densities reaching 14,000 W/L while maintaining energy densities of 650 Wh/L. The foam battery will be customizable, capable of being optimized for either power density or energy density.”

First batteries will be marketed in the e-bike world, and the even more powerful second type system will doubtless have a future in bigger EVs.

Prieto said its second, and highest performing battery will be based upon growing nanowires in an aluminum oxide template to increase the surface area for lithium-ion diffusion by 10,000X, radically increasing energy and power density into the range of supercapacitors, as shown by Prieto’s comparison charts. 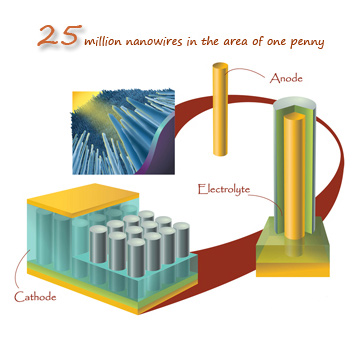 25 million nanowire electrodes in the area of a penny

Prieto’s web site explains that their researchers, “Have designed a revolutionary battery architecture intended to address the slow diffusion of lithium ions (Li+) into and between the anode and cathode. This patent-pending architecture is designed around a nanowire array of anodes, conformally coated by an ultra-thin polymer electrolyte and then surrounded by a cathode matrix. The result is a three-dimensionally structured lithium-ion battery composed of interpenetrating, nanometer scale electrodes with extremely short Li+ diffusion distances and a power density that is orders of magnitude greater than comparable two-dimensional architectures in use today, and under development for future applications. Furthermore, the use of copper antimonide (Cu2Sb) nanowires lends an unprecedented degree of stability to the anode and has already demonstrated virtually no loss of capacity over extensive cycling – a dramatic improvement over other anode materials.”

The spin-off is aiming to commercialize the technology in the next 12 months, having raised $5.5 million of a planned $6.8 million funding round.

Patience.  The future may be only 12 months away and exuberance will surely follow.