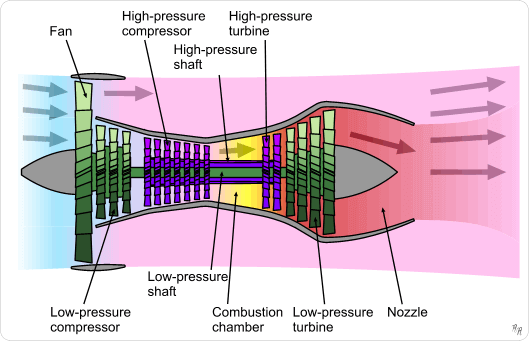 Nano twins are not something Robin Williams’ Mork would make friends with.  They are destructive pairings inside alloys, and getting rid of them will apparently lead to cleaner jet flight.  Ohio State University researchers devised a technique they call “Phase Transformation Strengthening” which leads to stronger alloys and less deformation of the final products.

This is good news for jet engine and turbine designers, since an engine that can run hotter will burn its fuel more completely, resulting in a less toxic exhaust.  Nano twins “are microscopic defects that grow inside alloys and weaken them,” according to Ohio State University researchers.  These defects weaken and deform an alloy when it is exposed to heat and pressure – two things present in a jet engine or power turbine.

Michael Mills, professor of materials science and engineering and leader of the project at Ohio State, led the research.  “We found that increasing the concentrations of certain elements in super-alloys inhibits the formation of high-temperature deformation twins, thereby significantly improving the alloys’ high temperature capabilities.”

Starting with two commercially-available superalloys, Mill’s team simulated conditions found in jet engines, and “compressed samples of the alloys with thousands of pounds of pressure at around 1,400 degrees Fahrenheit.”  Turning to the electron microscopes at Ohio State’s Center for Electron Microscopy and Analysis (CEMAS), they had access to, “One of the largest concentrations of electron and ion beam analytical microscopy instruments in any North American institution.”  Examining the two samples under “atomic-level imaging,” researchers found divergent paths related to the elements in the alloys.

In the first alloy, “Atoms of cobalt and chromium filled the fault… weakened the area around the fault, allowed it to thicken and become a nano twin.  In the second, titanium, tantalum and niobium “tended to diffuse into the faults instead.”  This diffusion stabilized the area and resisted the formation of nano twins.  The second allow turned out stronger and more stable than in its original form.

Timothy Smith, a former Ohio State student and lead author of the team’s Nature Communications paper wrote, “’We discovered that when the amount of titanium, tantalum, and niobium in the alloy was increased, while decreasing cobalt and chromium, we could actually strengthen the region around the faults and prevent the fault from widening into a nano twin.”

Such metallurgy should enable future turbines to last longer and be more economical in operation.  Until we come up with sun-powered jumbo jets, this is progress we can all applaud.

A big thank you to Colin Rush for the lead on this story.