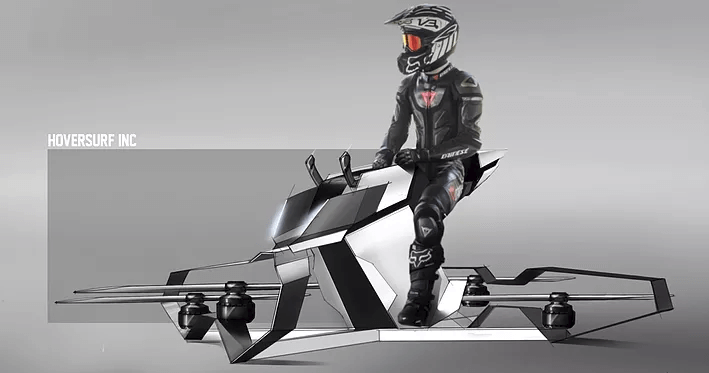 Hoversurf, a Russian flying motorcycle, has been getting a lot of press lately.  “Looks like a hell of a ride,” trumpets TheNextWeb.  Mashable headlines, “The first manned hoverbike could finally fulfill your ‘Star Wars’ dreams,” but points out, “Those dangerous-looking propellers spinning right next to the pilot’s legs.” New Atlas (formerly Gizmag) says it is, “Equally amazing and horrifying.”

Hoversurf’s Scorpion evokes Star Wars with its clean white gloss.  But like the movie’s speeder bikes flung about by heroes and villains alike, seems equally dangerous with its wooden propellers at two different heights – ankle-biter and knee-slapper.  Protective shields theoretically will prevent slicing and dicing, and future plans call for an enclosed cabin with the occupant more secure from maceration.

Some qualms persist.  Rivals like e-volo’s Volocopter spread lift over 16 propellers, and the eHang 184 has eight blades.  The lack of redundancy at the four corners might be a problem if one motor or reduction belt fails.  Rivals feature direct drive from motor to propeller, eliminating the possible failure points of belts and pulleys.  New Atlas frets that initial impacts with the ground will shatter the wooden blades.

Despite all this, Hoversurf proclaims, “For the moment, SCORPION platform is increasingly seen as an extreme sports instrument, yet the vessel’s transportation potential remains evident.”  The web site shows Scorpions taking off from a large rooftop platform similar to that in Uber’s white paper, and a sky cab similar to eHang’s. 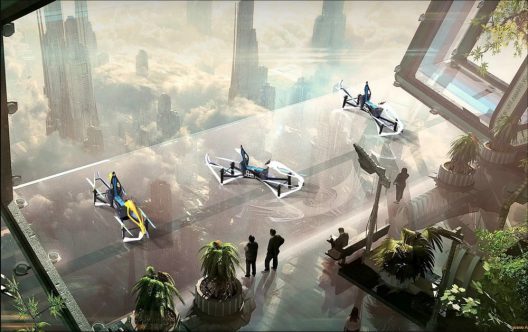 The big jump will be going from extreme sports-inspired risk-taking to risk-free commuting in a stable pod.  That pod will probably incorporate the group’s self-described, “Safety system powered by state of the art flight controllers, special logical programming and passive elements with computer aided speed and altitude limiting.” 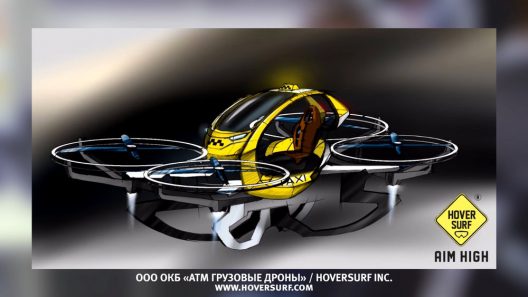 Hoversurf’s projected sky taxi looks more like eHang’s or Volocopter’s approach, although it is still limited to four rotors

Crowdfunding supporters who looked forward to delivery of a thrill ride will have to be replaced by paying customers seeking a secure commute over the gridlock below.  The mission statement will begin to look more like that of Uber’s and Airbus’s A3 rather than that of the X Games.  The Russian firm now has offices in downtown San Francisco, possibly a commitment to going in that direction.