David Bettencourt, a defense attorney in Hawaii and a regular reader of the blog, sent this note about Burt Rutan and his early interest in hybrid power for aircraft.  According to David, “A July 2000 Road & Track interview of Burt Rutan regarding the hybrid Honda Insight might be of interest.  It stated:

“Does he see any application of hybrid propulsion for airplanes? An innocent question, although it leaves Rutan unusually silent. ‘Gee, maybe I shouldn’t disclose this in Road & Track. But at the risk of someone else doing this first, let me tell you about an airplane that would be really interesting to do.  This is fascinating….’

“Rutan leans back and stares into middle distance.  ‘Visualize an electric airplane with enough batteries to climb to about 500 feet.  Actually, it would have several small electric motors with small propellers scattered all around the airplane—some on the tail, some on the wings—so if one motor seized, it’s just a nuisance.  Plus, there’s a phenomenal advantage here: You wouldn’t need control surfaces. Put a motor on a high part, one on a low part and give the first power and the other negative thrust or regen[eration], and you pitch down, for instance. No elevator, no ailerons, no rudder.

“’Okay.  Now after climbing to 500 or 600 feet, the batteries are pretty much puked.  However, onboard would be this gas-powered generator that would produce 10 to 20 percent more [electrical] power than you need to cruise. The climb from 500 feet would be slow, but, the most important part to climbing is the initial part, getting over the trees. For landing, or even if something bad happens like the generator seizes or you run out of gas, all the way down the props would be doing regen, charging the batteries up for a controlled landing (altitude being equivalent to potential energy).  During the last part, coming down, you actually want drag anyway; a very efficient airplane needs  flaps or speed brakes to slow it down.

“’Here’s a prediction: You may find that within the next few years Burt Rutan will go off and build one of these.’”

Eleven years later, with a few differences in the execution of the plan, and slightly better batteries, that’s what Rutan has done.  Aviation Week, Popular Science, and Gizmag all report on, as expected, a rather different vehicle that Rutan’s team has brought forth.

Guy Norris, reporting for Aviation Week,  says, “Scaled Composites is exploring potential development options for a twin-fuselage, hybrid-powered aircraft that could prove to be a practical solution to the long-held dream of a flying car.

“Dubbed the Model 367 BiPod, the two-seat vehicle is configured with removable wings, stabilizer and tail tips to enable swift conversion into a road vehicle. Seating one person per fuselage, the BiPod is designed to be driven like a car from the left-hand cockpit and flown as an aircraft from the right side.”

It’s obviously a Rutan-inspired design, with elements of previous creations, but its own unique approach to solving the problem at hand.  It was to be a “low-cost electric testbed,” but evolved into a flying car which has made several hops on the Mojave, California runway.  Since its propellers are not yet installed, these have been literal hops, with the vehicle using its wheels to gain speed and probably a slight stick pull to gain altitude for an all-too-brief flight.

Going from preliminary design to physical being in only four months, the project was meant to celebrate Rutan’s retirement in April from Scaled Composites, the company he founded and headed. 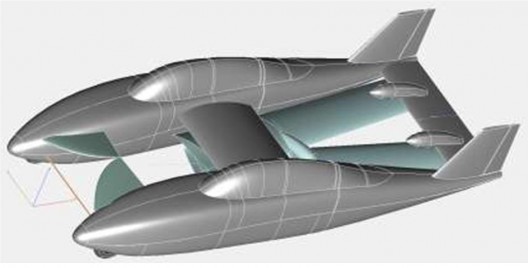 BiPod with its wings tucked in for road use. Illustration: Scaled Composites

Next will be development of the craft’s distributed propulsion system, according to David Sanchez, a design engineer on the project.  Power will be provided by two 450 cc, four-stroke engines, one in each fuselage.  These will drive generators which will provide electricity to 15 kilowatt motor-driven wheels at the rear of each fuselage.  Unpowered nose wheels are steerable.

To fly, four 32-inch diameter propellers will be spun by a 15-kW motor getting its power from the engine/generator package.  Initially, each outer wing leading edge will have a propeller and the stabilizer between the fuselages will have two props.

A lithium battery pack in each fuselage nose, recharged by its engine/generator package, can provide power for at least two landing attempts if there is a problem with an engine.  Sanchez explains that, “The propulsion system is fully redundant with a wheel-drive motor, two propellers and motors, controllers, 1.2 kwh batteries and an internal combustion engine in each fuselage.”

Rutan told Aviation Week, “The most significant technical accomplishment is the new configuration—unique for a roadable airplane, in that the flight mode has an efficient aerodynamic configuration, low span-loading and high aspect ratio.  Yet, it can quickly be converted to a roadable car that can operate on freeways in high crosswinds and can park in a single-car garage.”

Performance figures, especially with such small power components, are a bit on the incredible side.

Wings can be tucked between the fuselages for ground transport, an operation that will take about 10 minutes.

Aviation Week reports, “A key design consideration was where to place the center of gravity (cg), as the preferred location differs between air and ground vehicles, says Sanchez. A car cg is normally further aft for improved traction and handling with rear-wheel drive configurations. The best location for an aircraft cg, on the other hand, is further forward than a car, at around 25% of the wing chord.

“The design solves this conundrum by positioning the cg for road stability, while using direct blowing of the all-moving horizontal stabilizer and power to the rear wheels to rotate for takeoff.  A flap on the wing section between the fuselages can be deployed to help generate lift at takeoff, although its primary function is to act as a spoiler during car mode.” 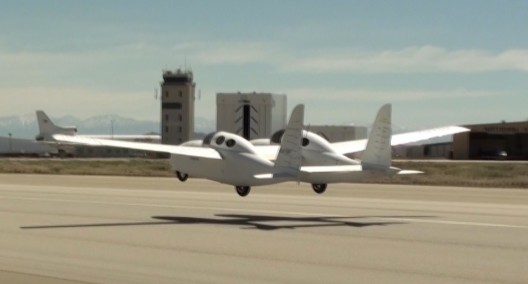 Test pilot Mike Alsbury reports of the crow hops, “We could not get quite to the speeds we wanted. However, we still managed to fly in ground effect, and it felt very stable.”  He says the “low center of gravity and wide wheelbase also resulted in a stable, controllable road configuration both on a skid pad and at freeway speeds up to around 80 mph.”

The tricky part must be remembering which fuselage you’re in.  “With a steering wheel and foot brake in the left-hand cockpit and flying controls (side-stick, rudder/brake pedals) in the right, the throttle is the only interlinked system between the two.” 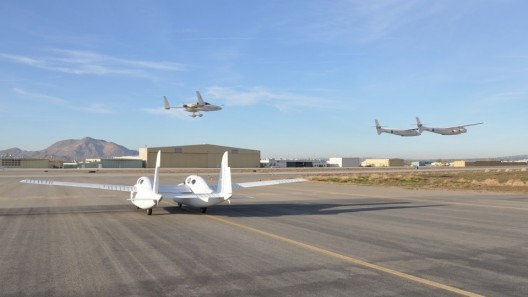 Scaled is showing off its latest progeny to gauge interest in the concept, even though President Doug Shane says the firm, “is not in the business of building roadable aircraft, or kits.”  Curiously, the company suggests there might be interest from the military, although millions of civilians who’ve long dreamed of a practical flying car might want a place in the line of potential buyers.

(Note: Design work may not be complete, since the video shows three motors and propeller, and concept sketches show four.)