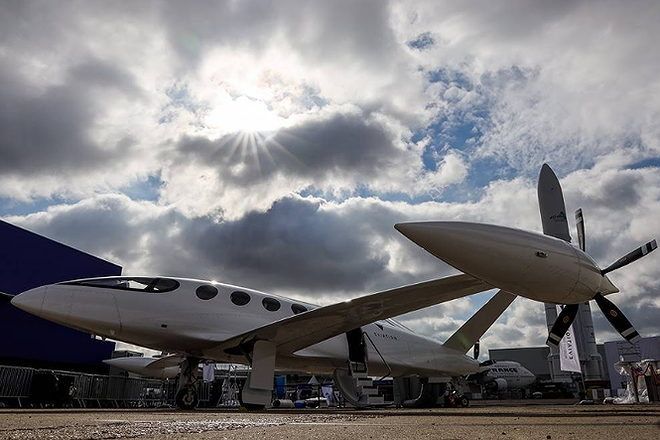 Eviation, an Israeli company developing Alice, a high-speed, intermediate-distance commuter airplane, brought its prototype to the Paris Air Show this week.  Eviation co-founder and CEO Omer Bar-Yohay gave journalists a 27-minute overview of the aircraft, the philosophy behind it, and projections on its immediate future.

“It’s basically a huge battery with some plane painted on it,” he told reporters.

The 6,350 kilogram (13,970 pound) airplane carries 900 kilowatt-hours of batteries, equivalent to the cells in nine Tesla S P100D automobiles or one Tesla semi-truck.  Even that, according to rough figuring by yours truly and polished calculations by a smarter reader, seems to provide for only half the necessary energy to provide the range Eviation claims.  Will flight tests prove us misguided?

Carrying capacity and performance are similar to the Beechcraft King Air.  The King Air burns 100 gallons per hour at a fuel cost around $550.  The Alice consumes about 400 kilowatt hours at a cost of $44 (based on the PGE rate of 11 cents per kW-hour).  Its sleek shape provides Alice with a better lift-to-drag ratio, but maybe not enough to account for its total efficiency.

The Martha’s Vineyard Times reports that Cape Air Airlines will be the first to purchase at least 10 Alices.  “At the Paris Air Show, the chief executive officer for Eviation, Omer Bar-Yohay, announced that Cape Air would be the first customer to implement the new efficient aircraft technology, with ‘double-digit’ order numbers.” 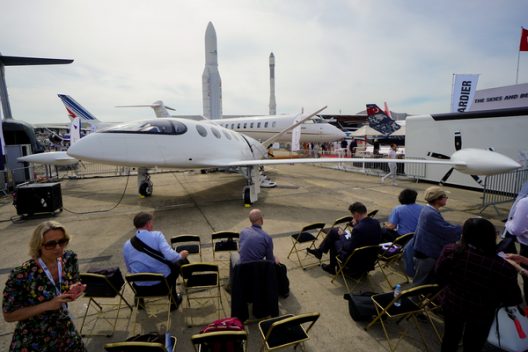 Alice drew a crowd to hear an address by Eviation’s CEO, Omer Bar-Yohay

The Times adds, “Although the plane is still in its developmental stages, two different versions of the Alice are planned. The initial model will be used for air-taxi operations, and will use energy stored in a lithium-ion battery. The following version will be an extended-range executive aircraft with a larger, more powerful aluminum-air battery.”  That battery will probably come from Phinergy, which has been developing such a battery for the last several years.

Phinergy claims an energy density of eight kilowatt hours per kilogram of aluminum, an excellent number compared, for example, to the 260 Watt-hours per kilogram in Bye Aerospace’s eFlyer 2 or 4.  That’s a demonstrated number by Kokam, an established lithium-ion provider.  Note, though, that the Phinergy number is for the aluminum only – not the total battery weight or its control or charging mechanisms as is the Kokam number. 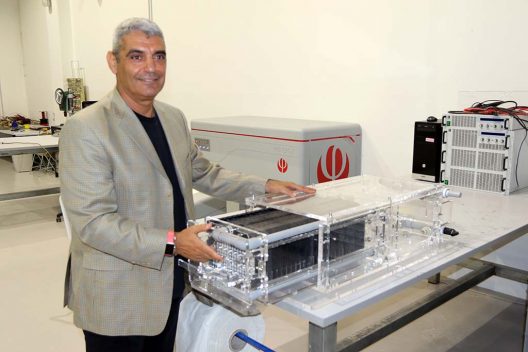 Still, Phinergy has demonstrated 1,000-kilometer (620-mile) range with its batteries in a Renault Zoe (similar to a Nissan Leaf.  Only 112.5 kilograms (247.5 pounds) of aluminum would be required to match the energy in Alice’s current cells.  We can only speculate at this point on the total weight of the complete energy package.

Cape Air, while pioneering electric power on its routes, will doubtless benefit from the publicity accruing from their forward outlook.  We need others to follow suit.