A day after Pipistrel, the DLR and associates flew the first public demonstration of their four-seat hydrogen-powered HY4, your editor and a friend took a brief hop around the Aurora State Airport in Oregon in EAA’s Ford Trimotor, the first certified airliner in America.  The two events, roughly equal in duration, if not in historicity, demonstrate a readily observable progress in aeronautics. 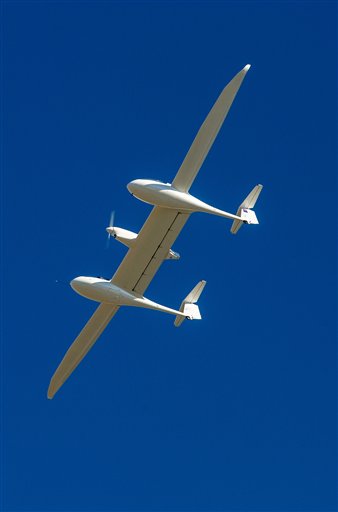 HY4 is pictured at the airport in Stuttgart, Germany, Thursday, Sept. 29, 2016. A 10-minute test flight Thursday at the airport in southwestern Germany involved two pilots and two dummy passengers. (Christoph Schmidt/dpa via AP)

A quickening of design and technology

14 years after the Ford 5AT first flew on a scheduled route that took 51 hours total time to cross the United States (and split transport duties with trains), your editor’s father was whisked nonstop by Army Air Corps C-54 across the Atlantic to Shannon, Ireland, and then to Bobbington and Newquay, England to work on bombers for the duration of the conflict.

Those 14 years seem like a major quickening of design and technology, which brought us pressurized cockpits, turbocharged engines, and great leaps forward in speed, endurance and reliability.

Following the war, a great number of aircraft became available to civilian flyers, many of whom had benefited from flight training during the conflict.  All those craft were essentially pre-war designs, and with few exceptions, continued as trainers and private craft for decades afterward.  Many flew behind opposed-cylinder engines also designed before the war.  Your editor learned to fly in a 65-horsepower Aeronca Champion, for instance.

Some brilliant new designs managed to find their way to market, with homebuilt aviation aficionados often duplicating existing designs, but frequently advancing the state of the art.  Burt Rutan and Dick VanGrunsven (whose Vans Aircraft factory was next to our boarding point) re-imagined design and fabrication techniques to make high performance available with the same general aviation engines used on their humbler brethren.  Even with such stellar engineering, many private airports are windows to past glory.

That experimental spirit prevailed On 29 September 2016, when the HY4 aircraft took off on its first official flight from Stuttgart Airport. The HY4 is the world’s first four-seat passenger  aircraft (the qualification is important) powered solely by a hydrogen fuel cell system. Researchers from the German Aerospace Center (Deutsches Zentrum für Luft- und Raumfahrt; DLR) developed the aircraft’s power train and worked on the project with industry and research partners.

Using the airframe from the Green Flight Challenge winning Pipistrel G4, The HY4 fuel cell aircraft was developed by the DLR Institute of Engineering Thermodynamics together with partners Hydrogenics, Pipistrel, H2FLY, the University of Ulm and Stuttgart Airport.

One special addition to our Tri Motor outing was that Robin Reid, one of the pilots in the Green Flight Challenge G4, showed up in his 1929 Monocoach to help with day’s operations.  We had a splendid example of past aircraft piloted by a man who helped show the future of aviation.

A successful team is a happy team – HY4 pilots, technicians and mechanics made an aviation first possible

According to DLR, their researchers “were responsible for developing the hydrogen fuel cell power train and installing it in the aircraft. The power train consists of a hydrogen storage system, a low-temperature hydrogen fuel cell and a battery. The fuel cell converts hydrogen directly into electrical energy. The only waste product from this process is water. An electric motor uses the power thus generated to propel the aircraft. A high-performance lithium battery covers peak power loads during take-off and when climbing. If the hydrogen required for the fuel cell is generated via electrolysis using power from renewable energy sources, the HY4 can fly without generating any emissions at all. The aircraft is operated by the DLR spin-off H2FLY.”

Joseph Kallo explained this airplane to attendees at the first Sustainable Aviation Symposium in May.  The airplane is a direct “descendant” of the Pipistrel G4, but replaces the large battery pack with a hydrogen fuel cell power system.  Each pod and boom fuselage contains a pressurized tank (437 bar or 6,338 psi) holding nine kilograms (19.8 pounds) of hydrogen – enough for 750 kilometers (465 miles).  Liquid hydrogen could extend that range to 1,500 kilometers (930 miles).  In a small country like Germany, with refill points in close proximity, this would make H2 a plausible fuel for air travel.  For larger countries, or continents, the level of difficulty might also grow.

Four fuel cell modules in the center engine pod would produce 45 kilowatts, and coupled with the 21 kilowatt-hour battery, generate enough power to make the 80 kilowatt motor propel the airplane.  The lithium battery works only at peak loads.

Many dignitaries and officials showed up for the event, and, “For this short demonstration flight Stuttgart airport (a major European destination) did a great favor and stopped all the other air traffic in the region so the spectators could hear the almost-completely-silent flight of the Pipistrel HY4.”

Elevating electric drives to the next level

The consortium of enterprise and academia envisions a brilliant future for HY4-type aircraft as air cabs, linking to ground transport at strategic hubs.  “Professor André Thess, Director of the DLR Institute of Engineering Thermodynamics, said: ‘The four-seat electrical aircraft Hy4 is a perfect fit to our strategy of exploring synergy effects between electrical transport means on the road and in the air’ because electrical engines would be very well suited for shorter distances. They are low on noise and other emissions and can take off and land even on small airstrips because of their high torque. Bernd Pitschak, CEO of Hydrogenics, added that the intention was to elevate ‘electric drives to the next level.’” 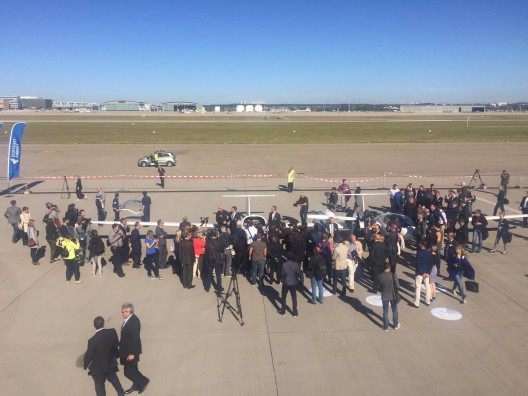 Press showed up en mass for public flight of HY4

H2Fly will operate the HY4, make improvements as needed, and make sure “that research and technology work hand in hand” with the aim of fulfilling Kallo’s vision of transporting more than one pilot and three passengers with this clean technology.

The Ford Trimotor was capable of lifting 15 people (two pilots and 13 passengers), although the EAA limits the payload to ten passengers.  The 420-horsepower Pratt & Whitney Wasp radial engines were the epitome of engine design for their day.  What might a similar electric/fuel cell craft look like today with improved aerodynamics and next-generation power plants?

Technology keeps pushing ahead, but your editor reflected following his flight, on the need to develop rules and standards that stay ahead of that technology.  Passengers looking down on Meteor Crater in Arizona would have been surprised to see another airplane sharing the view.  Today, especially in urban areas, we will need approaches (being developed) that keep us in the air and out of each other’s way.

Experiencing the rattle of the three exceptionally smooth, but still noisy engines brought to mind neighborhood groups that invariably form around the disturbance that arrivals and departures bring with them.  Robin Reid’s mother Amelia, for instance, spent many hours fighting to keep Reid-Hillview Airport operational as the once-rural landscape was covered in clusters of houses and shopping malls.  Quiet transit will be a prerequisite to entry at tomorrow’s airports.  Even with the advances made by the latest versions of popular airliners, electric craft will bring blessed relief to nearby households and businesses.

Our 15 minutes aboard the ancient Ford gave a glimpse of past glory, and the 10-minute demonstration in Stuttgart shows at least one possibility for green aviation.  Just as the best technology of the past forced creation of regulations to make commercial aviation what it is today, new technology – often a product of visionary minds – will require visionary planning and regulatory wisdom to help it fulfill its promise.