Frances White of the Pacific Northwest National Laboratory (PNNL) reports that a new anode quadruples the life of a test lithium-sulfur battery and could lead to much lower costs for electric vehicles and large-scale energy storage.

This blog has noted that many researchers focus on development of better cathodes, or anodes, or electrolytes exclusively, neglecting a more holistic, or whole battery approach to their delving.  PNNL scientists have a reason for focusing on anodes, having found that a “battery with a dissolved cathode can still work.” 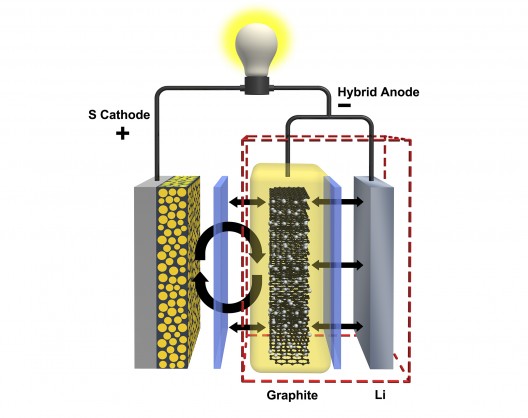 What dissolves the electrodes in a battery?  “Unwanted side reactions,” according to PNNL, cause the battery’s sulfur-containing cathode to disintegrate slowly and form polysulfide molecules that dissolve into the battery’s electrolyte liquid.  This becomes a thin film that forms on the surface of the lithium-containing anode, and grows until the battery will no longer operate.

Rather than trying to stop sulfur leakage from the cathode as others have, PNNL added a protective graphite shield to the a node.  This “thin matrix of connected carbon molecules,” common in lithium battery anodes, keeps the sulfur side reactions away from the anode’s surface and prevents growth of the thin film that eventually stops ion movement to the anode.

Their anode is unique in being a hybrid combination of graphite from lithium-ion batteries and lithium from conventional lithium-sulfur batteries.  PNNL Laboratory Fellow Jun Liu and his research team found this quadrupled longevity for their battery.  Normally, lithium-sulfur batteries with conventional anodes stop storing energy after about 100 charge-and-discharge cycles.   The same batteries with PNNL’s hybrid anode “worked well past 400 cycles… and tested under the same conditions.”

Lui reports that even though “Sulfur is still dissolved in a lithium-sulfur battery that uses our hybrid anode…tests showed a battery with a hybrid anode can successfully be charged repeatedly at a high rate for more 400 cycles, and with just an 11-percent decrease in the battery’s energy storage capacity.”

As always in such reports, the authors lay in a few caveats, noting that research done with small, thin-film test batteries may not show similar results with versions we might plug into our EVs or energy-storage centers.  “Liu noted tests with a larger battery system would better evaluate the performance of PNNL’s new hybrid anode for real-world applications.”

He added, “Lithium-sulfur batteries could one day help us take electric cars on longer drives and store renewable wind energy more cheaply, but some technical challenges have to be overcome first.  PNNL’s new anode design is helping bringing us closer to that day.”

Research was supported by the Department of Energy’s Office of Science (BES), with additional support from DOE’s Advanced Research Projects Agency-Energy, and DOE’s Office of Energy Efficiency and Renewable Energy.  Some of this research was performed at EMSL, DOE’s Environmental and Molecular Sciences Laboratory at PNNL.